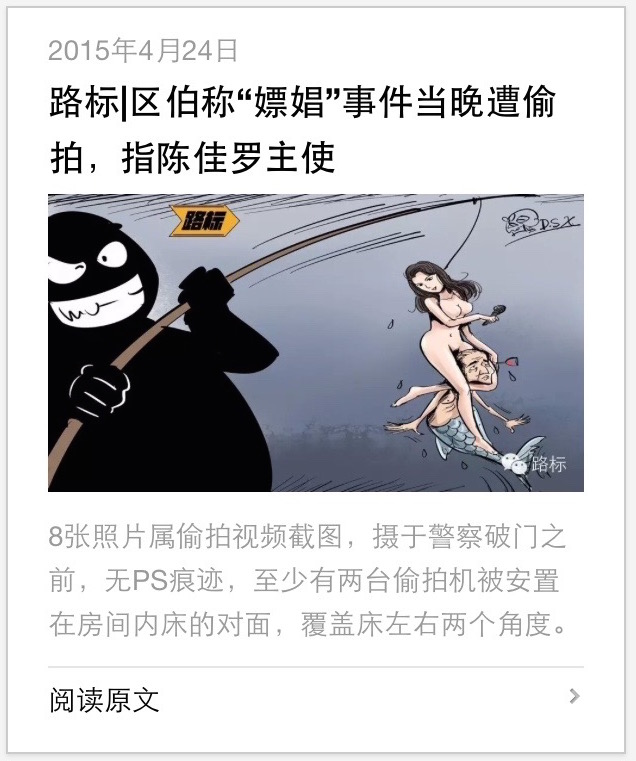 All websites must delete reporting by Lubiao (WeChat public account) on the “Uncle Ou prostitution case.” Strictly control related harmful information and commentary, and filter content which takes the opportunity to spread malicious attacks on our relevant judicial departments and system. In particular, strengthen the management of search engines and interactive elements to avoid vicious speculation. (April 25, 2015) [Chinese] 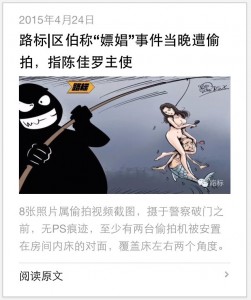 The WeChat public account Lubiao, or “Signpost” (WeChat ID @landmark163), has posted several articles about Ou Shaokun, the anti-corruption activist who was detained for five days in March for allegedly soliciting a prostitute while in Changsha, Hunan. Ou denies the charge, claiming that he was framed by Chen Jialuo, a local businessman who took Ou to karaoke and sent the woman to his hotel room. Netizens turned the human flesh search engine on Chen, who many now believe is Captain Chen Jianluo of the Changsha Domestic Security Department.

Lubiao has posted several articles about Ou Shaokun and Chen Jialuo. One is an investigation of the four companies Chen Jialuo is said to manage, claiming that none of the enterprises are traceable in the public record. “Day Ten of Uncle Ou’s Release: They Tried to Pay Me Hush Money,” reads the headline of another post.

Earlier propaganda directives from March 30 and April 7 instructed websites to “cool down” their coverage of Ou Shaokun, but netizens and Ou himself have continued to clamor about the case.

Two of Lubiao’s posts are available at CDT Chinese.