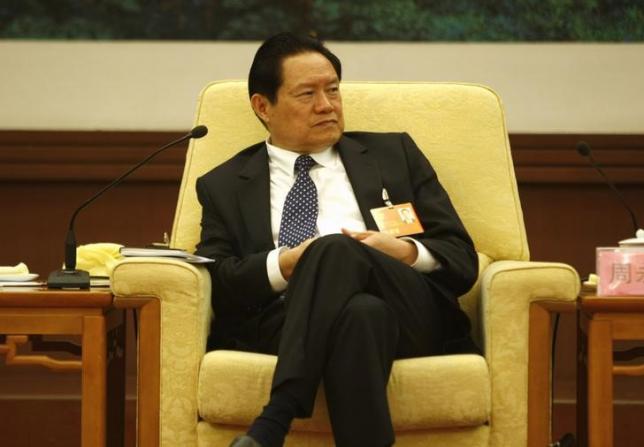 As China’s former security chief Zhou Yongkang awaits trial for “bribery, abuse of power and intentional disclosure of state secrets,” Reuters’ Benjamin Kang Lim and Ben Blanchard report that the latter charge may be linked to a warning from Zhou to his protégé Bo Xilai:

Sources with ties to the Chinese leadership said Zhou, 72, stood accused of tipping off Bo that he was about to be sacked in early 2012 as party boss of the southwestern metropolis of Chongqing and a member of the decision-making politburo.

[…] Before Bo’s downfall, Zhou had recommended that Bo succeed him as domestic security chief on the party’s Politburo Standing Committee – the apex of power in China – sources with direct knowledge of the matter have previously told Reuters.

They have also said President Xi Jinping was determined to bring down Zhou for plotting such appointments to try to retain influence after the party’s 18th Congress in November 2012, when Xi took over the party and Zhou retired from the standing committee. [Source]

Shannon Tiezzi summarized speculation over the state secrets charges at The Diplomat last week, noting a statement by the Supreme People’s Court in March that Zhou and Bo had “trampled on rule by law, wrecked party unity and engaged in nonorganizational political activities.”

A Beijing Youth Daily article interpreted “nonorganizational political activities” to mean political activities that defy the direction of Party leadership, going against the Party and betraying the Party’s objectives. That same article quoted Zhuang Deshui, an expert on corruption at Peking University, as saying that Zhou and others had tried to follow in the footsteps of China’s infamous “Gang of Four,” who were accused of seizing political power during the Cultural Revolution.

That’s the closest Chinese official media has come to substantiating the rumor that Zhou and Bo were actively seeking to wrest power away from Xi Jinping. As Willy Lam, an expert on Chinese domestic politics, told the Washington Post, Zhou and his faction “did not believe that Xi Jinping was qualified to be general secretary.” While Lam says there’s no evidence Zhou and company were planning an actual coup, “they did form an organization inside the party to go against Xi Jinping.”

The rumors also hold that Zhou sought to use his position as China’s domestic security tsar for his advantage in the political infighting – including the possible use of wiretaps and other surveillance directed against political opponents. That could potentially be tied to the official charge against Zhou of “disclosing state secrets.” [Source]

Lam recently suggested that Xi may be planning to extend his rule beyond the usual ten-year term. In 2012, rumors of a coup by Bo’s allies led to a three-day suspension of comments on Sina Weibo.

Combined charges in the case could carry the death penalty, but that's all based on the graft charge. Period.

Article 398 states that for state officials, the charge can bring up to seven years in prison in “especially serious” cases.

After two years of piecemeal detentions and few details from authorities, Monday’s one-day trial of Jiang Jiemin, who ran China National Petroleum Corp., was the first confirmation that his alleged crimes of bribery and abuse of power were connected to Zhou Yongkang, who once ran China’s powerful national-security apparatus.

[…] The court said Mr. Jiang admitted his guilt and apologized. State television showed him with a blank face standing in court in a windbreaker and flanked by a pair of police officers who gripped each of his elbows

[…] Mr. Zhou preceded Mr. Jiang in his role as head of China National Petroleum. The two men had worked together in the oil industry. Mr. Zhou later went on to become a member of the Communist Party’s all-powerful Politburo Standing Committee, where he oversaw the courts, prosecutors, police and prisons before his retirement in the orchestrated political transition that brought Mr. Xi to power. [Source]