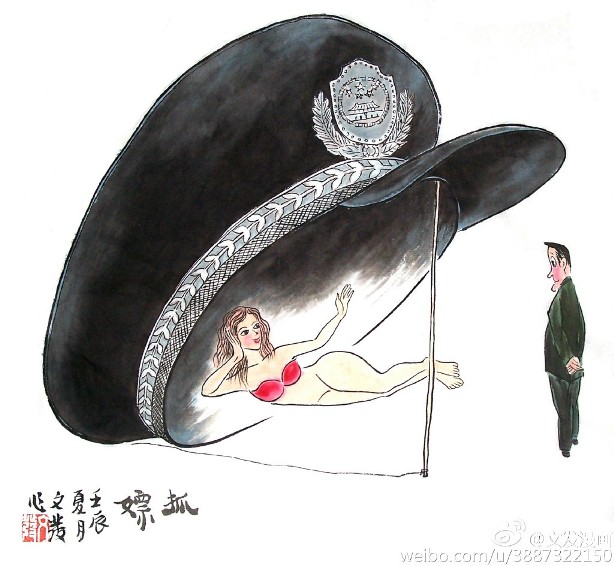 Ou Shaokun is a Guangzhou-based activist known for exposing the personal use of public vehicles by uploading photos of license plates to social media. On March 26, 2015, Ou uploaded several photos to Weibo from Shaoshan, Hunan. A supporter later took him to dinner and karaoke in Changsha with Chen Jialuo. A woman from the karaoke parlor came to Ou’s hotel room later that evening. She undressed and they began to kiss when the police raided the room, took photos, and detained Ou. Ou now plans to sue for what he claims was a set-up in revenge for exposing official corruption.

Netizens sicced the “human flesh search engine” on Chen, leading some to suspect that he is the captain of the Changsha Domestic Security Department. This only added to the sense that “Uncle Ou” had been framed. By adding the passive marker 被 bèi to the verb “solicit a prostitute” (嫖娼 piáochāng), netizens invented a name for the punishment exacted on Ou.

Ou’s case is similar to that of Chinese-American businessman and Weibo celebrity Charles Xue, who in 2013 was detained for soliciting a prostitute, only to appear on national television confessing to “irresponsibility in spreading information online” several days later. The prostitution charge appeared to be an excuse to publicly shame Xue for his outspokenness online.