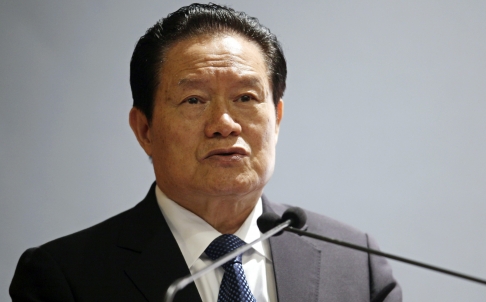 The investigation into former security chief Zhou Yongkang has taken another turn with accusations that he ordered surveillance of top leaders including President Xi Jinping. The revelations may be linked to the charge of “revealing state secrets” that was filed against Zhou earlier this month. Bloomberg reports:

The investigation showed that Zhou used phone taps and other methods to gather information on the family assets, private lives and political stances of China’s leaders, according to one of the people, who asked not to be identified because the information is confidential.

[…] The investigation into Zhou found that Liang Ke, the former director of the Beijing Municipal Bureau of State Security, helped him gather information on party leaders, one of the people with knowledge of the probe said.

Former deputy police chief Li Dongsheng released some of the information to overseas Chinese language websites, the person said, without specifying the websites. Li, who has been charged with bribery, and Liang, who has been removed from office but not officially announced as under investigation, couldn’t be reached for comment. [Source]

Liang Ke was detained in February 2014 and at the time he was reportedly suspected of illicitly passing on information to Zhou Yongkang.

Zhou Yongkang has been linked to fallen Chongqing party chief Bo Xilai; some sources have told journalists that the “leaking state secrets” charge against Zhou stems from his warning Bo about his imminent dismissal from his position in 2012. During the investigation of Bo, he was accused of wiretapping the phones of top officials, including then President Hu Jintao. (While this was the highest-level case to be revealed, mutual wire-tapping among Chinese officials is common enough that one detective dismantled 40 hidden wires and cameras from officials’ offices in one week, according to a 2012 report in Southern People Weekly.) The 2014 work report of the Supreme People’s Court accused Zhou and Bo of engaging in “nonorganizational political activities,” which many interpreted as meaning they were accused of staging some form of political plot against the current leadership.