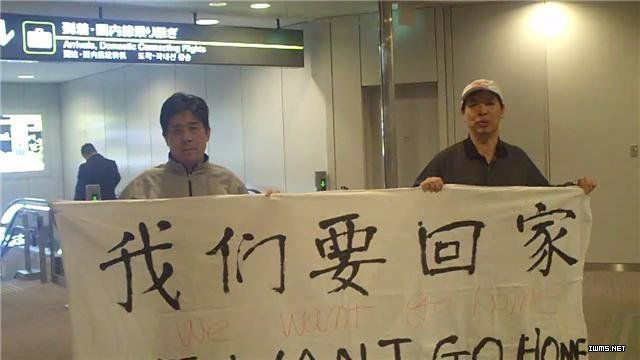 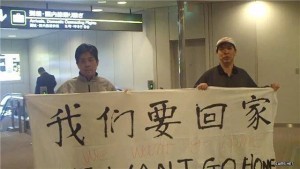 Today is my 23rd day camped outside Japan.

In the morning, I received calls from four reporters, and we scheduled follow-up interviews for next week.

My encampment has already become a familiar “home” to me. Although it’s only as big as a bench, it has become a window onto China’s human rights situation. The whole world has taken notice. I am a guest here, but I’m also in charge of this home. I will place great importance on its international image and strive to keep it clean, tidy, and pleasing to the eye. I tidied it up again this morning, in keeping with custom.

After I last updated the English message on my whiteboard, some Internet friends sent me suggestions about how I could further tweak it. One person, a very enthusiastic Mr. Xu from Hong Kong, sent me ten different versions to consider. He even suggested I write certain keywords in all capital letters, making use of some principles of visual advertising. I adopted the last of his suggested versions: “Stuck here for 23 days is a Chinese citizen who exposed corruption, helped the poor and has been denied entry into China 8 times by the Chinese authorities.”

At noon, two Immigration Bureau personnel came to visit me at my encampment. One of them, an official I speak with often, asked me, “Can I take pictures of your living space?” I happily agreed. “Sure, take pictures of whatever you like.” He took a string of photos of today’s layout of my “room.” The whiteboard was captured by his lens, and its contents will become the archival material of the Japanese authorities. This was a first. I was not sure for what specific purpose he was taking the photos. At least it would give Japanese leaders a look at what the situation was like here.

At 3:30 p.m. a producer from CBS, Mr. Jiang, visited me for an on-site interview. A while later, Federation for a Democratic China Chairman Huang Ben and Director Wang Min visited me from Los Angeles. They gave me a DVD player, a copy of “The Terminal,” and a headset, and expressed the personal greetings and support of Zheng Cunzhu and Yang Wei. They brought a banner that said “We want go home.” We took a picture together. I am extremely grateful that these renowned democracy activists came to visit from the U.S. When it comes to the human rights of Chinese citizens, there should be no separation based on religious or political grounds. We can all stand together. If the Chinese Communist Party sent people to visit me, I would welcome and thank them. [Chinese]