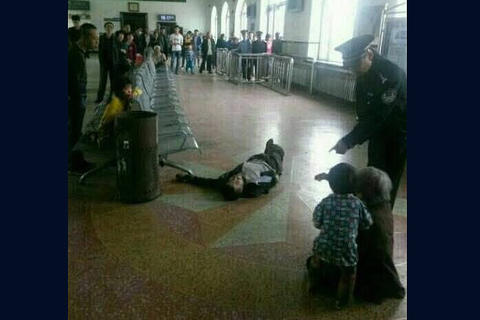 In recent days, many Internet users in China have been closely following the story of Xu Chunhe, a 45-year-old man who was shot to death by police in a train station in Qing’an County, Heilongjiang. Initially, official media reports claimed that Xu began punching a police officer named Li Lebin and then threatened to grab his gun. Xu was also accused of throwing his young daughter toward the police officer. Li responded by shooting Xu, killing him on the spot in front of his three children and elderly mother. However, once the story was released, netizens immediately raised a number of questions, including whether Li had followed proper protocol in firing his weapon and whether Li initiated the violence by attacking Xu first.

Police have so far refused to publicly release the full surveillance footage of the incident. A video clip posted by Boxun shows the men tussling and Li hitting Xu with a stick:

According to an AP report, Xu was attempting to travel to Beijing to ask for help caring for his children, as his family was impoverished, he suffers from medical ailments, and his wife has psychological problems:

Lawyer Xie Yanyi, who is working with Xu Chunhe’s family on the case, said Xu, his mother and three children were on their way to the capital when train station security officers in Harbin recognized them and barred them from buying tickets.

Southern Metropolis said Xu blocked other travelers at the security checkpoint but was subdued by police. Once released, he clashed with a police officer, who hit back with a baton, the newspaper said.

It said Xu then grabbed the baton and used it to beat the policeman before the officer drew a gun and shot him in his chest. [Source]

Xu’s cousin has provided a different account, according to a report by Didi Tang of AP:

Xie Yanyi, a lawyer for Xu’s family, said he believes the officer had no compelling reason to fatally shoot Xu and that he should be investigated on charges of murder.

Local authorities said Li came to the scene when Xu barred other travellers from checking into the station and that Xu swore at the officer.

“He boxed at the police officer, knocking off his cap,” police supervisor Zhao Dongbin told local media. “He said he would try to grab the gun . . . and it would have been unimaginable if he had seized the gun.”

Xu’s cousin, Xu Chunli, told local media the officer hit Xu so hard with the baton that Xu had blood on his head and face. Once Xu grabbed the baton, the officer pulled the gun, the cousin said.

The police account doesn’t say what prompted Xu to cause a scene at the station. The cousin said Xu grew upset when he and his family were prevented from boarding the train. [Source]

Xu’s mother, Quan Yushun, said her son told her he was in a bad mood and wanted to travel to Dalian, a large city in the province of Liaoning, to see an aunt. On May 2, he took his mother; daughter, 7; and two sons, aged 5 and 6, to the Qingan Railway Station and bought tickets.

The family had lunch at a nearby restaurant, Quan said, and her son drank a glass of strong alcohol and two bottles of beer, before taking the family to the train station’s departure hall.
Quan said her son told her that authorities from their village had been told of their travel plans and he then became agitated.

Wang Shuhua, the Communist Party head of Fengman Village where the family is from, and another official named Deng Limin, both told Caixin that authorities have stopped Quan from heading to Beijing and Dalian to beg for money on the streets several times.

Wang said the village has spent 30,000 yuan to stop Quan from begging in big cities, where it is more lucrative than in smaller towns. [Source]

Another Caixin report explains that the case has generated online discussion because it has raised questions about the reliability of China’s police force, many of whom now carry guns but may not have the proper firearms training:

The incident has triggered a lot of online discussion, and many people want the government to release the surveillance video. People are also questioning whether the officer followed the proper protocols when he used his weapon and whether he had no choice but to fire.

These worries underscore the public’s lack of trust in the police, said Li Yuanqi, a law professor at Renmin University in the capital, a problem that has its roots in flaws in the rules for when China’s police officers can use deadly force.

The incident probably would not have triggered any controversy “if it really was a violent attack on a police officer, and there is solid evidence that he indeed tried to take control of the gun,” the professor said. [Source]

Netizens have expressed their outrage at the lack of police accountability in this case. From Weibo:

WoAiKanxiangXingfuChufa (@我爱看向幸福出发): He wasn’t allowed on the train because he was a petitioner. It’s obvious that his moving his daughter out of the way was branded as throwing the child towards the police; and it’s obvious that his shove was branded an attack on police in an attempt to take a gun. After police murder, municipal leaders first look after the police since they are immediately deemed heroes, and the tragically killed petitioning peasants immediately deemed the malefactors! Shandong TV’s broadcast of an investigation into the truth was abruptly halted halfway through. All truthful Internet posts were deleted. I can only say, the five fingers of an extended hand cannot be seen if it’s already so dark… [Chinese]

Also on Weibo, lawyer Zhang Xuezhong, who was removed from his post at East China University of Political Science and Law in 2013, allegedly for writings critical of the CCP, commented on how this case serves as yet another example of how the decks are stacked against ordinary Chinese citizens. The post was censored, but can be seen via FreeWeibo:

ZhangXuezhong (@张雪忠): Because of Internet videos and official performances, I’ve decided that the Qing’an police shooting exemplifies the humiliation and murder of those on the lowest rungs of society. However, I absolutely do not count on our dictatorial authorities to conduct an investigation and publish the truth about these kinds of incidents. After Xia Junfeng was executed, Supreme People’s Court President Zhou Qiang said bluntly, “If Xia Junfeng were not put to death, society would be in chaos.” The political considerations behind the execution of Xia Junfeng for rebelling against chengguan and the shielding of police for shooting dead ordinary citizens are one in the same—they both stem from requirements of the dictatorship to “maintain stability”: from the point of view of the violent, repressive dictatorship, violent resistance used by ordinary citizens must be strictly punished, but violence used by agencies or personnel to maintain social stability must be accepted, tolerated, and even indulged in. [Chinese]

Police have reportedly offered Xu’s family 200,000 RMB ($32,200) in compensation but they have refused to accept the money. Xu’s mother is planning to sue the police for his death, according to an RFA report.

A group of 22 lawyers has sent a petition to the Supreme People’s Procuratorate asking for a full investigation into the case. Official Chinese media have now also joined calls for a full and transparent investigation.

Update: Thursday, May 14, 22:00 PST: On May 14, CCTV released edited surveillance footage which shows Xu being aggressive toward Li and throwing his daughter on the ground. From AP:

One of Xu’s lawyers, Xie Yanyi, has said that the policeman, Li Lebin, should be investigated on charges of murder. Another lawyer for the family, Li Zhongwei, said the video footage rmay have left out scenes in which Xu is beaten by the policeman.

The security footage shows the man punching the officer in the head and later wrestling away a 2-meter (6-foot)-long baton the officer used to try to subdue him and then using it to attack the officer.

At one point, while the officer is trying to hit the man with the baton, the man picks up his small daughter and holds her in front of himself before hurling her down onto the train station’s paved floor. [Source]