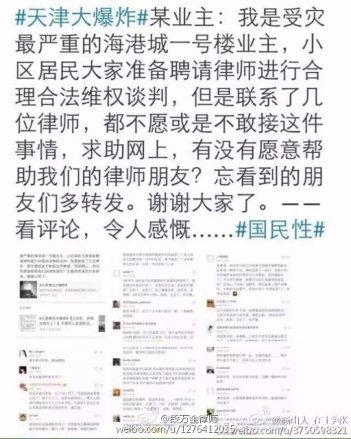 Following the series of explosions that devastated the port area of Binhai outside of Tianjin earlier this month, Weibo user DuanMojinLüshi (@段万金律师) reposted a screenshot of an affected Binhai homeowner’s appeal for legal help. The post was deleted from Weibo, but can still be seen in the FreeWeibo archives: #TianjinExposion A homeowner: I own a property in the hardest hit [of residences], Haicheng Tower 1. Neighborhood residents were preparing to hire lawyers to conduct reasonable, legal rights defense negotiations, but after contacting a few, discovered none are willing, perhaps because they don’t dare touch this affair. We’re now seeking help online. Are there any lawyers willing to help us? Please forward this if you see it. Thanks to everyone. Look at the comments, they’ll move you. #NationalCharacter (August 23, 2015) [Chinese]

One such comment, also deleted from Weibo but available via FreeWeibo, suggested that last month’s so-called “Black Friday” detention of over 300 activists and rights lawyers, some of whom remain in police custody, may have scared lawyers away from considering cases related to an issue as sensitive as the Tianjin blasts:

NanjingLiXun (@南京李汛): After the Tianjin explosions, owners in a hard-hit neighborhood discovered there was no one to address grievances to, and no lawyers could be found for hire. Two months earlier, daring lawyers were snatched up and detained. ——All of a sudden I realize that the Communist Party really is great! It has such foresight! (September 23, 2015) [Chinese]

While the crackdown affected lawyers from across China, the New York Times’ coverage of Liang Xiaojun, a rights lawyer who was recently was prevented from boarding a New York-bound plane, notes his suspicion that Tianjin authorities could have issued the prevention order. Didi Kirsten Tatlow reports:

“They said I might endanger national security,” Mr. Liang said.

He said he believed the order may have originated with the Public Security Bureau in Tianjin, a city about 90 miles southeast of Beijing, where many of the lawyers are detained and which many lawyers see as the center of the crackdown.

“If the Tianjin Public Security Bureau issues a nationwide order, then the public security bureaus in other cities have to obey,” he said. […] [Source]