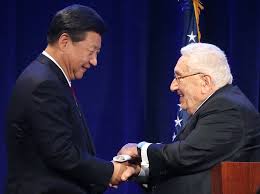 On Tuesday in Seattle, President Xi Jinping delivered a policy speech to an elite group of business leaders, in which he presented a positive spin on a number of thorny issues facing the two countries; he vowed to work with the U.S. to fight cybercrime, and said that after a period of instability, the Chinese stock market “has reached the phase of self-recovery, and self-adjustment.” The full text of his speech can be read via Geekwire, or watched via YouTube:

As part of his effort to appeal to the American public, he also dropped several references to American pop culture. From Philip Wen at the Sydney Morning Herald:

He said the movie Sleepless in Seattle had made the city “almost a household name in China”.

And in a glib deflection of long-standing suggestions that his anti-corruption campaign was aimed at eliminating political rivals, Mr Xi said: “This has nothing to do with power struggles. In this case, there is no House of Cards.” The series enjoys a cult following in China and Wang Qishan, the head of Beijing’s anti-corruption body, is known to be a fan. [Source]

New York Times reporter Jane Perlez, who is traveling with Xi, reports that his comments about American literature were also well-received by some in the audience:

There were murmurs of appreciation about his reading of American classics by Thomas Paine, Henry David Thoreau, Walt Whitman, and Jack London.

He particularly liked Ernest Hemingway’s “The Old Man and The Sea,” and recalled tracking down a bar in Cuba where Hemingway drank and ordering a mojito.

A longtime China hand, Stephen Orlins, the president of the National Committee on United States-China Relations, a sponsor of the dinner, said Mr. Xi won points for projecting his personal tastes.

“His fondness for Hemingway and going to the bar in Cuba were successful attempts to tell us who he is and what makes him tick,” Mr. Orlins said. [Source]

In another report, Perlez writes that Xi presented the many complicated issues he and Obama are facing in a positive light:

The tone of Mr. Xi’s address across a range of issues was positive, without a jarring word. He refrained from talking about thorny differences with the United States over China’s construction of artificial islands in the South China Sea. On China’s softening economy he sounded a soothing tone, saying that all economies faced difficulties and though China was under downward pressure “this is only a problem in the course of progress.”

He also told his audience not to worry about the Chinese stock market, whose sudden plunge over the summer sent shock waves across the world. He defended his government’s intervention, which failed to stop the fall, saying the “government took steps to stabilize the market and contain panic in the stock market and this avoided systemic risk.” [Source]

“With a high savings rate and huge consumption potential, a hard working population and a rising proportion of middle income people, now we have 300 million middle income earners in China,” said Xi. “China will focus more on improving the quality and efficiency on economic growth, and accelerating the shift of growth model and adjustment in economic structure. It will lay greater emphasis on innovation and consumption driven growth, and in this way will solve the problem of unbalanced, uncoordinated, and unsustainable development.”

Coincidentally, just around the time Xi took the stage, Chinese media outlet Caixin reported that China’s manufacturing PMI, an index that measures growth in the manufacturing sector, dropped to 47.0 for September, the lowest it’s ever been six years. [Source]

Nevertheless—as Duke University’s Taisu Zhang wrote in a ChinaFile discussion about the speech—in attempting to define the so-far nebulous “Chinese Dream,” Xi appeared to accentuate economic progress over other social and political gains:

On Sept. 22, however, he gave a startlingly clear and concise description of the dream that focused almost entirely on the economy. He framed it in terms of China’s success in pulling much of its population out of poverty, in terms of its rapid growth over the past two decades, and its continued commitment to economic reform. He went so far as to acknowledge that the “fundamental task” of any Chinese state — its primary claim to legitimacy — is to manage and develop the economy.

It is dangerous, of course, to read too much into one speech, but these claims do seem to diverge somewhat from the Chinese Communist Party’s tendency in recent years to aggressively seek non-economic sources of legitimacy. Many commentators believed that, with the ongoing slowdown and restructuring, the party leadership would want to (continue to) seek new means of garnering public support, including cracking down on corruption, trumpeting the “rule of law,” adopting a more aggressive diplomatic posture, embracing “traditional culture,” and rejuvenating “Chinese socialism” as a viable sociopolitical ideology.

But Xi’s Seattle speech seemed to echo the ideological stance of the Jiang and Hu eras in emphasizing economic development above all else. Does this mean that the party leadership is feeling more optimistic about its economic prospects than outside observers seem to recognize, or is it simply acknowledging the unavoidable truth that its political fate and legacy will ultimately be determined by its economic performance? [Source]