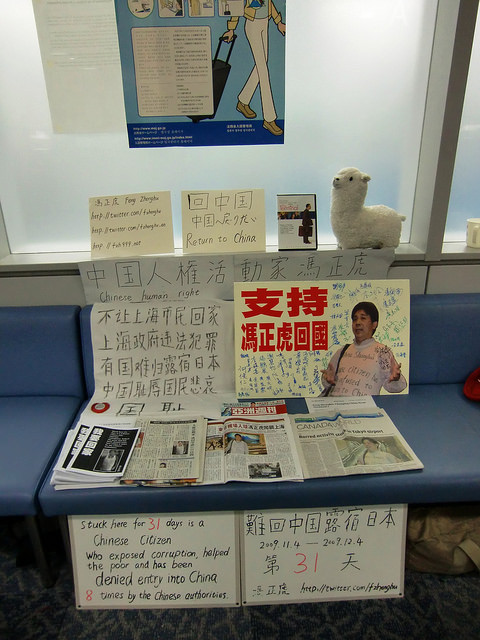 Today is my thirty-first day camped outside the door to Japan.

Yesterday, a CNN reporter informed me, “Tonight at 7:00 p.m., CNN will broadcast your interview. If you don’t have a TV, you can also watch online.” This morning I found the CNN link online.

I also found a link to a CBS interview from a few days ago, titled “Feng Zhenghu: Changing China from Terminal 1.”

Mr. Motoyoshi from The Narita International Airport Corporation’s marketing department gave me the interview schedule for early December. Aside from being unable to give any on-site interviews on the 5th, 6th and 11th, on all other days I’m allowed to grant interviews between 10:00 a.m. and 3:00 p.m. Of course, phone interviews are not subject to any time or location restrictions.

At 1:30 p.m., the chief examiner of the First Airport Immigration Examiner’s Office once again came to deliver a written warning. The content was the same as yesterday’s, only the date was different. They handed it to me in the same way, as well–one examiner handed me the document while another took a photograph, in order to prove that I had been notified. I think they’ll repeat this again tomorrow.

Japanese people play by the rules. In their professional capacity, this is all they can do regarding my situation. They don’t have the legal right to kick me out; all they can do is present me with a notice each day. Actually, they understand very clearly that these notices won’t have any effect on me. I’m Chinese, and they don’t have the right to force me to enter Japan. The Chinese authorities won’t let me return to my country, and so I have no choice but to stay here. When the Japanese government presents me with these notices, they know they are really presenting them to the Chinese government. The Chinese government knows about my daily situation through media reports. Japan is putting pressure on the Chinese authorities.

At 2:30 p.m., a United Airlines flight attendant, a Chinese-American or a Taiwanese woman, brought me a bento, a container of congee, two steamed buns with meat filling, and two tangerines. Judging from the packaging, the food appeared to be from Taiwan. And it was hot. Surely she had heated the food on the plane to take it to me. I truly want to thank this flight attendant for her attentive care. She also brought me an issue of Asia Week (2009, issue 46). I was pictured on its cover. My interview with Mr. Mao Feng was printed inside. The flight attendant asked, “If you have any problems, let us know. We’ll help you.” I replied, “I don’t have any problems right now.” I then gave her a few copies of my “I Want To Go Home” brochures, asked her to share them with her colleagues, and thanked everyone.

As I was writing a Twitter message at 3:55 p.m., I received a phone call from a public telephone. He and I both used Japanese to ask each other, “Who are you?” He was a Chinese international student, so I switched to Chinese. He told me, “I just passed through your area. I now know about your situation. You’re remarkable, willing to stand up like this. You are right to do so. I want to tell you that I support you, but I’m calling you from a public phone because I don’t dare to use my cell phone. I’d be a bit scared to use my own cell phone.” I told him, “The fact that you’re willing to call and express your support, even from a public phone, shows you’ve already taken the first step. I thank you for your support. Once you eliminate all of your fear, you’ll be able to call me from your own phone. Once each person eliminates all of the fear in his or her heart, that person will then become free, and dare to defend their own rights.”

At 5:45 p.m., those Air Canada flight attendants that gave me a copy of Canada World a few days ago once again showed up in my area. They brought me a bag of various things, including an electric water heater, a thermos, a blanket, tea, and a container of ramen. I kept only the ramen. I already have the other things, or in any case don’t need them right now. She spoke Japanese, so we chatted for a while in Japanese. I gave her a few copies of “I Want To Go Home.” Here, I want to convey a special thanks to the citizens of Hong Kong. Their carefully crafted brochure has become a great thank-you gift.

At around 8:00 p.m., I was on my computer over at the counters used for filling out entrance cards. I turned around and saw a flight attendant standing in my residence area. She was putting a bag of items on my “bed.” I walked over. One look, and I knew she was Chinese. She said, “We just read about your situation. What the Shanghai government did to you was so wrong. You don’t have any demands—you just want to return to your country, to your home. How could they deny you this? You truly love your country. If you didn’t, you’d be leading a completely great life somewhere abroad.” She asked me, “Can you speak Shanghainese?” “Yes,” I replied. We spoke for a while in Shanghainese. There’s something especially endearing about meeting someone from your own hometown.

She went on to say, “I saw on Twitter that you don’t need food, so I brought you a rubber hot water container and a few white undershirts. You can wear them or even write things on them.” I thanked her. She then said, “There are a lot of flight attendants that come see you, but it seems like there haven’t been any Chinese ones. If you have any problems, we will help you.” I told her, “Indeed, you are the first flight attendant from Shanghai to come see me.” It was true. This attendant from Shanghai was making up for all Chinese flight attendants, demonstrating that they, too, harbor a sense of justice and love. They’re not simply pretty on the outside yet cold on the inside. Earlier today, when a reporter was interviewing me, I was asked about why there haven’t been any Chinese flight attendants coming to see me. But now, I have reported this visit from a Shanghai flight attendant on my Twitter page. [Chinese]