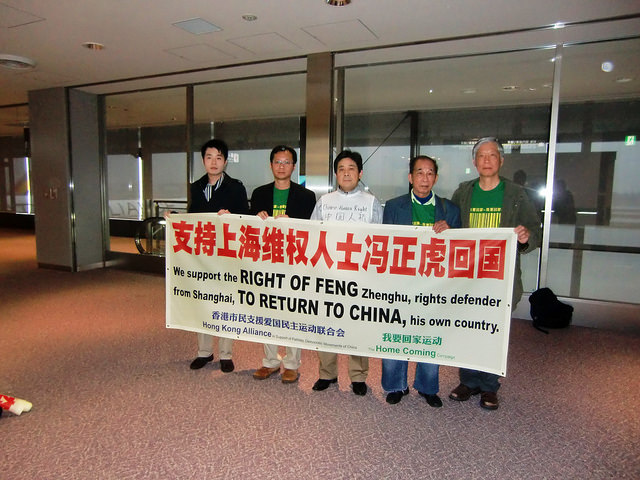 Today, December 3, is my 30th day sleeping on Japan’s doorstep.

At 10:45 last night, a call came from the United States. It was Mr. Wei Jingsheng calling to check in on me. A few days ago he asked his friend in Japan, Mr. Lin Fei, to convey his greetings. Today he called to give his personal support for my effort to return home. “I’m really concerned about the issue of your return,” he said. “You did the right thing, you know. The right of return is the most basic of human rights. I hope that the various foreign powers do not take advantage of the issue: going home is going home. It’s not like you have any political demands or objectives. ”

Wei Jingsheng’s assistant, Ms. Huang Ciping, also called me to offer the moral and financial support of the Independent Federation of Chinese Students and Scholars (IFCSS). “The IFCSS has already passed a resolution to support your return home, “she told me. “We’re a democratic organization—every resolution we pass gets a certain number of objections. But this time, no one cast a dissenting vote.” I thanked them for their concern and support, and asked Huang to convey my thanks to the IFCSS.

The total number of texts on my Japanese cell phone reached 489 a couple of days ago. I thought that by now it should be more than 500, but when I checked last night the number had actually dropped. I soon discovered that all of my messages from before November 17 had been deleted. It turns out that the mailbox on my phone only has 5120k of memory. When it gets full, it automatically deletes messages. I can’t download the text messages, so if I want to save them all I can do is forward them to and email address one by one. These touching text messages should be saved, so that I can share them with everyone. It’s a shame that all of my texts from before November 17 have disappeared. So now, I’ll make some time forward my texts, and publish some of them once I’ve put them in order.

It turns out that when I forward texts, the address of the original sender gets deleted, and the date is from when I forwarded it. All that gets included are the contents of the message and my phone’s email address. It’s really a shame that the original time and address are lost. If any of my friends want to contact me by email in the future, please send your messages directly to one of my two email addresses: [email protected] or [email protected]. Now that I have Internet access, I can read your emails. Even when I can’t get online, your messages are saved. They really do represent wonderful memories for the historical record.

At 1:45, just as I closed my eyes to gather my thoughts, two officers from the Narita branch of the Immigration Control Bureau in Tokyo and a customs official came looking for me. I already knew them quite well. One of them, the chief inspector for the office here, gave me an official notice in both Chinese and Japanese. The notice was presented in duplicate, with one copy being retained for their records. While he handed it to me, the two other officials took photographs. I suppose this was to prove the exchange had taken place. As soon as the officer gave the document to me, they asked me to sign. “I can’t sign this just like that,” I told me. “Please ask a lawyer to come. I want to ask him if I should sign it. ” Hearing that, they let it go.

“I know that by staying here I’m giving you guys a lot you a lot of trouble. I really don’t want to make trouble. If you let me go home, then there won’t be any more trouble. You should ask your superiors in the Japanese government to send me home. This notice should be given to the Chinese embassy. It’s no use giving it to me, since there’s no way for me to go back to China. Take it with you, I don’t need it. ”

They laughed. “Keep it, there’s no one else we can give it to.”

“Fine, then. I’ll pass it on to the Chinese authorities through the media. ”

My being here has really caused them a lot of trouble, but I’m not breaking any laws. The Shanghai authorities are the real trouble makers here. I’ll pass on the Japanese request to the Chinese government, to let them know they should collect their own national as soon as possible, so that we can all stop holding up the work of the Japanese here.

Since you arrived at Narita International Airport on November 4, you have not filed an application to enter the country. Instead, you’ve remained in the immigration hall. Immigration control is a place for foreigners to enter the country, so it is not possible for you to stay here long term.

Since you have interfered with the normal operations of our branch office, we have asked you on several occasions to apply for entry and subsequently leave immigration control.

This time, we are notifying you in writing to please make an application for entry into the country, and to leave immigration control.

At 2:45 PM, a flight from Hong Kong arrived on schedule in Japan. Szeto Wah, chair of the Hong Kong Alliance in Support of Patriotic Democratic Movements in China, quickly found me, along with Vice-Chair Cai Huichang, Standing Committee Member Li Yaoji, and Reverend Chu Yiu-ming, chair of the “I Want to Go Home Campaign,”  bringing with them the love and support of the people of Hong Kong. They also brought a large sign with the words “Support Feng Zhenghu’s Return Home” printed on it, along with a blown up picture of me, bearing signatures of support from both well-known figures and ordinary Hongkongers. An exquisitely edited pamphlet titled “I Want to Go Home” included chapters on rights defense warriors, my eight attempts to return to China, pledging to fight to the death, legal foundations, support from all walks of life, and my airport diary, plus pictures. It really was a rather distinguished gathering.

The Hongkongers are not only enthusiastic in their concern, they are also meticulous. They’ve thought of everything. From the electric kettle given to me by Miss Chan of Hong Kong University to the materials brought today, every last thing they brought fulfilled a pressing need. This time they even brought a rice cooker and a bag of rice. It really is starting to look like I’m going to put down roots here and make this my home. Thank you, people of Hong Kong, for your gifts. While I deeply appreciate your thoughtfulness, unfortunately I can’t use these things here, so I’m asking you to take them back to Hong Kong, along with a few other items I already have.

Mr. Wah also brought a big banner which reads “Support Shanghai Rights Defender Feng Zhenghu’s Return Home.” We went to the press area on the fourth floor for  interviews with reporters from the BBC, Asia Weekly, and Epoch Times, since they can take pictures and film there. Finally, Mr. Wah gave me a piece of his calligraphy, the second line of a famous poem by the reformist Gong Zizhen (1792-1841), written in response to his critics in the Qing government:

I fly home through the inky river-sky

A bent plum tree defies the powers on high

I thanked Uncle Wah, so revered by Hongkongers, and asked the group to convey my heartfelt thanks to the people of Hong Kong. [Chinese]