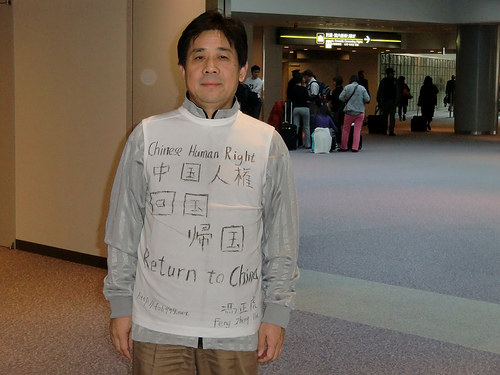 Today is December 6, my 33rd day encamped outside the gate to Japan.

I was very sleepy yesterday. I went to “bed” at 11 p.m. sharp and slept straight until 5 a.m., when I woke up to use the restroom. I returned to “bed” and continued sleeping. At 7 a.m., travelers began arriving at the immigration hall. Staff busily went about their work. The chief examiner came up to my bed and laughingly said,”Feng-san, your pants are showing, how embarrassing!” I replied, “What is there to be shy about? My government isn’t shy about anything. What do I have to be afraid of?” The Japanese speak very vaguely. They don’t directly express their requests. I knew he wanted me to get up. It wasn’t good for this place’s image to have me laying here.

After getting up, I continued dozing, sitting in my chair. At 8:30, I went to boil some hot water. I ate a small cup of noodles and two tea eggs. After breakfast, I continued sitting with my eyes closed, trying to recuperate some energy. I didn’t write a single thing this morning. I spoke quietly on the phone, too. I was resting up as best I could, in order to allow myself to recover as quickly as possible and get my energy back.

Because I finally got sick yesterday and developed a fever, my whole body is weak. But I have prison experience, so I know how to deal with this kind of situation. I wasn’t worried at all, nor did I tell anyone about it. I just continuously drank large amounts of warm water. I ate the entire three packages of fruit that my Japanese friend brought from Singapore yesterday. I conserved as much energy as possible. I did nothing other than some writing. I even spoke softly while on the phone. Whenever I had a moment, I groggily dozed off in my seat. In the afternoon and evening, I took four pills of an American cold medicine. I had a good sweat, and my fever broke. But I was quite exhausted.

Last night I got a full night’s rest, and this morning I spent hibernating. I recovered by noon, surviving yet another test—and gaining experience on how to handle this kind of situation. As long as I make sure I get enough rest, I won’t get sick. Write less, speak less, sleep more. And meditating in my seat with my eyes closed isn’t a bad form of rest either.

At 1:30 p.m., the chief examiner on duty today once again came to present me with an official notice. It was the same as yesterday’s. I took a look and noticed that they forgot to fill in the date, and I immediately asked them to fill it in. In an open spirit of cooperation, I even invited the staff member who took our picture to take another one. I knew that by making things convenient for them, I was making things more convenient for myself as well. After all, they were just doing their job. Let’s all politely get our work done together. I will once again forward this new document on to the Chinese government.

At 12:45, I walked out of the main hall looking for a place to get some sun. Sunlight shines down on a part of a hallway in Building 4 during this time of day. The middle part of the roof over that hallway is made of glass, and direct sunlight pours through at high noon each day, right down onto the automatic moving walkway. Japan is one hour ahead of China. At 12:30 p.m. Japan time, the direction of the sunlight slanted slightly over to the left of the moving walkway. I walked around in the sunlight, bathing in it. But I got there a little late. After just 15 minutes, the sunlight had already moved away. I found another place where the sun was still shining and continued sunbathing for another 15 minutes before returning back to my encampment. As this was my first time going out to get some sun, I didn’t want to be gone for too long. If the employees of the Immigration Bureau saw I wasn’t in my camp, they’d surely start worrying. After all, I am their responsibility.

This is the first time I’ve gotten any sun in 33 days. To “prisoners,” sunlight is a scarce resource. I’ve already become familiar with my surroundings here. I’ve done what I need to do. For the most part, my job is complete. Since I will be here for another long period of time, I will adjust my schedule appropriately, make some improvements to my living conditions, and do as much as I can to make my residence as suitable as possible for someone who cannot return to his own country–or at the very least make it so it doesn’t do me any bodily harm.

At 5:30 a flight attendant from Shanghai brought me a thermos. I was grateful. I’ve really needed one of these. Most days, when I’m not sick, I’m fine just drinking cold water, so I didn’t keep the thermos that the Air China attendant had brought for me before. But when I got a fever yesterday, I realized how important a thermos can be. I lamented this on Twitter. But I never imagined that a goodhearted person would bring me one today. How quick! Inside the packaging for this vacuum-seal thermos, there was a note. It read:

I heard about your unfortunate situation from my colleague’s blog. Your spirit has moved me. My colleague is the flight attendant from Shanghai that you mentioned on Twitter. She told me that you were in need of a thermos. I figured that we are in a position to give you assistance faster than anyone else can, so I brought you this thermos today. The weather’s getting cold. I hope you are able to protect your stomach, and eat more hot food. If you need anything, you can let us know on Twitter. More and more Shanghai flight attendants will be joining our ranks to help you.

Hope you can return home soon. Keep up the fight.

I usually don’t actively try to tell people about my situation. I just sit here quietly. These past few days, the number of people who have come over to greet me has clearly increased. Flight attendants from airliners all over the world have heard about me through the newspapers and on television in their home countries. Some Chinese travellers have also heard about me from the Internet, and even ask for copies of “I Want To Go Home.”

At 7:00 p.m., a young Shanghainese woman flew in from Beijing. She was the editor of a beauty magazine, on a business trip to Japan. She said, “As I was getting of the plane, I thought to myself, ‘Surely he’s gone home by now,’ because I heard not long ago that you were being allowed to return. How are you still here?!” I spoke with her for awhile. She said, “I don’t understand politics, and I don’t understand what is going on here, but not letting someone return to his own country—that’s just not right. What are these government leaders doing, making it so difficult for you to just simply go home, refusing you eight times. Outrageous! I don’t know what to say. I hope you take care of yourself, and I wish you a swift return.” I thanked her for her concern.

I sent “December 6 Official Japanese Document, Forwarded To The Chinese Government By Feng Zhenghu (No. 4)” to the online media, along with an attached picture of the original document.