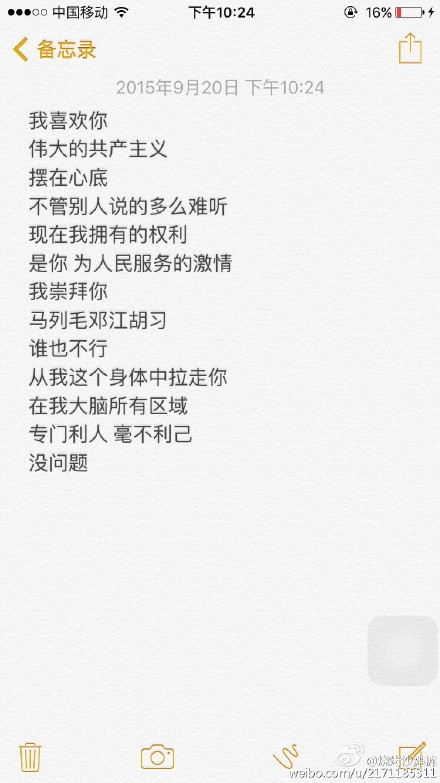 To act in the interest of the Chinese Communist Party, implying unethical, selfish behavior. Play on the idiom “give free rein to one’s animal nature” (shòuxìng dàfā 兽性大发).

The Party nature of a government official is said to be expressed through forced demolition and other public cruelties. Anyone can express their Party nature by writing paeans to the CCP or breaking into revolutionary song:

GaojiapingRenpoqie (@高家坪仁波切): While I was walking down the street I gave free rein to my Party nature and wrote this song, and now I can’t stop singing it. How do I stop? Oh, great CCP
How I like thee
You’ll stay in my heart
No matter what they say
All the rights I enjoy
Are because you serve the people
I worship thee
Marx, Lenin, Mao, Deng, Jiang, Hu, and Xi
No one else will do
You’re in my body
You’re in my brain
I’ll never be selfish again
no way (September 20, 2015) [Chinese]

Xilanxiaojing (@夕蓝小铮): Who knows if that Party-natured Ph.D. boy upstairs is going to sing “The East is Red” and “Nanniwan” tonight…

The thing is, he sings out of tune

Tags :CCP,word of the week