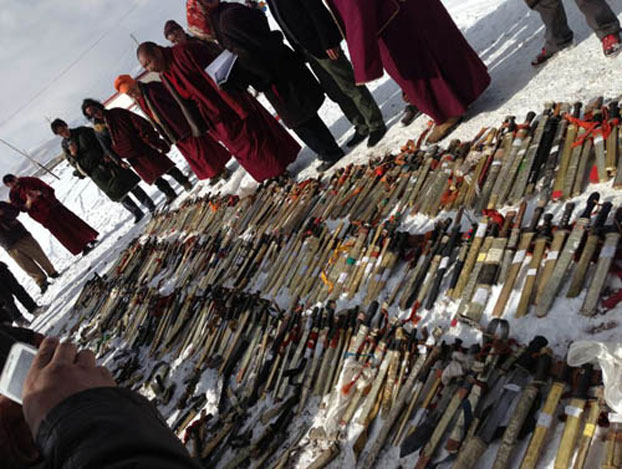 The New York Times’ Edward Wong reports on the erosion of Tibetan language by official policy on one hand and economic pressures on the other:

“This directly harms the culture of Tibetans,” said Mr. Tashi, 30, a shopkeeper who is trying to file a lawsuit to compel the authorities to provide more Tibetan education. “Our people’s culture is fading and being wiped out.”

China has sharply scaled back, and restricted, the teaching of languages spoken by ethnic minorities in its vast western regions in recent years, promoting instruction in Chinese instead as part of a broad push to encourage the assimilation of Tibetans, Uighurs and other ethnic minorities into the dominant ethnic Han culture.

[…] In March 2012, a student in Gansu, Tsering Kyi, 20, set fire to herself and died after her high school changed its main language to Chinese, her relatives said. She is one of more than 140 Tibetans who since 2009 have self-immolated in political protest.

[…] But Tibetan attitudes are complicated by the practical reality of living in a country where the Chinese language is dominant, and where parents and children sometimes prefer English as a second language of education, not a minority language. Some Tibetan parents worry that their native language and culture are dying but nevertheless tell their children to prioritize Chinese studies, in part because the national university entrance exam is administered only in Chinese. [Source]

An accompanying video by Jonah Kessel records Tashi Wangchuk’s attempted legal challenge, and his fear that the goal of what “looks like development or help on the surface […] is to eliminate our culture.”

Lack of proficiency in Mandarin can indeed place young Tibetans and members of other ethnic minorities at an economic disadvantage, though discrimination on the part of employers also plays a part. Read more on language and educational policies in Tibetan areas from Beijing-based writer Woeser and Columbia University’s Robert Barnett—both quoted in Wong’s article—via CDT. Tibetan at least has something of a lifeboat among its diasporic communities: the survival of many other minority languages is even more precarious.

The central government has stiffened its resolve to decide on the reincarnation of “living Buddhas, so as to ensure victory [in] the anti-separatist struggle”, Zhu Weiqun, chairman of the ethnic and religious affairs committee of the top advisory body to China’s parliament, wrote in the state-run Global Times.

[…] China says the tradition must continue and it must approve the next Dalai Lama. However, the Dalai Lama has said he thinks the title could end when he dies.

[…] In a commentary, Zhu said the issue “has never been purely a religious matter or to do with the Dalai Lama’s individual rights; it is first and foremost an important political matter in Tibet and an important manifestation of the Chinese central government’s sovereignty over Tibet”. [Source]

Guard posts erected among shops and in courtyards around the Jokhang Temple in Lhasa watch the comings and goings of residents. The posts are manned by locals who are selected by the residents’ management committee, though some appeared to be unstaffed. At night, the doors to the courtyards are locked, residents say.

[…] “This is a Chinese specialty, where the masses participate in managing and controlling society and they also enjoy the results of managing their society,” said Qi Zhala, the top Communist Party official in Lhasa.

Earlier this month, Reuters reporters, along with a small group of journalists, were granted a rare visit to the region on a highly choreographed official tour. Chinese authorities restrict access for foreign journalists to Tibet, making independent assessments of the situation difficult. [Source]

Read more on the Dalai Lama reincarnation dispute and “grid” surveillance in Tibet via CDT.