Dahlin: “I Hurt the Feelings of the Chinese People” 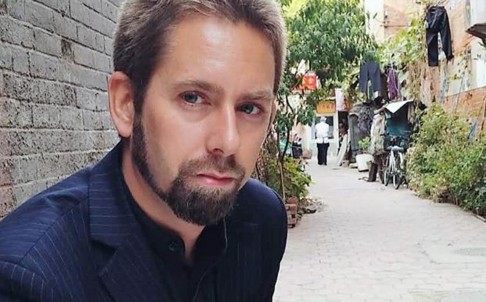 Beijing-based Swedish legal reform activist Peter Dahlin, who was detained January 4 on suspicion of endangering national security, has been shown on CCTV confessing to his alleged crimes, saying that he “hurt the feelings of the Chinese people.” Edward Wong at the New York Times covers the Xinhua report of the confession:

The Xinhua article reiterated that accusation [of endangering national security], but went into more detail.

It said Mr. Dahlin admitted to writing reports without “real or full facts.” It also said that the lawyer and activists trained by the group “got involved in hot-topic issues and sensitive cases, and intentionally escalated conflicts and disputes that were originally not severe.”

“It instigated the people to confront the government and produce mass incidents,” the article said.

The official report also accused Mr. Dahlin of taking almost half of about $1.6 million of financial support the group had received from outside sources in recent years.

Mr. Caster, a spokesman for Mr. Dahlin’s group, released a statement on Wednesday morning condemning Xinhua for publishing an “apparent forced confession.” It said the accusations against Mr. Dahlin were “baseless.” [Source]

Reuters also reports on the confession and additional accusations included in Xinhua’s coverage:

Xinhua said Dahlin had confessed that all of the reports on China’s human rights were “compiled via online research and could not reflect reality”.

“Not seeing some cases myself, I cannot guarantee they are true,” the report quoted him as saying.

State television broadcast footage of a casually dressed Dahlin confessing, although it was not possible to verify if he was speaking of his own free will. [Source]

According to their Twitter profile, Chinese Urgent Action Working Group (aka China Action), the group founded by Dahlin, “assists rights defenders in need, undertakes public interest litigation, and trains lawyers, to further human rights.” Colleagues of Dahlin’s denied the accusations against him and said the confession appeared to be coerced, according to a report by Tom Phillips of The Guardian:

Speaking on Wednesday, Michael Caster, who worked alongside Dahlin at CUAWG, told the Guardian his friend and colleague appeared to have been coerced into making parts of the statement.

“The lines about being sorry for causing harm to the Chinese government or Chinese state are clearly scripted. There was really never a point that he considered what he was doing to be harmful to the Chinese state or the Chinese society,” he said, noting that the Swedish activist appeared “strained” in the television “confession”.

Caster said it was true that Dahlin and CUAWG had been attempting to help Chinese civil society by offering training and support to human rights lawyers who were trying to provide justice to China’s disenfranchised and downtrodden.

However, he rejected the suggestion that Dahlin had been doing so for any “nefarious or malicious” purpose or for personal gain. [Source]

Dahlin’s is the latest in a string of televised confessions from lawyers, journalists, and others, many of whom publicly admitted to their alleged crimes before they had been formally charged or met with a lawyer. Observers provided some explanations of why detainees may make public confessions:

4 any1 thking abt Peter Dahlin, rem this from Peter Humphrey: "My health was held hostage" for a forced confession. https://t.co/zxkSMa4nTJ

Dahlin suffers from Addison’s disease, which requires daily medication. Dahlin’s Chinese girlfriend, Pan Jinling, is also missing and believed to have been detained.

Dahlin’s detention appears to be linked to the arrests of lawyers at Beijing’s Fengrui Law Firm, several of whom have been charged with “subversion,” “inciting subversion,” and other charges after a widespread crackdown this past summer in which hundreds of lawyers and activists were detained or questioned. After the initial charges were announced, propaganda authorities issued a directive banning independent reporting or commenting on the cases. As Chinese Human Rights Defenders reports, 15 of those detained in July have now been formally arrested. Verna Yu at the South China Morning Post explains government accusations linking Peter Dahlin to lawyers from Fengrui, including Wang Quanzhuang, who has been charged with subversion:

The group, which Xinhua said was not registered on the mainland, had funded activist Xing Qingxian to “collude with overseas [forces]” to smuggle detained rights lawyer Wang Yu’s son, 16, abroad. The attempt in October failed and the boy and those who helped him were repatriated to the mainland from Myanmar. [Source]

Wang Yu’s son, Bao Zhuoxuan, was detained from a guest house in Myanmar in October, when he was attempting to travel to the U.S. after both his lawyer parents were taken away by public security. The most recent reports say he is being held under house arrest at his grandparents’ home outside Beijing.

A group of international lawyers and judges wrote an open letter in The Guardian calling on President Xi Jinping to release the detained lawyers and end intimidation against them and their families.

In the wake of the ongoing crackdown on lawyers, China law expert Jerome Cohen recounts a conversation he had with rights lawyers in China, including many of those who have since been detained, about the best way to carry out their work in China: working within the system or fighting against it. He writes in the Wall Street Journal:

China’s public lawyers still face the same dilemma today. Though Chinese leadership has preferred lawyers to be merely technical practitioners, public lawyers are more than that. They guide society by articulating its goals, shaping its rules, institutions and procedures, and providing the personnel required to operate the evolving political-legal system. Some serve in government as legislators, administrators, prosecutors and judges. Others challenge the government as independent practitioners who safeguard society’s interests. The latter group is the most embattled of the legal profession.

Public-law practitioners have benefited societies transitioning from dictatorship to democracy. This is dangerous work because of official repression and the violent responses of reactionary groups, and it is seldom lucrative. Yet a minority of the legal profession in many countries has courageously struggled for peaceful change by working within the existing imperfect, authoritarian legal system.

[…] It is against this background that I view the contemporary Chinese government’s repression and restriction of public lawyers. The lack of transparency in China obscures whether the ranks of these groups are growing, as some claim, despite or perhaps because of the restrictions. But it does appear that this repression is likely to endure for the remainder of Mr. Xi’s rule. [Source]

As part of the broader “repression and restriction,” the National People’s Congress is preparing to pass an international NGO law, which would tighten the restrictions on all civil society groups working in China, such as Dahlin’s China Action group. From Emily Rauhala at the Washington Post:

Though many countries have NGO laws, China’s draft law has been widely criticized for treating non-profits as threats to Party rule instead of partners in development. Many fear it will be used to silence critics.

“The draft Foreign NGO Management Law seems to be based on the assumption that civil society organizations are serious threats to national security, and unfortunately, this sort of logic seems to be at play in this case as well,” said William Nee, a Hong Kong based researcher for Amnesty International.

[…] “You look at the draft NGO law and there’s definitely a concern that the Chinese government is probably looking to send a signal with Peter’s detention,” said Caster.

“The message could be: ‘See, we were right with the law we were working on.’” [Source]