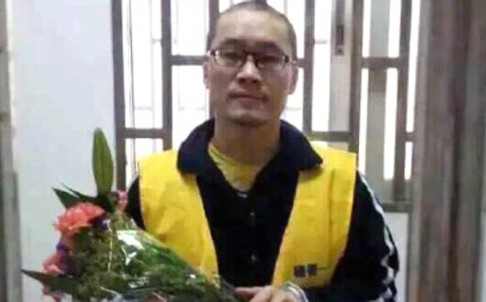 […] The Guangzhou trio distributed books about non-violent resistance and “wilfully incited the subversion of state power and the overthrow of the socialist system”, police said.

They added in a statement to prosecutors, posted online by the activists’ lawyers, that they had rented an office to study, print, and mail several books including one titled On Strategic Non-violent Conflict: Thinking about the Fundamentals.

They were also accused of disseminating “From Dictatorship to Democracy” by Gene Sharp, an expert on non-violent social movements.

The books “have been confirmed to have serious political transgressions”, police added. [Source]

Yuan’s lawyer Hu Xinfan told The New York Times that Tang had denounced the court as “a tool of political persecution” and refused to endorse its legitimacy by appealing the verdict. The other two are undecided. The 20 months they have already spent in detention will be counted towards their sentences, Hu said.

The three were among dozens detained in May 2014 as authorities sought to stifle commemoration of the 25th anniversary of the June 4th crackdown. That September, the U.N. Human Rights Council’s Working Group on Arbitrary Detention called for their immediate release. Their lawyers were reportedly attacked and surveilled before their first trial last June, and then dismissed by the defendants in a move often employed to protest procedural violations.

By the time the trial resumed the following month, Wang’s lawyer Sui Muqing had himself been swept up in the “Black Friday” crackdown on rights attorneys and activists. He was “released on bail” earlier this month, but others have been charged with crimes including subversion of state power. Human Rights Watch’s Sophie Richardson described Tang and the others’ sentences as a bad omen for these cases:

“The Chinese government needs to stop equating peaceful criticism with subversion if it is to make any progress towards respecting rights,” said Sophie Richardson, China director. “The prosecution of three rights activists on such dubious charges shows how far Beijing needs to go.”

[…] The case has been marred by multiple procedural violations and all three have been allegedly mistreated while in detention. According to Wang Qingying’s lawyer, Wang has been repeatedly beaten by fellow detainees and guards, forced to wear handcuffs and leg irons for 15 days, and subjected to forced labor every day. The authorities have also refused one of the lawyers’ requests to copy case material and denied the defendants’ right to communicate with their families. Tang Jingling was unable to meet with one of his lawyers for at least two months after he was taken into custody. The lawyers for all three have repeatedly been denied regular access to their clients. None were given adequate medical treatment when they were ill, nor allowed yard time for 15 months between May 2014 and September 2015 even though Detention Center Regulations require detainees be given time daily for outdoor activities.

[…] “The sentences for Tang, Yuan, and Wang don’t bode well for the more than a dozen human rights lawyers likely to stand trial soon for similar ‘subversion’ charges,” Richardson said. “The authorities should step in and end these prosecutions now.” [Source]

Amnesty International’s Patrick Poon similarly described the verdicts as “a gross injustice,” and accused the government of “arbitrarily silencing government critics” under the guise of defending state security.

Meanwhile, the campaign against civil society continues with the closure of a prominent women’s legal aid center in Beijing. The news comes amid growing pressure on NGOs, and follows the deportation of Peter Dahlin, the founder of another legal aid organization in the capital. From The New York Times’ Didi Kirsten Tatlow:

As word spread of the closing of the Beijing Zhongze Women’s Legal Counseling and Service Center, many women’s rights advocates expressed shock. The center was highly symbolic for having been born of the United Nations Fourth World Conference on Women in Beijing in 1995, a moment when China, struggling to be accepted internationally after the 1989 military suppression of pro-democracy demonstrations at Tiananmen Square, loosened controls on civil society activities.

[…] “It looks like they are trying to crush all people with any influence,” said a longtime women’s rights campaigner who requested anonymity while discussing a politically sensitive matter. “As far as well-known people go today, it’s ‘kill one and scare 100’ to make sure no one else tries to do anything. Controls on thought and speech are intensifying. The repression of lawyers and NGOs is growing.”

[…] The closing of the center signifies a tightening of the restrictions on civil society because its work helping women in domestic violence, child custody, land rights and employment disputes had long been tolerated by the government, said Maya Wang, a researcher on China with the advocacy group Human Rights Watch in Hong Kong.

[…] “The Chinese government is increasingly hostile of civil society actors who are doing work that was tolerated in the past,” especially groups with links to international organizations, she said. [Source]