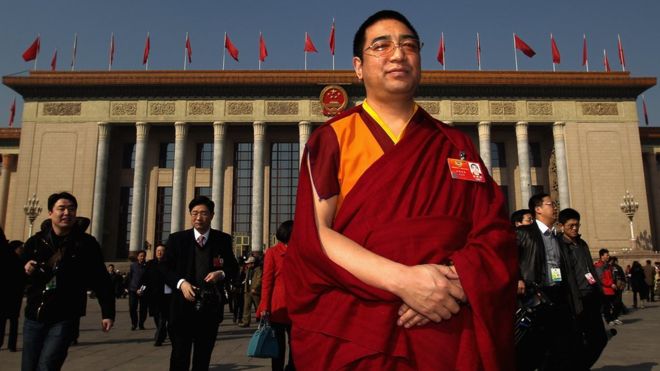 Human Rights Watch reports that authorities in Tibet are extending a village-based surveillance scheme that was originally scheduled to end in 2014, creating a permanent system of cadre teams to maintain political stability in the region:

“The Chinese government’s decision to extend its Tibet surveillance program indefinitely is nothing less than a continuous human rights violation,” said Sophie Richardson, China director. “The new normal is one of permanent surveillance of Tibetans.”

[…] The purpose of the village-based cadre teams was initially described as improving services and material conditions in the villages, but, according to the Party leader of the TAR in 2011, their primary requirement was to turn each village into “a fortress” in “the struggle against separatism,” a reference to support for Tibetan independence and the Dalai Lama. This was done by setting up new Communist Party organizations in each village, establishing local security schemes, gathering information about villagers, and other measures. The teams were also required to carry out re-education with villagers on “Feeling the Party’s kindness” and other topics.

[…] The village-based teams also “screen and mediate social disputes,” which involves acting to settle and contain any disputes among villagers or families, because of official concerns in China that small disputes might lead to wider unrest or “instability.” One objective is to prevent villagers from presenting petitions to higher level officials.

[…] In August 2015, a statement posted on a government Tibetan-language website said that the TAR authorities had called for work teams “to be constantly stationed at their village committees.” It added that “on hearing that village-based-cadre work was to continue, the rural masses were overjoyed, saying that this was one of the Party and government’s best policies to benefit rural areas.” [Source]

Read HRW’s 2013 report on the surveillance grid in Tibet, the reported use of monks’ cellphones as monitoring devices, and more on surveillance in the region, via CDT.

Meanwhile, the BBC reports that the Chinese State Administration for Religious Affairs has established the country’s first database of “authentic living buddhas,” complete with photos, personal details, and license numbers, that has been made available to the public for verification purposes.

Beijing has taken the unusual step of concerning itself with matters of reincarnation by releasing the names, photographs and locations of 870 “verified” buddhas on the website of the State Administration for Religious Affairs, Xinhua news agency reports. It’s a move that’s been praised by one of the men who features on the list. “As a living buddha, I feel genuinely happy about it,” Drukhang Thubten Khedrup tells the state-run news agency.

According to China’s religious affairs agency, the system has been inaugurated to counter “fake” buddhas who are undermining Tibetan Buddhism by cheating believers out of cash.

However, the spiritual cataloguing scheme has already been criticised as a means of further controlling Tibetan affairs. “This living Buddha database and the whole policy toward reincarnation is clearly a pre-emptive move by the government to control what happens after this Dalai Lama,” Amnesty International’s Nicholas Bequelin told Time magazine in December 2015, when the list was first announced. It’s also seen as a means of confirming state choices for other religious appointments. [Source]

At China Real Time, Olivia Geng and Josh Chin note that fake living buddhas were described as a national security threat on state broadcaster CCTV last year. They also point out that the Dalai Lama is not among those on the new register, despite Beijing’s repeated insistence that he must reincarnate, and that it has the right to identify his reincarnation.

Elsewhere, Jane Qiu looks at the negative impacts that a series of government grazing restrictions and fencing policies have had on the Tibetan grasslands and the health of the surrounding environment. From Nature:

The challenges that face Dodra and other Tibetan herders are at odds with glowing reports from Chinese state media about the health of Tibetan grasslands — an area of 1.5 million square kilometres — and the experiences of the millions of nomads there. Since the 1990s, the government has carried out a series of policies that moved once-mobile herders into settlements and sharply limited livestock grazing. According to the official account, these policies have helped to restore the grasslands and to improve standards of living for the nomads.

But many researchers argue that available evidence shows the opposite: that the policies are harming the environment and the herders. “Tibetan grasslands are far from safe,” says Wang Shiping, an ecologist at the Chinese Academy of Sciences’ (CAS) Institute of Tibetan Plateau Research (ITPR) in Beijing. “A big part of the problem is that the policies are not guided by science, and fail to take account of climate change and regional variations.”

The implications of that argument stretch far beyond the Tibetan Plateau, which spans 2.5 million square kilometres — an area bigger than Greenland — and is mostly controlled by China. The grasslands, which make up nearly two-thirds of the plateau, store water that feeds into Asia’s largest rivers. Those same pastures also serve as a gigantic reservoir of carbon, some of which could escape into the atmosphere if current trends continue. Degradation of the grasslands “will exacerbate global warming, threaten water resources for over 1.4 billion people and affect Asian monsoons”, says David Molden, director general of the International Centre for Integrated Mountain Development (ICIMOD) in Kathmandu, Nepal. [Source]

Read more on threats to grasslands in Tibet and elsewhere, including a 2013 HRW report on the forced settlement of Tibetan herders, via CDT.