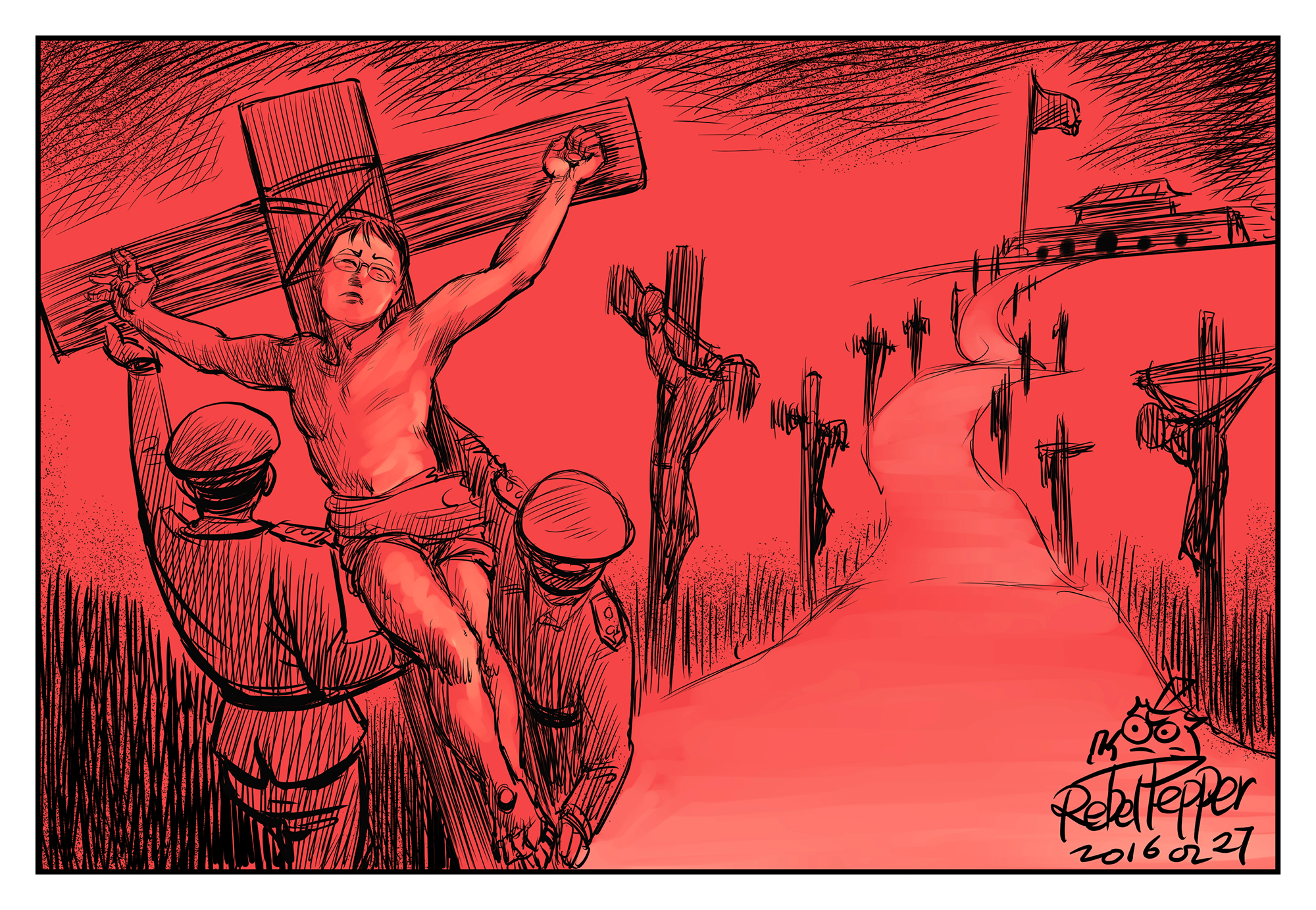 Cartoonist Rebel Pepper comments on the recent televised confession by lawyer Zhang Kai, who had worked with Christians in Wenzhou, Zhejiang to fight the government removal of crosses there.

Zhang Kai on the Cross, by Rebel Pepper: 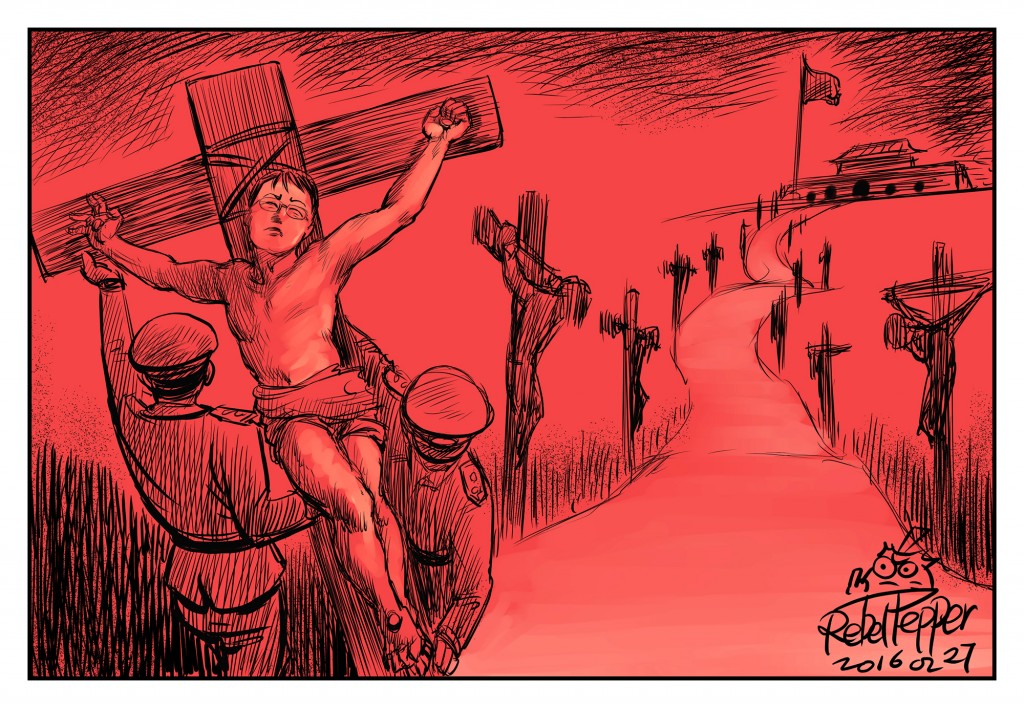 Beijing-based Zhang Kai was detained in August while in Wenzhou after he provided legal support to churches that were fighting demolition of their crosses and in some cases of the churches themselves. Since 2013, more than 1,200 crosses have been demolished in what the government calls a “beautification campaign” but what activists say is another effort to restrain the spread of Christianity. From Tom Phillips at The Guardian:

Zhang Kai, 36, was seized by security forces in August 2015 just hours before a planned meeting with the US ambassador-at-large for religious freedom at which he had intended to denounce a government crackdown on churches in Zhejiang province.

Activists believe the decision to arrest the Bible-carrying attorney was designed to silence Zhang’s outspoken criticism of what they have dubbed China’s “anti-cross” campaign. Church groups say the campaign has affected more than 1,200 places of worship since it began in 2013.

Zhang had not been seen since his detention on 25 August but on Thursday evening he appeared in a televised “confession” broadcast by the state-controlled channel Wenzhou TV. [Source]

On a news programme on state-controlled Wenzhou TV on Thursday night, Zhang confessed to encouraging Christians to come together to “protect their rights” after the authorities removed crosses from churches.

“I really regret doing these things, I feel very remorseful,” Zhang said. “These things violated China’s law and violated my personal integrity as a lawyer, and they harmed societal structure and national security.”

[…] “I also warn those so-called human rights lawyers to take me as a warning and not collude with foreigners, take money from foreign organisations or be engaged in activities that break the law or harm national security and interests,” he continued, according to the report. [Source]

Zhang’s detention comes amid a prolonged clampdown on civil society which in the past six months has especially targeted human rights lawyers and activists; several hundred have been detained, questioned, and in some cases charged since last summer. Public televised confessions, often before the accused is tried or even charged, have become increasingly common in recent months.

Other members of the Christian church and clergy in Zhejiang have also been caught up in the crackdown that targeted Zhang Kai. Bao Guohua, a pastor who was working with Zhang to protest the cross demolitions, was sentenced to 14 years in prison this week, while his wife, Xing Wenxiang, was sentenced to twelve on charges of “corruption, financial crimes and gathering people to disturb social order.” Edward Wong at The New York Times reports:

The sentences for the pastor, Bao Guohua, and his wife, Xing Wenxiang, were among the harshest imposed recently on clergy members and their associates in China. The newspaper reported that a court had sentenced an additional 10 people who were members of Mr. Bao’s church or a Christian group in the same city, Jinhua, in Zhejiang Province, but it did not give details of those sentences.

[…] Mr. Bao had official approval to lead a congregation, and he oversaw a government-sanctioned church. Zheng Leguo, a house church preacher now living in the United States, said in an interview on Friday that he believed that Mr. Bao, who has been in detention since at least August, was being persecuted because he had tried to defend his church against an order to take down its cross. Few other government-approved pastors in Jinhua have opposed the campaign of cross removals. [Source]