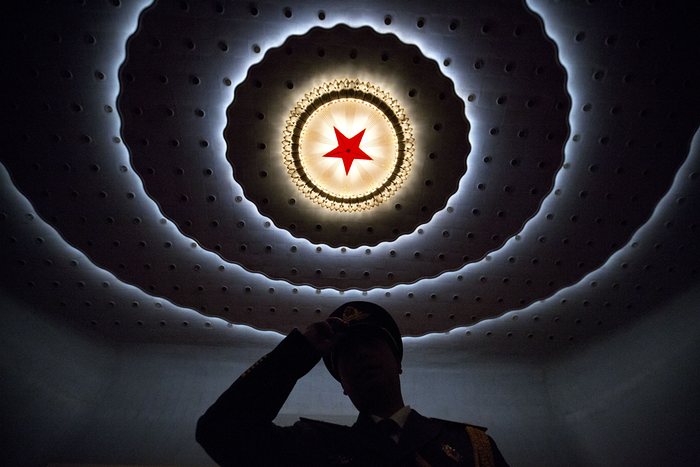 Chinese lawmakers have unanimously approved the government’s 13th Five-Year Plan at the closing meeting of this year’s National People’s Congress (NPC) session, during which Premier Li Keqiang gave reassurances on the health of China’s economy. The BBC reports:

The National People’s Congress ended with the adoption of a new five-year plan for the economy, aiming for 6.5-7% growth a year by 2020.

[…] The plan, laid out by Communist Party leaders, received unanimous approval from delegates at the largely rubber-stamp NPC.

At his annual press conference later, Mr Li stressed the importance of reforms to economic vitality.

He acknowledged there would be job losses as reforms were made to state-owned enterprises, particularly in the steel and coal industries, but said there would be no mass redundancies. [Source]

At South China Morning Post, Cary Huang looks at some of the pressing issues that were not addressed at Premier Li’s NPC press conference, including state enterprise reform, the property market, and the country’s role in the South China Sea.

Premier Li highlighted the importance of reducing financial risks in the economy while answering his first question at the briefing and elaborated on economic development, but did not directly mention this major issue concerning the mainland public as property prices soar in the country’s biggest cities.

Li answered questions about economic reform and highlighted the importance of revitalising the economy through streamlining bureaucracy and reducing taxes, but the elephant in the room – how to reform China’s ailing state enterprises – was not mentioned.

While Li answered questions on China’s ties with the United States, Russia, South Korea and Japan, plus gave an overview on the nation’s stance on regional relations in Asia, the premier did not mention ties with Europe and Africa. He also did not specifically address rising tensions over China’s increasingly assertive territorial claims in the South China Sea. [Source]

In addition to the premier’s silence on these topics, The New York Times’ Didi Kirsten Tatlow reports that delegates at the session were generally reluctant to speak to the media. At NPR, Anthony Kuhn discusses the associated absence of freedom of speech at the two sessions and the delegates’ lack of real power in the political process:

China’s constitution makes the NPC the highest organ of state power. But critics say that the legislators are unable to exercise all this power and merely ratify decisions that the leadership has already made.

[…] At this year’s legislative session, there was some informal debate about whether legislators have enough freedom of speech to do their jobs.

Ge Jianxiong, a history professor at Shanghai’s Fudan University and a CPPCC delegate, warns foreigners not to confuse China’s legislature with Western-style parliaments.

“This is China,” he says. “The Communist Party’s ruling status is absolute, and it leads the government. Under these circumstances, if we want to make a contribution to our country, this channel is worth using. That’s all we can do.”

Ge admits that he often offers the leadership his advice not at the Great Hall of the People, but through confidential channels.

He says this is partly to make it more likely that his suggestions will be acted upon — and partly because, sometimes, he just isn’t sure where the boundaries of acceptable discussion lie. [Source]

Earlier this week, several lawyers who challenged aspects of the nation’s criminal justice practice, including televised confessions and the use of torture, had their reform proposals rebutted at the National People’s Congress. The meetings, coming amid the Xi administration’s demonstrated intolerance of alternative viewpoints expressed by Party members and the media, convened in a noted atmosphere of tension.

Meanwhile, Coco Feng reports that green energy will become a top government priority as a result of the attention given to environmental issues at the Two Sessions. From Forbes:

Because of severe air pollution in recent years, China’s ruling elite are determined to promote new energy, coal reform, and to implement environmental protection legislation to tackle the problem during the “Two Sessions”.

And insiders said that green economy would be a main focus in China, both politically and economically.

[…] The government plans to get rid of up to 3.8 million old cars that have low energy efficiency, develop new energy vehicles (NEVs) and build more electric vehicle charging stations.

[…] Besides NEVs, coal reform has also been mentioned repeatedly during the “Two Sessions”. The central government also announced last month a target to eliminate production capacity of 500 million metric tons of coal by 2020. The government is keen to promote and subsidize clean energy, including natural gas, wind, and solar power. [Source]

At The Guardian, Natasha Rees-Bloor presents a series of photos highlighting the Chinese People’s Political Consultative Conference. Several Tibetan delegates were spotted wearing badges featuring President Xi Jinping, allegedly as a “spontaneous act to show gratitude to the leadership,” at the start of the conference earlier this month.