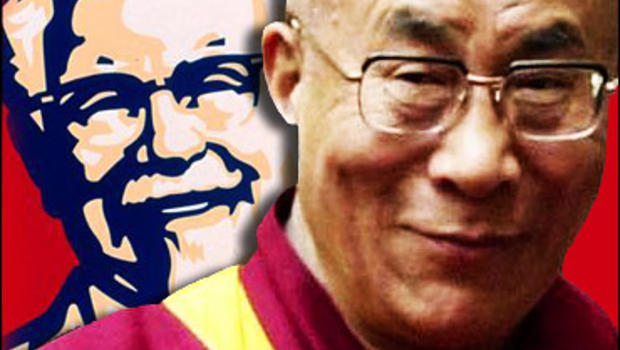 The International Campaign for Tibet said it was asking Yum how it was complying with the US Tibet Policy Act, which requires investments to protect Tibetan culture and livelihoods, and its own pledges of corporate social responsibility.

“It is hard to see how they will be able to implement those principles given the political climate in Lhasa today,” said its president Matteo Macacci.

[…] Images of the interior posted online showed a large image of the Potala Palace, the historic residence of the Dalai Lamas, and triangle motifs labelled with Tibetan mountain names in English, including Qomolangma, the local name for Everest.

Such design elements “may play well with Chinese and foreign tourists who want a little fast culture with their fast food but the onus is on Yum to show that its commitment to the community is not tokenistic and superficial”, said Currie of Free Tibet. [Source]

The company’s abandonment of a planned Lhasa KFC in 2004 reportedly drew applause from the Dalai Lama, who had sent a letter to Yum’s CEO citing the chain’s incompatibility with the Buddhist-inspired Tibetan diet and his own aversion to corporate chicken farming.

There’s nothing in principle wrong with a Western company setting up shop in Tibet but it’s always a source of concern because so far, very few companies have shown that the have any interest in bringing benefit to Tibet and Tibetans. Tibet is an occupied country and Tibetans have been squeezed out of business and economic development by Han Chinese immigration and China’s imposition of Mandarin as the language of education, business and government.

Tibetan interests aren’t represented by local authorities who serve Beijing rather than Lhasa and Yum! needs to show that it understands that. That means, for instance, that it ensures Tibetans are hired, trained and promoted fairly and that the Tibetan language is used in its restaurant. If Yum! treats Lhasa as just another Chinese city with its eye on the Chinese and foreign tourist market, it is playing into the hands of China’s government. The ‘local design elements’ apparently included in the store may play well with Chinese and foreign tourists who want a little fast culture with their fast food but the onus is on Yum! to show that its commitment to the community is not tokenistic and superficial. They haven’t done that yet. [Source]