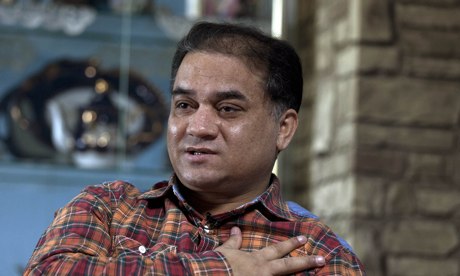 Uyghur scholar Ilham Tohti was detained under accusations of separatism in January 2014, and formally charged that July. The scholar and activist, known as a moderate voice calling for dialogue between Uyghurs and Han in the troubled Xinjiang region, was handed a life sentence in September 2014 and saw all of his assets confiscated by the state. Commentators noted that his moderation may have been what made him a target: “They don’t want moderate Uyghurs,” scholar Wang Lixiong said, “Because if you have moderate Uyghurs, why aren’t you talking to them?” Following the harsh sentence, others warned that it could fuel more radicalism in Xinjiang, where a heavy-handed crackdown on terrorism in effect since May 2014 is seen by critics as a major force exacerbating tensions in the region.

Ilham Tohti has now been nominated for a prominent human rights award, a move expected to elicit protest from Beijing. At The New York Times, Nick Cumming-Bruce reports:

The scholar, Ilham Tohti, was chosen by the Martin Ennals Foundation, based in Switzerland, as one of three candidates for its annual prize recognizing the work of human rights defenders. The group, which is named after the founder of Amnesty International, said in its citation that Mr. Tohti [sic, possibly], an economist, “has worked tirelessly to foster dialogue and understanding” between China’s Uighur minority and the country’s dominant ethnic group, the Han, “despite an environment of religious, cultural and political repression suffered by Uighurs.”

The decision was all but certain to anger Beijing. In 2014, after the Ennals Foundation nominated another Chinese dissident, Cao Shunli, for the prize, Chinese officials lobbied the Swiss federal authorities and the foundation’s donors and partners to deny her the award, according to the foundation. Ms. Cao died in detention before a winner was chosen.

[…] Mr. Tohti, a professor at Minzu University in Beijing, was a blunt critic of China’s policies encouraging Han settlement in the Xinjiang region, in China’s far west, and he called for Uighurs there to have access to the same economic benefits as Han and to be allowed to preserve their Turkic culture. At the same time, human rights groups say, he argued against separatism and expressed concern about growing militancy among Uighurs in the region. Mr. Tohti was repeatedly placed under house arrest, and in 2013, he was prevented from leaving China to take up a post as a visiting scholar at Indiana University.

[…] “By giving him life they were sending an extreme message that there is simply no room, even through peaceful means, to criticize state policies in Xinjiang,” Sophie Richardson, the China director at Human Rights Watch, said by telephone. “We see his work as part of the solution to the situation in Xinjiang, not as part of the problem.” [Source]

At Radio Free Asia, Qiao Long reports on the heavy economic and social toll Ilham Tohti’s imprisonment and asset seizure has had on his family:

Guzelnur has been left with scant income to care for the couple’s young sons in Beijing while her husband serves a life sentence for “separatism,” she said.

“Sometimes I get financial help from friends or relatives, but they’ve got their own kids too, and their own expenses to meet,” she said in an interview on Tuesday.

[…] Guzelnur said she has also asked Tibetan poet and writer Woeser for help when things get tough.

[…] She said she is unable to take time out from her children’s routine to visit her husband, who is serving his time in the remote northwestern Xinjiang region in spite of having made a life in Beijing.

[…] Beijing-based rights activist and family friend Hu Jia said Guzelnur has also become socially isolated since Tohti’s incarceration, as many of the couple’s former friends have withdrawn contact for fear of political reprisals.

[…] “The Uyghurs who live here don’t dare have anything to do with them because they are afraid, and they are in economic hardship too,” he said. [Source]

Ilham Tohti won the 2014 PEN/Barbara Goldsmith Freedom to Write award shortly after his 2014 detention, and his daughter accepted it on his behalf. For more on Ilham Tohti’s activism, the Chinese-language UighurBiz website advocating for “peaceful, rational, reasonable” debate between Uyghurs and Han that he founded, and his pre-detention personal interviews, see a film compiled by China Change last year. Also see prior coverage of Ilham Tohti, via CDT.

As Ilham Tohti has become a casualty of Beijing’s war against terrorism, authorities have also been systematically harassing and gathering intelligence on overseas Uyghurs. Last month, after exiled Uyghur activist and executive chairman of the World Uyghur Congress Dolkun Isa was recognized by the U.S.-based Victims of Communism Memorial Foundation for his advocacy, Beijing quickly protested, labeling the Germany-based activist a “terrorist.” China had previously been criticized for issuing “red notices” to Interpol on Dolkun and other exiled activists.

Dolkun was recently granted an Indian tourist visa to attend a conference of Uyghurs, Taiwanese, and Tibetans on democracy in China, set to begin this week in Dharamsala; China reacted angrily, echoing their claims of Dolkun’s “terrorism.” This week, New Delhi revoked Dolkun’s visa. At The Indian Express, Shubhajit Roy and Sagnik Chowdhury report:

India’s move to grant the visa was seen as a retaliatory measure after China blocked the listing of Jaish-e-Muhammad chief Masood Azhar as an international terrorist at the UN.
While Isa was quick to claim that “Chinese pressure” appeared to be the “main reason” for India cancelling the visa, officials said that the issue fell between two stools, the Home Ministry and the Ministry for External Affairs

[…]While no threats were issued, the Chinese side hinted that Beijing may raise the issue of India allowing a “terrorist” to come and attend a conference, even as Indian officials make statements at the Heart of Asia conference on Afghanistan that “there are no good or bad terrorists”.

Officials also said India does not want to be seen as a country “harbouring” and giving “safe passage” to individuals who are considered “terrorists”. […] [Source]

An op-ed from The Hindu warns of the risks New Delhi faces with this diplomatic move, and a post from Phayul notes that following the pressure-induced cancelation of Dolkun Isa’s visa, the Dharamsala meeting will take place out of view of the media.