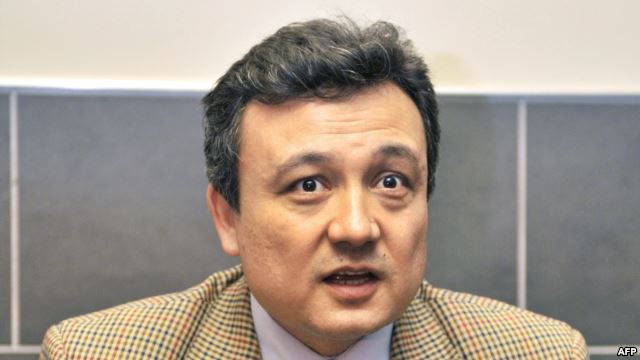 “The giving of this award by the relevant organization to a terrorist like Dolkun Isa who has carried out multiple crimes is to profane and sully human rights and the rule of law,” Hong told a daily news briefing.

The foundation said they gave him the award for leading “a movement of principled opposition to the ongoing persecution” of the Uighur people and for continuously seeking a peaceful solution with the Chinese government.

The World Uyghur Congress cited Isa as saying in his acceptance speech that he rejects violence and the Uighurs are a “people of peace and development”.

“These principles make the Uighur issue not a Uighur problem, but a Chinese government problem, a condition generated by systematic denial of fundamental human rights and freedoms,” he said. [Source]

Dolkun Isa fled China in 1997, and became a German citizen in 2006. He has been on Beijing’s list of wanted terrorists since 2003. He denies China’s claims that he is the vice chairman of the East Turkestan Liberation Organization. China has been criticized for issuing “red notices” to Interpol on Dolkun and other overseas dissidents. Earlier this year, Dolkun was barred from entering Taiwan to attend the Asia Pacific Religious Freedom Forum, presumably due to pressure from Beijing. Rights lawyer and activist Ni Yulan was reportedly prevented from traveling to the U.S.  this week to accept the Secretary of State’s International Women of Courage award.

An ongoing crackdown on terrorism focused on the Xinjiang region, which began in 2014, has seen the use of mass public sentencing rallies; tightened regional security measures; travel, cultural, and religious restrictions aimed at Uyghurs; and the harassment of overseas Uyghurs. The crackdown has also included softer tactics such as propaganda drives and the reinforcement of information controls concerning regional violence. While critics of the terror crackdown see restrictions on Uyghurs as more likely to exacerbate unrest than to curb violence, China consistently denies any official discrimination against Uyghurs.

“We must respect differences, and take a respectful attitude towards dealing with problems of (different) customs, to create an atmosphere in society of respect for the culture and customs of different peoples,” Zhang said, in comments carried in Thursday’s official Xinjiang Daily.

This can start from the smallest things in daily life, and people should be “guided” to live, work and study together so they can learn respect and tolerance, added Zhang, who is a member of the Han majority. [Source]