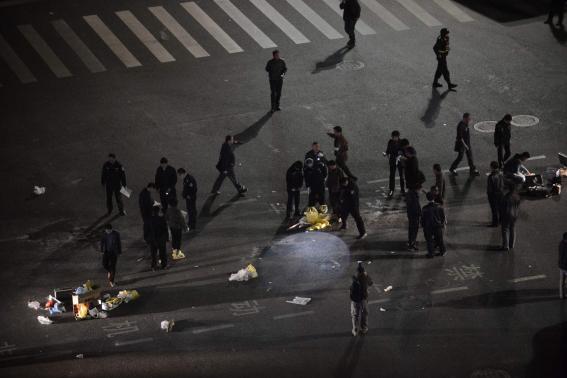 China has executed three men for their involvement in the violent knife attack that killed 28 and injured many more one year ago at the Kunming railway station. The names of the executed indicate that they are all Uyghurs. All three were found guilty of organizing and leading the attack, and earlier appeals against their death sentences were upheld by a Kunming court last October. Reuters’ Megha Rajagopalan reports:

The three men who were executed, Iskandar Ehet, Turgun Tohtunyaz and Hasayn Muhammad, were sentenced to death in September after being convicted of homicide and leading a terrorist organization, the Kunming Intermediate People’s Court said. A higher court later upheld the sentence, the official Xinhua news agency reported.

[…] Dilxat Raxit, a spokesman for the exiled World Uyghur Congress, said the defendants were denied a fair trial.

“China’s use of the death penalty as a political tool does not address the root of the problem,” he said in an e-mail to Reuters. “China continues to make use of this incident to incite discrimination against Uighurs.”

The Chinese government denies accusations of official discrimination against Uighurs, and says all trials are carried out fairly and in accordance with the rule of law. [Source]

After the Kunming attack and several other incidents of violence allegedly carried out by Uyghur separatists in Xinjiang and elsewhere in China, a nationwide crackdown on terrorism was launched last May. The crackdown, which was recently extended through the end of 2015, has so far seen increased security measures, restrictions on religious dress and custom, several public mass sentencing rallies, a near doubling of arrests in Xinjiang last year, and the controversial sentencing of Uyghur scholar Ilham Tohti—known by many as a voice of moderation—to life in prison

Recently, a circular urging ethnic Han residents (specifically) in Kashgar, Xinjiang to take “ten essential” safety measures circulated on the Internet. A draft counter terror law that attracted criticism from human rights organizations and foreign diplomats alike was stalled from passing at the recent National People’s Congress meetings as expected, but officials have announced that deliberation will move forward.