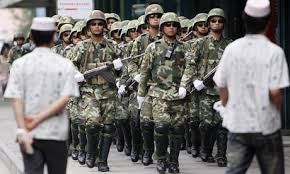 In response to escalating violence throughout China, authorities launched a nationwide crackdown on terrorism last May, and recently extended it through the end of 2015. Despite the campaign’s steady rollout of heightened security measures in Xinjiang and elsewhere in China, violence has continued—mostly in Xinjiang, but also in major cities outside of the autonomous region. Last week, human rights group Dui Hua Foundation analyzed official statistics showing that criminal trials in Xinjiang increased 40 percent last year compared with 2014, and warned of a “heightened suppression of human rights activism and dissent” in the region.

According to relevant documents and meetings and in order to ensure the safety of all Han residents, the Kargilik County [in Kashgar Prefecture] committee requests all residing in the vicinity of Kargilik County accomplish “Ten Essentials”:

Briefing on the conditions of hostile forces in society: On March 8, 2015, 22:12, Shache County Tuanjie Center Road, 7 knife-wielding hoodlums attacked a crowd without reason, killing 4 and injuring 7 (all [suspects] were shot dead). On March 12, 2015, 18:15, a gang of hoodlums attacked without reason a mahjong parlor on Kashgar City’s Second Ring Road and Yabi West Road injuring 8 (among which 3 were seriously injured).  4 of the hoodlums were shot dead at the scene and two more arrested. Currently, the situation of hostile forces in society is extremely complex. Please take note for your safety and that of your family members. In order to understand and protect the safety of your family, please quickly rectify and improve their safety awareness. 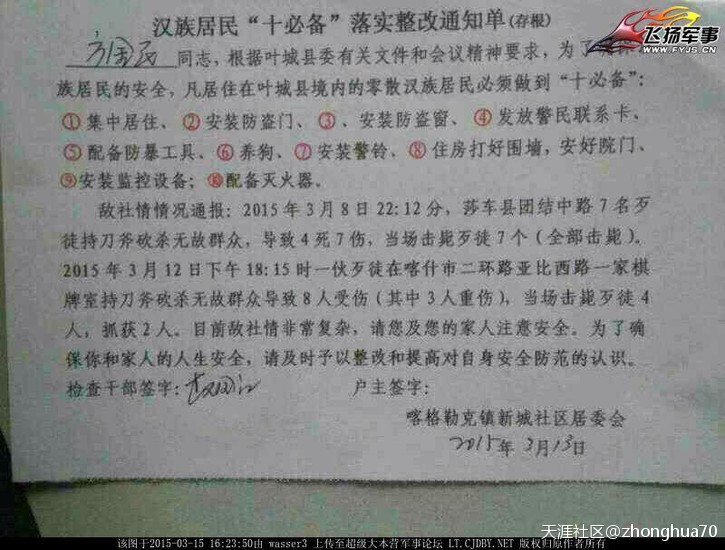 The two attacks referenced in the circular, which both went unreported in official media, occurred during China’s annual “Two Sessions” legislative meetings in Beijing—a time of heightened political sensitivity during which censors direct news to focus squarely on official policy. State media did report that Xinjiang Party chief Zhang Chunxian “confirmed for the first time” during the meetings that Xinjiang residents have illegally left China to join the Islamic State. Official media has continually alleged a tie between escalating violence in Xinjiang and jihadi groups abroad, though independent commentators have raised issue with that assertion. (Bloomberg reports that officials have also been ramping up a global operation launched last year to bring home terror suspects from abroad, amid which there are concerns that Uyghurs who fled for safety may also be swept up. Also see CDT’s coverage of Uyghur refugees in Turkey and their motivations for fleeing China.)

One item on the table at the legislative meetings was a controversial draft counterterrorism law that had drawn criticism from activists for its human rights implications and from foreign diplomats for its requirement that tech firms comply with new government demands. Reuters reports that China’s Foreign Ministry announced that deliberation on the law will move forward, but that it has not yet passed.

As of March 17, several new keyword combinations related to violence in Xinjiang have become sensitive search terms on Weibo. Baicheng [County] + police (拜城＋警察) and Pishan [County] + explosion (皮山＋爆炸) refer to two attacks that went unreported by official media last month, the first in Aksu Prefecture, and the second in Hotan Prefecture. Also blocked is  Kashgar + something happened (喀什＋出事), which could refer to the two attacks mentioned in the circular above.