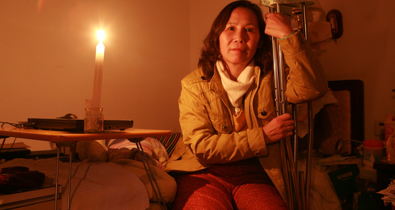 The Hong Kong Free Press reports that civil rights lawyer and activist Ni Yulan was disallowed traveling from China to Washington D.C. to accept a State Department award for her advocacy work. Ni was one of 14 women to be granted the 2016 U.S. Secretary of State’s International Women of Courage Award, and was the only recipient not present at the award ceremony yesterday in Washington. Ashley Chan reports on Ni’s activism, recent harassment from authorities, and Secretary of State John Kerry’s comments in her:

“They said the reason being I was directly related to the 709 [“Black Friday“] crackdown so I am not allowed to leave the country,” Ni told RFA.

She was later forcefully kicked out of her home in Beijing by a group of anonymous people on March 26, Ni told Voice of America (VOA) on Tuesday.

[…] Ni had been giving legal advice to Beijing residents whose homes had been slated for demolition. She was jailed twice and – according to Human Rights Watch in 2002 – became handicapped after being tortured in prison.

[…] During the award ceremony, US Secretary of State John Kerry praised Ni’s efforts to defend Beijing’s residents. “Ni Yulan has paid a steep price for her efforts to assert the legal rights of Chinese citizens,” he said. “Her outspokenness has led her to imprisonment, during which she was beaten so badly that she became paralyzed from the waist down, but that hasn’t stopped her.” [Source]

The New York Times’ Javier C. Hernández reports on the work that won Ni the recognition, on U.S. officials’ criticism of the travel ban, and on her continuing harassment from Chinese authorities:

[…] “Ni Yulan was recognized as an international woman of courage for her work advocating for and defending the rights of Chinese citizens under the P.R.C. Constitution and laws,” Benjamin Weber, a spokesman for the American Embassy in Beijing, said, using the abbreviation for the People’s Republic of China. “We have raised our concerns about Ms. Ni’s passport refusal with the Chinese government.”

[…] Ms. Ni has a history of clashing with the government over rights issues and has been imprisoned several times. She rose to prominence defending the property rights of Beijing residents before the 2008 Olympic Games there, as the government sought to bulldoze homes to make way for sports complexes and other facilities.

In 2002, while serving a prison sentence, she was beaten so badly that she was left paralyzed from the waist down. After serving another sentence from 2008 to 2010, she was left homeless; her family residence was demolished and the authorities made it difficult for her to rent a new apartment.

In recent days, even after her passport application was denied, she has continued to face harassment. On Saturday, she said, a group of about 20 people forcibly removed her from her home in Beijing and beat up her husband. Later, Ms. Ni said, the company managing the property informed her that it had faced pressure from state security forces to evict her. [Source]

The Global Times has dismissed Ni’s award as an attempt by the U.S. to “smear China’s image and stir trouble,” and presented a far less flattering account of Ni’s career:

The purpose of such an award is to demonstrate that the West supports and sides with justice, and therefore proves that China does not support justice and suppresses activists … Behind [the award] there is a hidden agenda to promote the political ideology of the West,” Wang Sixin, a law professor at the Communication University of China, told the Global Times on Wednesday.

[…] “The fact that Kerry was present at the award ceremony shows that the award is guided by the US government with the help of the US media,” Wang said.

“The US media are in fact driven by politics and often serve US national interests,” Wang noted.

His opinion was echoed by Liu Huawen, a human rights scholar at the Chinese Academy of Social Sciences.

“The topic of human rights is an old Western trick of political correctness. They often choose to stir up stories of certain people that would spark public debate,” the human rights scholar told the Global Times on Wednesday. […] [Source]

Beijing is known to counter foreign criticism of its human rights record with claims that such critique is a politicized effort to undermine China, and the U.S. and China regularly engage in back-and-forth critique of each others’ records.

With Xi Jinping in Washington today for President Obama’s final Nuclear Security Summit, leaders of the Congressional-Executive Commission on China have called on the U.S. president to prioritize human rights in a sideline meeting with his Chinese counterpart, whose administration has overseen crackdowns on civil society activism, free expression, and legal advocacy. From a CECC press release:

In advance of a bilateral meeting on the sidelines of this week’s Nuclear Security Summit between President Obama and Chinese President Xi, Representative Chris Smith and Senator Marco Rubio, the Chair and Cochair respectively of the bipartisan Congressional-Executive Commission on China (CECC), today sent a letter to President Obama urging him to press the Chinese President on the marked deterioration in human rights and rule of law conditions since Xi Jinping took power.

The Chairs highlighted the arrest and disappearances of human rights lawyers and the expanded use of televised confessions as trends that “defy any notion of the rule of law in China.”  They expressed concern about the unexplained disappearances of the Hong Kong booksellers and the arrest of foreign citizens, particularly U.S. citizen Sandy Phan-Gillis, as issues that raise questions about the durability of China’s promises to ensure “a high degree of autonomy” for Hong Kong and the safety of Americans doing business in China.  The Chairs raised several prominent cases of prisoners of conscience, including Ilham Tohti and Liu Xiaobo, and urged President Obama to present the Chinese President with a “priority prisoner list.”

The full text of the letter is included below.   In addition, see remarks by Representative Smith, made at a March 29, 2016, press conference on the Obama-Xi meeting entitled, “Sidelining Human Rights a Strategic Mistake the U.S. Cannot Afford to Make.” [Source]

Mentioned in the CECC letter was the “Black Friday” crackdown on rights lawyers that Ni Yulan cited as her reason for being barred from travel, the prison sentences of moderate Uyghur activist Ilham Tohti and Nobel laureate Liu Xiaobo, the illegal confinement of Liu’s wife Liu Xia, the increase in “presumably coerced” televised confessions, the detainment of U.S. citizen Sandy Phan-Gillis with no charge, the erosion of religious and press freedoms, and the disappearances of Hong Kong publishers known for releasing salacious titles on Chinese leaders. For more on the CECC letter, with extensive context on the Hong Kong publishers, see coverage from the South China Morning Post.

Following the Xi-Obama sidelines meeting, the AFP reports that the two leaders pledged to “cooperate to confront the North Korean nuclear threat while working to narrow persistent differences over cybersecurity, human rights and maritime conflicts.” The coverage mentions that the two countries are “long at odds over human rights,” but doesn’t indicate that Obama directly pressed Xi on the topics raised by the CECC.