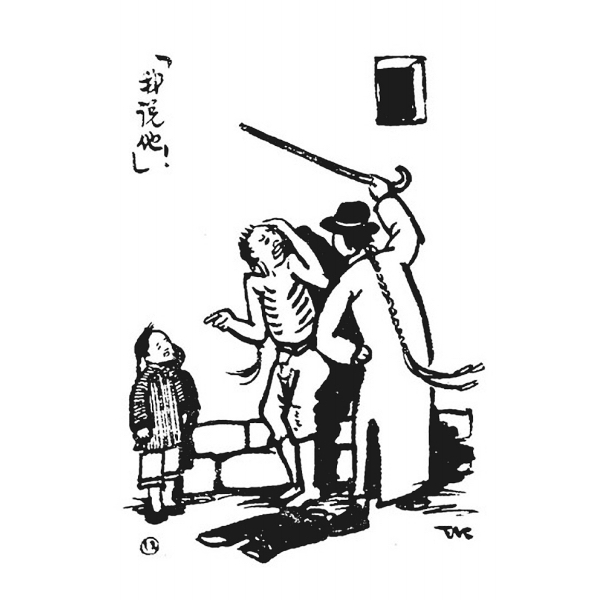 He Anquan, the blogger who impersonates President Xi Jinping, brings us a cautionary mashup of Lu Xun’s classic novella “The True Story of Ah Q” and the fallout from the Panama Papers, the massive leak of documents revealing investment in offshore companies by relatives of at least eight current and former members of China’s top political body.

Master Zhao and his clan, the powerful village elite from Lu Xun’s original story, have come in the past few months to represent the rich and politically-connected in contemporary China. He Anquan casts Master Zhao unequivocally as Xi Jinping and Ah Q as an imprudent truth-teller. Amah Wu, the Zhaos’ only female servant in the original story, never appears, but Ah Q can sense her lurking in the shadows. He’s adaptation includes references to the government’s long-running war on rumors, and to suggestions that the Panama Papers are a Western plot.

When Master Zhao’s name appeared in the Panama Papers, everyone in Weizhuang suddenly realized that Master Zhao hadn’t been planning to govern Weizhuang forever after all. The appearance of his name wasn’t frightening in and of itself, nor were they frightened by the idea that Master Zhao would want to leave, sooner or later. What was frightening was that even the highest managers of society, the holier-than-thou, rule-abiding Zhaos, had not the slightest interest in sharing their fate with the people of Weizhuang.

More and more poor people gathered around Master Zhao’s doorway, talking over each other about how the rumor that the Zhaos had been making off with bundles of cash had finally been proven. Some said that the revolutionary army had already infiltrated Weizhuang, which was about to collapse–that’s why the Zhaos were in a hurry to get out. Others said, No way, the dates on the Panama Papers prove that the Zhaos were already making their escape plans way before anyone had ever even heard of the revolutionary army. And some even said that other rich folks in Weizhuang probably had their bags packed, too.

But the lacquer-black door of the Zhao family home stayed shut tight, with no sign of activity within.

Just as the discussion was starting to wind down, Little D suddenly asked a question that surpassed his past level. “Why does the Zhao family want to run away? Aren’t they always saying we should uphold the Three Confidences? Didn’t they draw up the 13th five-year plan? And haven’t they been beating their chests about leading the people of Weizhuang into an era of moderate prosperity?”

Feeling that Little D deserved praise, Ah Q said, “Your question really is on a whole ’nother level, Little D. I didn’t think of that!” But not wanting to let Little D steal the limelight, either, Ah Q continued, “You’d really have to be something else to be able to answer that question.”

Little D patted his own head. “It took all my smarts just to think that one up.”

Ah Q saw his chance. It’d really impress them if he could answer Little D’s question, even more than Little D himself had impressed them. He looked around for Amah Wu. Instead, he only saw a young nun looking in his direction from a ways off. So he puffed up his chest a little.

Ah Q found a rock to stand on. Tiptoed, he said, “We used to care too much about the Zhaos. We always thought that Master Zhao made this or that mistake–you know, really messed up his long-term prospects for staying in power. We all thought it was really strange, no? But now the riddle has been solved! It turns out that he never really cared about staying in power for the long haul!”

The crowd nodded and shouted their approval. It seemed Ah Q was gaining fans. Even the distant nun seemed to be laughing at him. Amah Wu still hadn’t shown up, but he was sure she was hiding somewhere close by, listening.

Ah Q swallowed and kept going. “Real estate prices in Weizhuang are sky high, but the air and water are polluted. Social security is a joke, but they’re printing money without fear of devaluation. It all just goes to show that the Zhaos’ basic idea is to leave once Weizhuang fails. The day that everything goes to shit, that’ll be the day they leave for good.”

With a loud creak, the door of the Zhao family home suddenly opened, and out walked none other than Master Zhao himself. A pack of servants armed with Hanyang 88 rifles parted the crowd.

“Ah Q, gathering a crowd to cause trouble again, I see,” Master Zhao shouted, shaking with anger. His voice shook. The air itself seemed to shake with the force of his shouting. Ah Q, Little D, the nun, and everyone else all shook with fright.

“M-M-Master Zhao,” started Ah Q. “You’ve got it all wrong! First, I didn’t get nobody together, they did that all on their own. And second, I didn’t cause any trouble.”

Master Zhao jabbed a finger straight at his nose. “You’re spreading rumors and misleading the public. I heard you loud and clear, and now you’ve got the gall to deny it?”

Ah Q wished he was dead. Master Zhao heard 80 percent of everything he’d just said. He had to explain himself, quick. He looked all around for a way out.

Even if Ah Q had come up with an explanation, how could Master Zhao let him off the hook? With a wave of his hand, Master Zhao signaled the servants to tie up Ah Q. The Republican era was pretty civilized, all things considered. Between getting tied up and getting shot they’d always let the victim say a few words, kind of like leaving a message or sending a text nowadays.

Ah Q took a deep breath and pretended to be calm. “The Panama Papers must have been an attempt by hostile powers to frame Master Zhao! I got tricked and lost my way for a moment. That’s why I misspoke. Fellow villagers, Ah Q admits his crime and accepts his punishment. I just hope you’ll learn from my mistake. Don’t believe rumors and don’t spread ’em, neither! Unless you see Master Zhao and his whole family pack up and leave this compound and Weizhuang with your own eyes, then and only then should you believe it.”

Having spoken, he swaggered away.

A few days later, news reached Weizhuang that Ah Q had been beheaded for inciting subversion and subversion of state power. For a time, everyone was thrown into a panic. They all locked their doors to save themselves.

A few months later, in the middle of the night, people saw Master Zhao and his whole family pack up and leave town. Their gold, silver, and jewels filled several shipping containers. At daybreak the people trickled into the empty compound, until nearly the whole village was there. No one said a word. They just stood, slack-jawed, as if they didn’t know one another anymore.