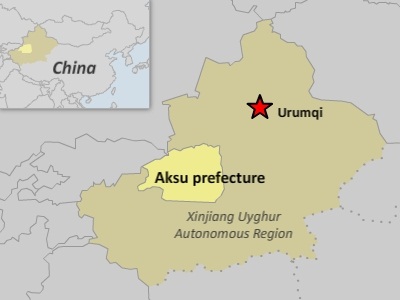 Radio Free Asia reports that an ethnic Uyghur in Aksu, Xinjiang was sentenced to seven years in prison in February, allegedly for watching a film on Muslim migration. Authorities suspected that the man was planning on leaving Xinjiang to “wage jihad” along with four family members (who were also detained, though no details on additional sentences were reported). RFA’s Shohret Hoshur reports on the alleged infraction, noting confusion expressed by a local security official:

Eli Yasin, a resident of Chaghraq township in Aksu (in Chinese, Akesu) prefecture’s Onsu (Wensu) county, was sentenced in February after being held since May 2015, sources said, adding that authorities had suspected Yasin and family members who viewed the film with him of planning to go abroad “to wage jihad.”

Family circumstances argued against their having had such a plan, though, Hesen Eysa, security chief for Yasin’s Karasu village, told RFA’s Uyghur Service.

“All of them were over 40 years of age,” Eysa said. “They had a farm, and they were struggling to survive and provide for their children’s education.”

“They showed no signs of opposing the government.  At least I never saw any signs of this,” he said.

“As a security chief, I am having a hard time explaining these charges to the people in my village.” […] [Source]

Two years ago Beijing launched an “ultra-tough” crackdown on terrorism in response to rising violence in the Xinjiang region and elsewhere in China. Amid the crackdown, officials and state media have sought to link attacks in China to the global jihad movement, and attempted to rally international support for their controversial campaign. While ethnic Uyghurs in Xinjiang have been primary targets in the crackdown, the government has also harassed and collected data on Uyghurs living abroad; three brothers of U.S.-based journalist Shohret Hoshur, the author of the above RFA article, were detained in 2014 and tried last year (two were reportedly released for unknown reasons early this year, and the third is serving a five-year sentence).

In a report on Eli Yasin’s prison sentence citing RFA, The Washington Post’s Ishaan Tharoor has more on the Beijing’s ongoing campaign against terrorism and claims of links to global terror networks:

Chinese authorities claim numerous Uighur militants have joined the Islamic State and other militant groups operating closer to home in Afghanistan and Pakistan. The prospect of unrest and terrorist violence has led to ruthless crackdowns, including a raid last December when Chinese paramilitary forces killed 28 suspected militants in an operation that involved flushing the suspects out of a cave with flamethrowers.

As my colleague Simon Denyer has reported, Beijing employs rather heavy-handed policies when reckoning with religion in this restive corner of China. Authorities in Xinjiang have censored sermons delivered at mosques, forced public servants to forsake their fast and eat during the holy month of Ramadan, and have made devout Muslim men and women shave their bears and remove their veils.

For more on China’s “war against terror” see prior coverage via CDT.