Activist Chen Yunfei to Go on Trial this Week 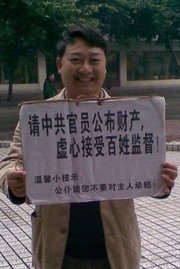 Activist Chen Yunfei is scheduled to go on trial Thursday on charges of “picking quarrels and provoking trouble,” related to his work to commemorate the June 4, 1989 crackdown on protesters in Beijing. Chen is a long-time activist who has participated in various activities in recent years to pay tribute to individuals who were killed in 1989, including Wu Guofeng, a 20-year-old student who was killed by soldiers while taking photographs on June 4. Tom Phillips reports for The Guardian:

Before his detention, Chen, a 48-year-old Tiananmen survivor, had sought to draw attention to the killings and had used social media to denounce human rights abuses in China.

“Would a democratic country use tanks and real bullets against its own people?” he told the BBC in 2009. “I don’t think so.”

As part of his activism, Chen made annual trips to the small memorial where Wu Guofeng’s ashes are kept in Xinjin, the rural town in south-west China where he was raised.

On 25 March 2015, shortly after making one such visit with the dead student’s family, Chen was detained as part of the latest chapter of Beijing’s war on dissent. Fellow activists accused authorities of attempting to silence an outspoken critic. [Source]

Edward Wong of The New York Times reports on the charges against Chen, which focus on his social media presence:

The activist, Chen Yunfei, 48, uses performance art to criticize the Communist Party and is a close friend of other Chinese intellectuals, including the author Liao Yiwu, who lives in Germany and is also from Mr. Chen’s home province, Sichuan. Mr. Liao has written about Mr. Chen’s detention.

The authorities have charged Mr. Chen with “picking quarrels and provoking trouble.” The police in China have been using the charge in many prominent cases against dissidents. The police also wanted the court to try Mr. Chen on a charge of “inciting subversion of the state,” but that charge has been dropped.

In 2013, the top legal bodies expanded the definition of the “picking quarrels” charge to include online writing, and the security forces have wielded it as a legal weapon against liberal voices on the internet and people carrying out protests or other acts judged to be overly critical of the party or the state.

A document from prosecutors that was posted by Mr. Chen’s lawyer accuses Mr. Chen of taking advantage of having tens of thousands of followers on Twitter to “start rumors about and libel against our country’s political system on the internet many times.” Twitter is among the foreign websites blocked in China. [Source]

Chen had earlier been detained while trying to attend the trial of activist Tan Zuoren in 2009, and was also harassed in 2013 while visiting the grave of Lin Zhao, a dissident who was executed during the Cultural Revolution. In 2007, he allegedly placed a classified ad in a newspaper in Chengdu, his hometown, to pay tribute to the Tiananmen Mothers, an informal group of people whose loved ones were killed on June 4. The editors of the paper were subsequently fired.

Read more about individuals charged with “picking quarrels and provoking trouble,” via CDT.