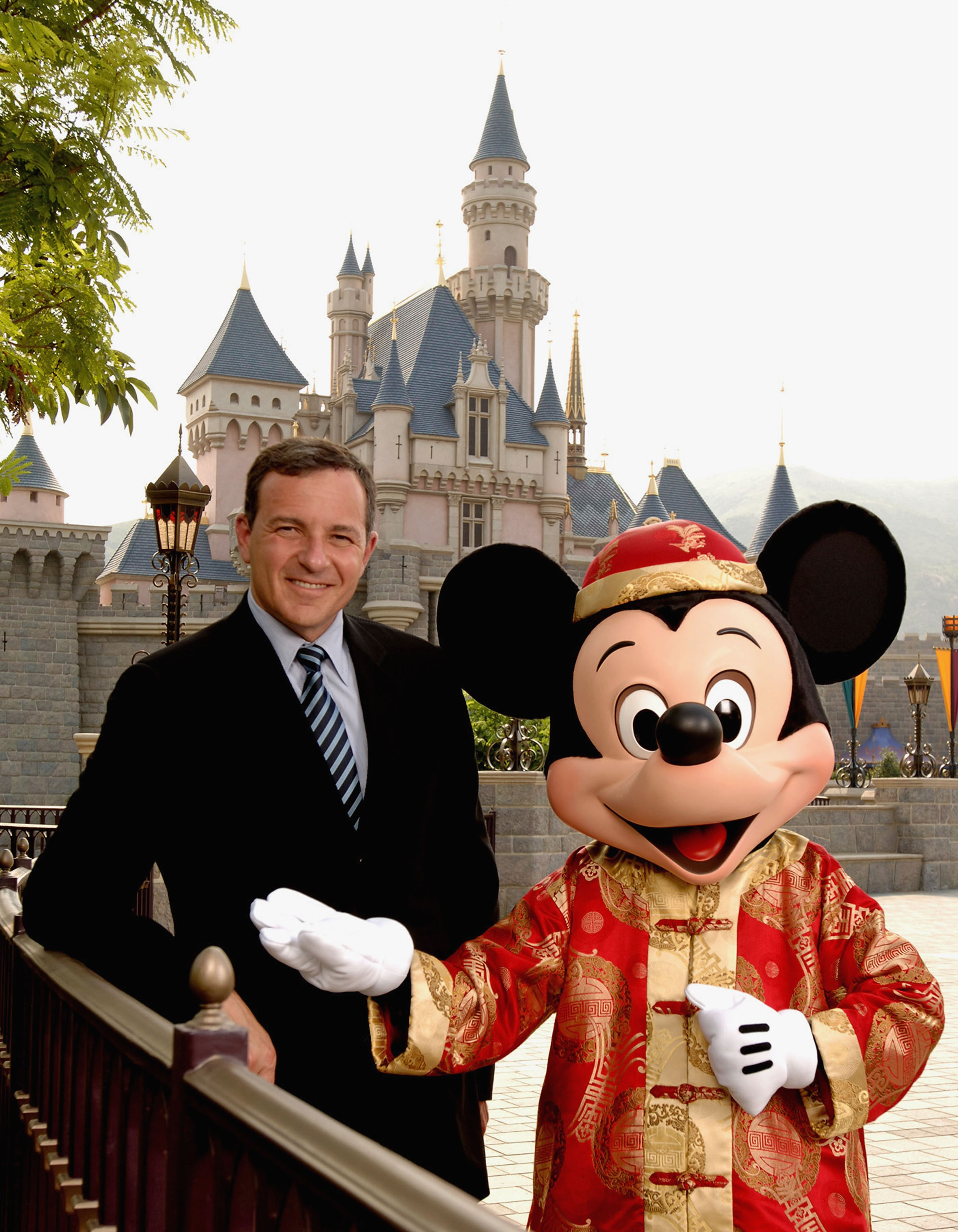 Seven years since getting a green light from Beijing and five since the official breaking of ground, the $5.5 billion Shanghai Disney Resort will open to the public this week. Tickets are already sold out for weeks to come, and nearly a million Chinese fans have reportedly visited the grounds just for a glimpse since a Disney stop opened on Shanghai’s metro in late April. At The New York Times, David Barboza and Brooks Barnes detail the long and complicated history of Disney’s relationship with China, the close dealings between corporate and Party leadership that led to massive and uncharacteristic mutual concessions, and the risks of the complex and multi-tiered partnership between the world’s largest entertainment conglomerate and a government known for distrusting international media firms and foreign culture:

[Walt Disney Company CEO] Mr. [Bob] Iger, 65, has sought a personal relationship with China’s paramount leader, President Xi Jinping. After Mr. Iger learned that Mr. Xi’s father, Xi Zhongxun, a revolutionary leader, had visited Disneyland in 1980, he pressed his staff to find a photograph. A color photograph shows the president’s father, who died in 2002, wearing a Mao suit, shaking hands with Mickey Mouse. Mr. Iger presented it to the Chinese leader as a gift and a symbol of their partnership.

[…] It may be all smiles now, but Mickey Mouse knows all too well what can happen when the Middle Kingdom gets mad.

The year was 1997, and Disney had finally found a bit of success in China. “The Dragon Club,” a Disney cartoon series, was popular in Chinese homes, and “The Lion King” had given Disney its first big hit in Chinese cinemas. But then came [14th  Lama biopic] “Kundun.”

“All of our business in China stopped overnight,” Disney’s chief executive at the time, Michael D. Eisner, recalled.

[…] Mr. Eisner said the company had learned a lesson. And he introduced Mr. Iger, then Disney’s international president, as the person who would carry on negotiations for a theme park. The Chinese prime minister responded favorably. Land in Shanghai, he said, had already been set aside.

And just like that, the door to China started to reopen. [Source]

The many compromises made by Disney in securing the new resort mirror those made by other foreign companies seeking access to China’s market. Hollywood film studios, for example, have been known to alter content to secure a coveted spot on the short list of foreign films allowed in China each year, and social media companies have proven willing to follow Beijing’s censorship demands for a China launch.

Bloomberg News also reports on Disney’s adaptation of a unique China policy to ensure the opening of the new Shanghai resort, requiring the company to alter its normal television-fueled, content-based brand promotion strategy:

Eleven years ago, Disney executives may not have fully understood how zealously the Chinese government polices its airwaves for programming from foreign operators. Disney has had to shift away from its content-focused strategy that has reaped profits in other foreign markets, mainly through Disney Channels Worldwide that broadcasts in 160 countries. In China, the company has had to focus more on its theme park and English-language schools to monetize its brand.

[…] In 2008, the company started a chain of English-language schools for kids from ages 2 to 12, using class materials that feature Disney characters such as Buzz Lightyear and Nemo. It now has 28 learning centers in seven cities across China.

[…] On Tuesday, Disney will hold a a red-carpet premiere of the Mandarin-language version of the Broadway musical, “The Lion King,” the highest-grossing Broadway musical ever with more than $6 billion in tickets sales worldwide. […] [Source]

Aside from the many bureaucratic and political challenges that have surrounded the realization of Disney’s new Shanghai kingdom, there have been practical concerns behind the park’s construction and opening as well. Since as early as 2010, there have been reports on forced evictions of thousands of Shanghai residents to make space for the park. More recently, many other residents and business owners have been evicted either to make way for further construction or to mitigate air pollution ahead of the opening. The AP reports:

The authorities in Shanghai have evicted hundreds of residents and dozens of businesses to clean up the air and make way for the newest Disney theme park, which opens on Thursday.

Residents were paid for lost homes, but hundreds of employees of closed factories say they do not know where their next jobs will be.

[…] In the district near the Disney site, at least 153 factories have been ordered to close this year to cut pollution, according to the local government. Most are workshops that employ 10 to 20 people producing goods ranging from clothing to chemicals. [Source]

State-run new media venture Sixth Tone reports on one of the many migrant workers who’s toil resulted in the Shanghai Disney Resort:

Behind such income flows is an army of migrant workers like Xie. They have come from all parts of China, from as far away as northeastern Liaoning province near Russia, to mountainous Yunnan province on China’s southern border with Myanmar.

[…]“Construction workers are the most unstable category of migrant workers, and their job is more physically demanding compared to others,” said Lu Huilin, an associate professor at the sociology department of Peking University.

Daily wages for a construction worker typically range between 100 and 300 yuan. While these wages are better than what workers in many other industries can expect to receive, annual income can vary widely depending on the actual number of days worked each year.

[…] “Since he was born, I have seen my child fewer than five times,” Xie says. “When he was a year old, I saw him at home. He was so affectionate toward me, cuddling up against my chest.” [Source]

As Disney was cozying up to China’s leadership and migrant workers like Xie were laboring to construct the multibillion dollar resort over recent years, labor NGOs have repeatedly noted shoddy conditions facing factory workers who make Walt Disney Co. products in China. At the Hong Kong Free Press, Catherine Lai reports on Hong Kong NGO Students and Scholars Against Corporate Misbehavior’s criticism of Disney’s continued failure to protect workers on its supply line in China:

“We think that it’s important to stick all the crushed fingers, all the bloody photos in front of them, to let them see that it’s happening in reality in China, inside their own factories,” Chen told HKFP.

[…] Despite changes made since a 2005 report, Disney is still failing to protect workers in its Chinese supplier factories from injuries and poor working conditions, an investigative report by the NGO said.

Ahead of the long-anticipated opening of the Shanghai resort, homegrown real estate and entertainment conglomerate Dalian Wanda Group last month launched their own park in Nanchang, Jiangsu, about 450 miles east of the new Disney park’s site. A report last month from AP’s Paul Traynor and Gerry Shih described the opening of “Wanda City,”  Wanda’s role in China’s soft power push, and the curious presence of Disney-esque icons in the park:

Wanda executives unveiled their $3 billion “Wanda City” in the southeastern provincial capital of Nanchang to thundering music reminiscent of the “Pirates of the Caribbean” theme and hailed the center as a representative of Chinese entertainment culture in the face of encroaching foreign influences.

[…] As a leading player in Chinese firms’ globalization push, the property group has invested heavily in the film and cinema business and has spoken openly about its nationalistic mission to fend off Disney in the Chinese market and become an entertainment brand recognized around the world.

[…] Seeking to capitalize on China’s rising middle class, developers are planning dozens of Chinese theme park, along with projects from U.S. firms like Universal Studios, DreamWorks and Six Flags. But instead of seeking to capture China’s top tier cities like Beijing or Shanghai, Wanda has built parks in smaller but still massive cities like Wuhan, where it regularly presents the “The Han Show” — a Cirque du Soleil-style acrobatic performance that’s based on the traditional culture of the Han, China’s largest ethnic group.

Even so, there were signs of Disney’s presence in Wanda City. Tourists who opted against paying 198 yuan (about $30) for the theme park and headed for the shopping mall were greeted by what looked like a woman in a Snow White costume as well as storm troopers, the armored soldiers from the Star Wars franchise owned by Disney. [Source]

The likeness of Snow White’s and several of her Disney comrades on the Wanda site prompted Disney executives to threaten legal action. Just ahead of the launch of the Wanda park, Wanda chairman Wang Jianlin had criticized Disney for a failure to innovate on a CCTV interview.