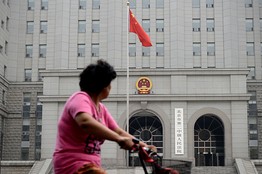 A series of high-profile overturned convictions—some posthumous—has provoked public outrage in recent years. Subsequent moves to address the problem have met with some approval, but critics warn that real lessons have not been learned and that those responsible have generally escaped serious punishment. Meanwhile, the process of challenging unfair verdicts remains lengthy, arduous, and unreliable. The Dui Hua Foundation examines some of the remaining obstacles, as well as proposed remedies:

Increased attention to wrongful convictions in recent years has caused Chinese judicial authorities to retry more criminal cases and exonerate greater numbers of long-serving prisoners. What these trends mask, however, are the formidable obstacles of getting a criminal case reopened in China.

Whether one looks at the case of Chen Man—released earlier this year after serving 21 years for a murder he didn’t commit—or the posthumous exoneration of Huugjilt in 2014—18 years after his execution—it is clear that it takes many years of petitioning just to get authorities to consider reopening a case. [See details on both cases via CDT.] After a petition is accepted, it can still take years to decide whether it meets the criteria for retrial, as demonstrated by the ongoing effort to secure posthumous exoneration for Nie Shubin.

Critics point out that the protracted and arbitrary manner in which these post-conviction appeals are handled is almost as damaging to the credibility of the judicial system as wrongful convictions themselves. Late last month, a group of lawyers and legal experts met in Beijing to discuss ways to address this problem, indicating that reform may be on the horizon.

[…] First is the simple fact that getting a case reopened relies to a considerable degree on getting judicial authorities to acknowledge the possibility that they made a mistake. Human nature makes this difficult enough, but recent personal accountability measures imposing “lifetime responsibility” for errors in the judicial process may make police and judicial authorities more resistant. This is why lawyer Mao Lixin, who has handled a number of wrongful conviction cases, thinks that such measures need to be calibrated to incentivize individuals and institutions to admit and remedy past mistakes. [Source]

Suggestions include the addition of clearer formal procedures to the Criminal Procedure Law, and the establishment of an independent review body, so that petitions are not handled by the same organs as the original case. Even so, Duihua warns, “individuals convicted of endangering state security and other political crimes will likely continue to find it nearly impossible to have their cases retried,” while others may be deterred by fear of reprisals.

Other proposals which attracted media coverage during this year’s Two Sessions legislative and advisory gatherings aim to prevent wrongful convictions in the first place. Some involve undermining the presumption of guilt that often exists in current practice and can encourage the forced extraction of false confessions. Others, like the independent review body mentioned above, involve better separation of roles in the justice system like those of police, prosecutors, and judges, who now reportedly act as “one family,” and of jailers and investigators, whose current overlap provides conditions conducive to prisoner abuse. Read more on these proposals and official resistance via CDT.

As Fu Danni writes at Sixth Tone, the falsely accused are not the only ones who suffer in cases of wrongful convictions. Chen Man’s release, for example, has been reawakened the trauma of his supposed victim’s family:

Chen’s is one of a growing number of overturned cases. China’s courts have long convicted nearly all suspects, but as the country’s security and legal apparatuses mature, many of those convictions have turned out to be based on trumped-up charges and forced confessions. In this year’s address to the National People’s Congress, China’s top legislative body, Supreme People’s Court President Zhou Qiang said that in 2015, China’s courts had reviewed about 1,300 cases of suspected miscarriages of justice.

In the weeks following his release, Chen became a nationally recognized character, as media scrambled to report every detail of his story. He had set the unenviable record of having served the most time — nearly 23 years — for a crime he didn’t commit.

In the murder case of Zhong Zuokan, one victim, Chen, has finally found closure. But for Zhong’s family, old scars have been ripped open.

The passing of two decades hasn’t diluted the pain for Li. “The dead body in the morgue appears in my mind every night,” she says. “I will never, ever forget that image.” Li is now 70 years old. Her hair has turned gray, and her face is covered in wrinkles. As she speaks, it’s as if the events she is talking about happened only yesterday. [Source]