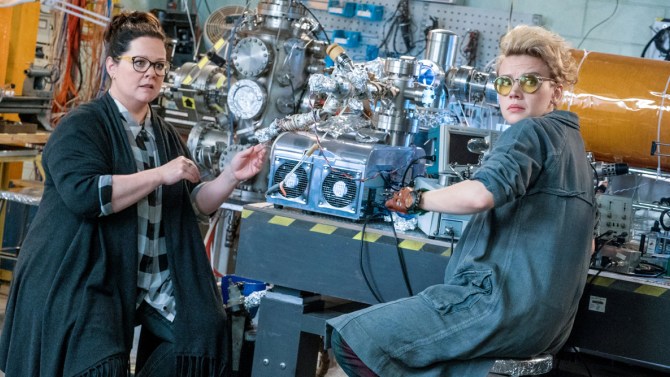 Brent Lang at Variety reports that Paul Feig’s new “Ghostbusters” reboot is unlikely to be screened in China due to censorship rules banning films that promote “cults or superstitious beliefs”:

It’s bad news for the $144 million comedy, which needs to do well globally to make back its hefty budget. Though “Ghostbusters” hasn’t officially been screened for Chinese officials, its subject matter will likely run afoul of the country’s censors, according to an insider. The state-controlled film board does not approve of films that promote cults or superstitious beliefs. In the past, movies that focus on the paranormal, such as last fall’s “Crimson Peak,” have been unable to secure a berth in the country.

To try to assuage censors, Sony has cooked up a new title for “Ghostbusters” — it’s now known as “Super Power Dare-to-Die Team.” China continues to be a critical source of revenues for major Hollywood blockbusters. […] [Source]

Other studios have reportedly gone much further to secure market access: Marvel came under fire this spring for rewriting a Tibetan character in an alleged attempt to appease Chinese authorities. At The Hollywood Reporter, however, Patrick Brzeski writes that despite the name change, the film’s perceived lack of market appeal in China is a weightier factor than censorship:

Many guessed that Sony made the adjustment in hopes of finessing the film into China’s strictly regulative but increasingly lucrative theatrical market.

But sources close to China Film Co., the dominant state-owned film body that handles the import and release of all foreign movies in the country, tell THR that censorship wasn’t the determinative issue.

“It’s been confirmed that Ghostbusters won’t be coming to China, because they think it’s not really that attractive to Chinese audiences,” says one Chinese executive. “Most of the Chinese audience didn’t see the first and second movies, so they don’t think there’s much market for it here.”

Sony isn’t commenting, but a Hollywood source with knowledge of the situation says the film hasn’t been officially submitted for approval by Chinese regulators. [Source]

Whatever the reason, a no-show in China could seriously dent the film’s global box office prospects as China continues to be a major and growing source of revenue for Hollywood films. Henry Barnes at The Guardian reports:

Under China’s censorship laws any films suggesting the existence of the supernatural can be banned from distribution. Exceptions are made for ghost stories based on Chinese mythology or films in which the supernatural is explained by a realistic rationale (eg drug use or dream sequence). Among the films that have fallen foul of the ruling in the past is Pirates of the Caribbean: Dead Man’s Chest and Crimson Peak, Guillermo del Toro’s gothic horror starring Tom Hiddleston.

China runs a quota on the number of American films allowed into the country, yet Chinese audiences have often offered a lifeline for US productions that struggled at home. Warcraft, Duncan Jones’s adaptation of the popular video game, bombed in the US, but dominated the Chinese box office chart last month. Known locally as “World of Magic Beasts”, it made more than half of its $430.1 m revenue in China.

Feig’s comedy is expected to face a tough time at the US box office this week, with analysts expecting it to take a maximum of $50m (from a reported $144m budget) in its opening weekend. The film, which has received generally good reviews, has been hit by a wave of criticism from those who are annoyed at the idea of female Ghostbusters. [Source]