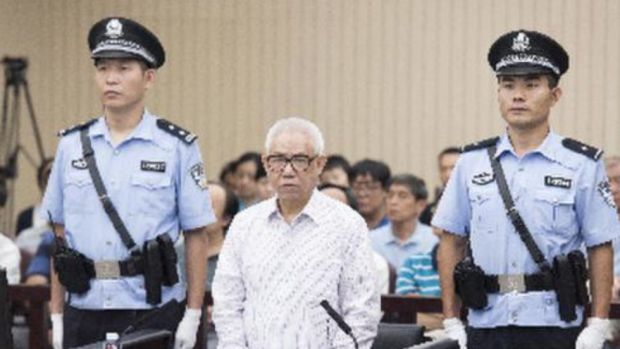 A Tianjin court has sentenced longtime human rights activist and underground Christian church leader Hu Shigen to 7.5 years in prison for “subversion of state power.” Hu, who was one of the first detained last July in the “Black Friday” crackdown on rights lawyers and advocates, becomes the second activist this week to be sentenced after Zhai Yanmin received a surprisingly light three-year suspended sentence for the same charge on Tuesday. At least two others are expected to receive verdicts this week. At The Guardian, Stuart Leavenworth reports on Hu Shigen’s sentence, activism, and previous time in prison:

Hu Shigen, a leader of an underground church movement, was found guilty of subversion, sentenced to seven years and six months’ imprisonment and derived of political rights for five years.

[…] Previously, Hu spent 16 years in prison for other political offences, including sharing leaflets about China’s 1989 crackdown on protesters in Tiananmen Square.

Ahead of this week’s trials, two Black Friday detainees, lawyer Wang Yu and paralegal Zhao Wei, were reportedly released (though their families and legal counsel haven’t yet seen them in public) after making confession-style statements, widely believed to be made under duress. Legal scholar Jerome Cohen wrote in a recent blogpost that their “‘confessions’ are reminiscent of the ‘brainwashing’ era of the 1950s.” Human Rights Watch today criticized the likely coerced confessions and ongoing secret trials of Black Friday detainees, and called for charges to be dropped on those still in detention from last year’s crackdown.

Language used by Zhao Wei, Wang Yu, and the recently sentenced Zhai Yanmin in their confessions resembles that used in official propaganda blaming “foreign forces” with “ulterior motives” for training activists in an attempt to destabilize China. Hu Shigen’s courtroom confession also emphasized the “criminality” of his advocacy, and contained information that will likely be used against Gou Hongguo, another detainee on trial this week . The South China Morning Post’s Jun Mai and Nectar Gan report:

Hu pleaded guilty, saying he had taken the “criminal path” to promote Western-style democracy since the 1989 Tiananmen Square crackdown.

He also confessed he was trying to overthrow the Communist party and pledged that he would not take part in any anti-government or anti-Communist Party activities in the future.

Hu was accused of sending another activist, Gou Hongguo, to Taiwan to take part in the”Interethnic/Interfaith Leadership Conference” organised by US-based NGO Initiatives for China in 2014.

He said he was invited by Yang Jianli, a US-based Chinese dissident and the founder of the organisation.

The conference was attended by “separatists from Xinjiang, Tibet and Inner Mongolia in China, as well as other democratic activists” and they shared views about how to overthrow one-party rule on the mainland through “colour revolutions”, the prosecution alleged.

Gou is due to appear in court in Tianjin this week. [Source]

At The New York Times, Javier C. Hernández reports on belief from Hu’s friends and colleagues that his guilty plea was coerced:

Mr. Hu pleaded guilty, according to Xinhua, although his friends said his admission was probably coerced.

[…] “The message is clear: The government wants to show that it does not tolerate any dissent,” said Patrick Poon, a China researcher for Amnesty International based in Hong Kong.

[…] At the trial on Wednesday, prosecutors highlighted Mr. Hu’s ties to foreign groups. In a statement before the court, Mr. Hu said he had “long been influenced by bourgeois liberalism,” according to Xinhua.

Friends of Mr. Hu said they doubted that his confession was genuine. Zhu Hong, an activist who served as a leader of an underground church alongside Mr. Hu several years ago, compared him to Nelson Mandela.

“He is a true believer who fights and sacrifices for his convictions,” said Mr. Zhu, who now lives in California. “Making a confession is just a strategy, not his will.” [Source]

At the South China Morning Post, Nectar Gan reports that two of Hu’s brothers were prevented from attending his trial:

Two younger brothers of veteran activist Hu Shigen were barred from attending his hearing and escorted back to their hometown by authorities the day before the trial, according to one of the brothers.

When the grey-haired activist faced a Tianjin court and pleaded guilty to charges of subverting state power on Wednesday morning, his brother Hu Shuigen was hundreds of kilometres away in his home province of Jiangxi, with no idea the hearing was taking place.

[…] Like the relatives of the other defendants facing trials this week, Hu Shuigen was excluded from the courtroom.

He said he had travelled to Tianjin with another younger brother in hopes of seeing the trial. They had not been able to see their older brother for over a year, after he was detained last July. [Source]

China Change has posted an excerpt of a speech delivered in 2005 by exiled dissident Ren Bumei, as he accepted the China Democracy Education Foundation’s award for Outstanding Democracy Activist on Hu’s behalf. Hu was then serving the 13th year of his 20-year prison term for his role in the 1989 pro-democracy movement. This is the first of four essays in an ongoing series on Hu, focusing on his life, activism, and earlier imprisonment:

In 1995 Mr. Hu Shigen was sent to Beijing Second Prison to serve his term. That prison became notorious because of him. He fasted on June 4 every year to commemorate the massacre and the dead. For nine years he was locked up in a brig cell (禁闭室) for “rejecting reform” and “inciting disturbances.” Because of police brutality, his hands and feet are permanently crippled. This year The Washington Post interviewed John Kamm of the Dui Hua Foundation. According to Mr. Kamm, the Chinese government told him that Hu Shigen was not qualified for parole based on his attitude toward reforming himself. So Mr. Hu Shigen is continuing his one man defiance of the state.

I agree with the assessment of others: Hu Shigen is a prominent political prisoner that few know about. Even though over 20 people across China were thrown in jail in the case of the “Chinese Free Democratic Party,” and it has been declared the biggest “counter-revolutionary ring” since 1989, the case has received little media attention, and few have paid attention to Mr. Hu Shigen’s conditions. Early last year, a friend googled “胡石根” and found only 600 or so results.

[…] Having spent 13 years in prison, he has developed health conditions that have never been effectively treated, such as hepatitis B, lumbar disc herniation, rheumatoid arthritis, and migraines. On October 17, 2004, his older sister Hu Fengyun wrote to the prison authorities voicing her concern about his health. On December 9, 2004, his younger brother Hu Shuigen wrote me that his health had been deteriorating rapidly and he was afraid that Hu Shigen might die in prison. He called on the international media and human rights groups to “save” Hu Shigen.

In May last year, I met someone in Zhengzhou who was a “criminal” in the same case as Hu Shigen. That was when I began to learn of his story, and I was shaken to the core. While I was ashamed of myself, it was also the first time since 1989 that I felt so proud of China: in this society of victims of political disaster, we have Hu Shigen. I hugged this friend and bid him goodbye, determined to speak out for Hu Shigen.  [Source]

With the Black Friday trials underway, the AP outlines some of the highest profile recent rights cases in China that had been taken up by currently detained rights lawyers from the Fengrui law firm at the center of the crackdown, including that of Uyghur scholar Ilham Tohti (currently serving life in prison), exiled blind activist Chen Guangcheng, and prominent artist/activist Ai Weiwei.