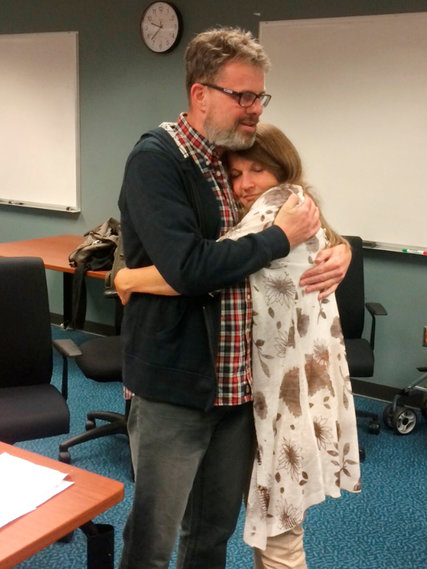 Kevin Garratt, the Canadian citizen who was detained in China on August 4, 2014 along with his wife Julia Dawn Garratt, has at last reunited with his family in Canada after being deported by Chinese authorities on Thursday. His surprise release came after Canadian Prime Minister Justin Trudeau raised the case during his official visit to Beijing earlier this month. Trudeau had come under fire for not pushing rights issues including Garrett’s case more vocally during the trip. David Ljunggren at Reuters reports:

The Canadian leader had raised Garratt’s case during an official visit to China this month when he both pressed for closer economic ties and openly discussed human rights, which is a sensitive matter in Beijing.

“On Thursday, September 15th, Kevin was deported from China and has returned to Canada to be with his family and friends,” the family said in a statement requesting privacy.

A Canadian government official said Garratt had been formally sentenced earlier in the week and then released on bail. He flew into the Pacific city of Vancouver.

[…] The release came as a surprise, since there were few signs of a breakthrough when Trudeau flew to China. Indeed, while he was in Beijing, the Garratt family expressed their frustration at the lack of progress.

“We raised this case at the highest levels when we were there. It’s just indicative of the mature and healthy relationship we have that we can do so,” said the government official, who spoke on the condition of anonymity. [Source]

The Garratts were missionaries who operated a coffee shop near the North Korean border in Dandong before being arrested for suspected theft of military and defense research secrets. The couple were kept in isolation and barred from legal assistance for several months after their initial arrest. Julia Dawn Garratt was released in February 2015 without charge while her husband remained in detention and was later indicted on charges of espionage. Some observers have linked the Garratts’ case to a wider crackdown on Christian organizations on the China-North Korea border.

At The Globe and Mail, Nathan VanderKlippe and Laura Stone look at the efforts of high-level Canadian officials that went into securing Garratt’s release:

The visit to China by CSIS director Michel Coulombe, Canada’s top spy, was one element of that effort, according to multiple sources with knowledge of the meeting. When Mr. Garratt was indicted in January, China’s state media said investigators had found evidence he had accepted tasks to gather intelligence for Canada.

Mr. Coulombe met with Geng Huichang, the minister in charge of China’s powerful state security apparatus, to deliver the message in person that Mr. Garratt, a Pentecostal pastor, did not work for CSIS.

[…] In public and in private, Canadian leaders pressed his case with the highest levels of the Chinese government – Stephen Harper in 2014, on his last trip to China as prime minister, and Justin Trudeau from his first call to Beijing as PM.

[…] Mr. Trudeau repeatedly brought up Mr. Garratt on his first trip to China as Prime Minister earlier this month, including at a private dinner in the Forbidden City with the Premier, a senior government official said. The official said there were indications on the China trip that Mr. Garratt’s case was heading in a “positive” direction. [Source]

In a statement released on Thursday, Prime Minister Trudeau expressed his delight at the news of Garratt’s return:

“We are delighted that Kevin Garratt has returned safely to Canada and is with his family once more.

“We remain deeply impressed by the grace and resilience of the Garratt family, especially Kevin and Julia.

“The Government of Canada has been seized of this case at the highest levels. We want to thank consular officials who work behind the scenes every day in support of Canadians abroad.

“We ask all to respect the family’s wish for privacy at this time.” [Source]

Read more about the Garratts via CDT.

Updated at 22:03 PDT on Sep 16, 2016: Reuters’ Allison Lampert and David Ljunggren report Canadian Foreign Minister Stephane Dion’s denial that any concessions were granted to China in exchange for Garratt’s release:

The unexpected release prompted speculation on what Ottawa might have offered China, which is seeking a free trade deal with Canada, more relaxed investment rules, and the extradition of what Beijing has said are corrupt officials.

“The prime minister … would never do these types of things,” Dion told a news conference when asked what concessions Canada had made.

[…] Asked whether Canada would be more prepared to consider China’s requests for the return of officials, Dion replied, “No, we will do what is right in our relationship with China.”

Gordon Houlden, a former Canadian diplomat with extensive Chinese experience who heads the University of Alberta’s China Institute, said the two nations’ judicial systems were so different that they could never seal an extradition treaty. [Source]