Words of the Week: Truth of the Universe 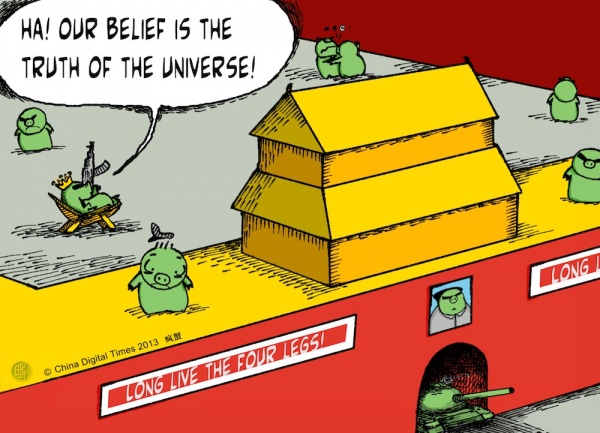 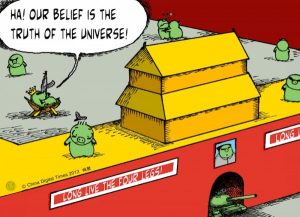 “What We Believe In” (Artist: Hexie Farm 蟹农场 for CDT)

Faced with today’s complex and variable international environment, the task of formidable and complicated domestic reform and development, and the real trials and dangers confronting the Party, serious strengthening of our single-minded cooperation in building faith in the Chinese dream first requires holding fast to our belief in socialism with Chinese characteristics and sincere faith that “the doctrine in which we trust is none other than the truth of the universe.”

Western democracy is already showing signs of decay. This should put on guard those developing countries still searching for a path to building a political system… We must pull apart the language of Western democracy. To have a truly free spirit and an independent national character, we must first take the idea of democracy promoted by a minority of Western countries and demote it from universal to local.

Netizen “Chenli701” summed up the reasoning of the state press: “We have the truth of the universe. Isn’t everything else just local theory? (我们都有宇宙真理了，其他还不是地方理论). These two contradictory pieces of propaganda gave rise to the often sardonic use of “truth of the universe” in online discussions of China’s political system.

In 2016, some used the phrase when commenting on a turbulent U.S. election season that had captured the attention of both state media and netizens. Replying to a Global Times op-ed on how the Trump and Clinton campaigns exposed the fading value of American-style democracy (see also Global Times’ English language version of the article), “Big V” Weibo user LiWan (@李玩) sardonically said, “The Yankees’ demise is imminent, while the truth of the universe will never falter.” (美国佬灭亡指日可待，宇宙的真理别无分号.) Also on Weibo, user TianlongShanshangRen (@天隆山上人) used the phrase less sarcastically to differentiate the situation in China from the chaos in the U.S. After musing that America’s “problematic” system had delivered them two “problematic candidates,” he claimed that China’s system of consultative democracy gave rise to far more qualified leaders: “We have the truth of the universe, while the Americans have no guiding ideology—how can their leaders be more capable!?” (我们拥有宇宙真理，美国连个指导思想都没有，哪有资格跟我们比啊.)

Over at Zhihu, an anonymous user explained how he scoured the forum’s English-language counterpart Quora in effort to understand how Donald Trump could possibly manage to gain so many supporters. “There was no discussion of why people support Hillary, nor was there any criticism of Trump’s policy. In the answers there were only heaps of praise, as if Trump is some part of the truth of the universe, and no explanation for supporting him is needed.” (这些答案除了变着花样骂川普之外，并没有提供什么有效的信息。既没有讨论支持希拉里的理由，也没有针对川普政策的批评.)