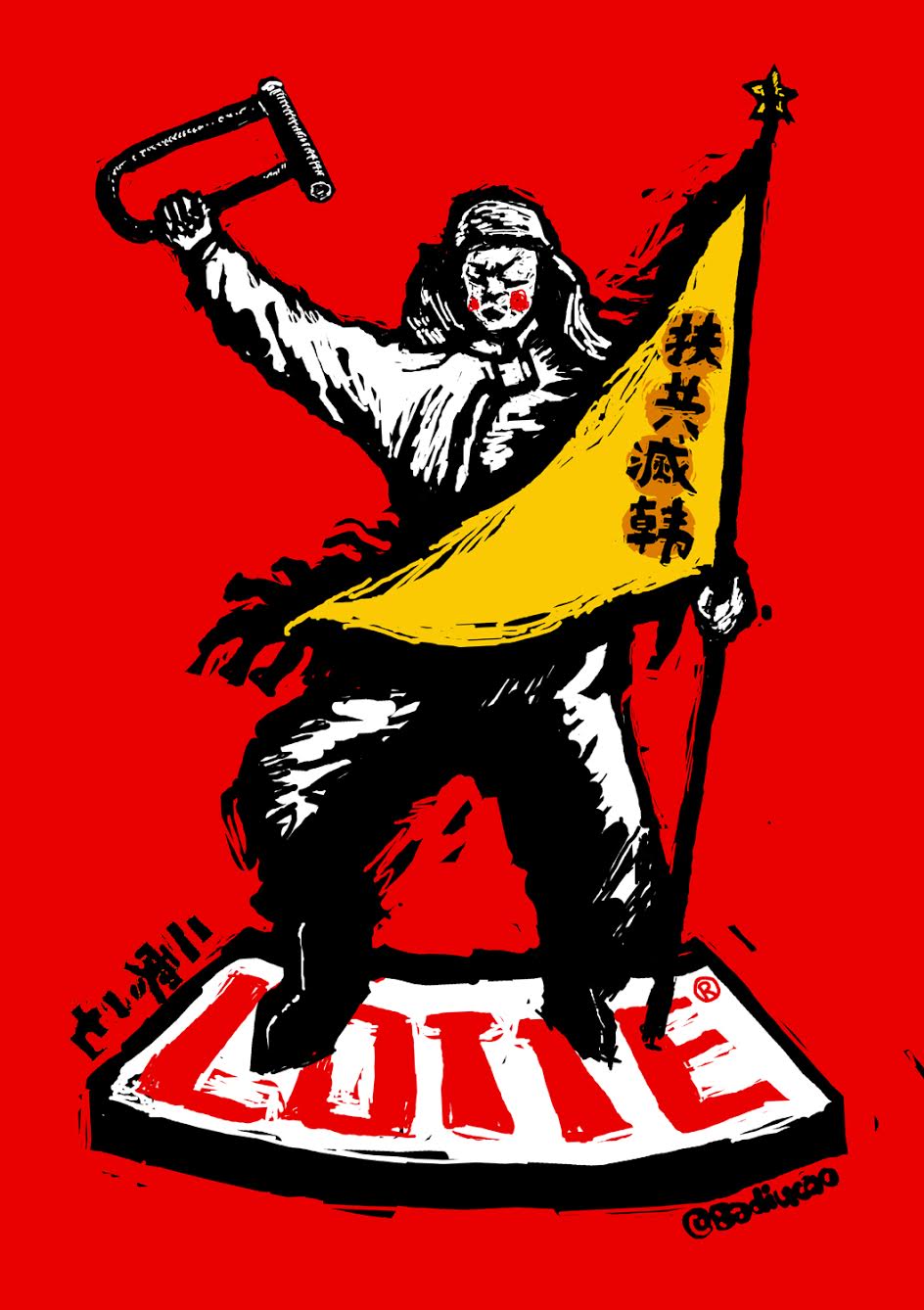 Following the United States’ deployment of an antimissile system in South Korea—which began yesterday after another missile test from North Korea—Beijing has expressed strong opposition towards both Washington and Seoul. The deployment of the Terminal High Altitude Area Defense (THAAD) system was agreed upon between the Obama and Park administrations last July, and Beijing quickly voiced concern that the system could use its surveillance capabilities against China in the event of military conflict between the two superpowers. The New York Times’ Camilla Schick and Robin Lindsay provide a video report on Beijing’s official response to the deployment:

The New York Times’ Gerry Mullany and Michael R. Gordon further report on Beijing’s anger, noting that state media had encouraged boycotts and street protest against South Korean conglomerate Lotte, who had agreed to give up land for the THAAD storage facility:

Yang Xiyu, a former senior Chinese official who once oversaw talks with North Korea, said China was worried that the deployment of the system would open the door to a broader American network of antimissile systems in the region, possibly in places like Japan and the Philippines, to counter a growing Chinese military.

“China can see benefits only for a U.S. regional plan, not for South Korea’s national security interest,” he said.

The state media recently encouraged Chinese citizens to boycott South Korean products and companies over the Thaad issue. The Chinese authorities recently forced the closing of 23 stores owned by Lotte, a South Korean conglomerate that agreed to turn over land that it owned for use in the Thaad deployment. Hundreds of Chinese protested at Lotte stores over the weekend, some holding banners that read, “Get out of China.” [Source]

Following Lotte’s announcement of the land deal late last month, The Global Times reported on netizen anger coming from China, and other Chinese companies’ efforts to hit the Korean conglomerate:

As of Tuesday, the latest post on Lotte duty free store’s official weibo account had received more than 20,000 comments, almost all of which called for a boycott against the South Korea brand. “China did not welcome you, please get the hell out of here and go back home,” a commenter named JUSTGO wrote. The comment received 533 likes.

“It’s a very simple logic…Lotte is making lucrative profit from Chinese consumers yet they are standing against us and supporting the South Korean government. In other words, the group is actually using our money to put us in danger. How can Chinese tolerate that? Another Weibo users named Ranlins said.

A topic entitled “Lotte to provide land for THAAD” on Weibohas been read 8.56 million times, where popular items under the brand as well as the location of theLotte Mart supermarket in China have been listed so Chinese can stay away from them.

Some Chinese companies are also joining the boycott. Domestic e-commerce giant JD.com, which announced a strategic partnership with Lotte.com in September 2015,postponed the opening of its Lotte Mart online store on Tuesday morning. [Source]

For more on the government’s cultivation of nationalistic online protest, and impatience with it among some Chinese, see previous coverage via CDT.

“With the government’s failure in diplomacy, it incites people to protest. The intention is similar to the Boxer Rebellion during the Qing Dynasty. Now there is a centralized authority which hand outs internal notices to all government and party branches, asking members of the youth league to participate in anti-Korea and anti-Lotte protests. Lotte is a Korean corporation and it has to serve the country’s interest. You can’t change its nature. The protest will only do harm to Lotte’s Chinese partner.”

[…] “Follow the call and boycott this and that. Follow the call and crush a few Korean vehicles. All these actions only make our enemy happy. The enemy hasn’t launched the attack and we are attacking our own people. The vehicles you crushed belong to your people, right?” [Source]

CDT resident cartoonist Badiucao also saw a comparison to be made between the anti-Lotte protests and the anti-imperialist, nationalist Boxer Rebellion of 1899. The Boxer-inspired protester below is carrying a banner that reads “Support the Party, Extinguish Korea”: Bloomberg notes that Lotte Shopping Co. shares have fallen 8.4 percent since the land deal was announced, and also reports on further efforts by Beijing to exert economic pressure by discouraging Chinese tourism to South Korea. From Bruce Einhorn, Sohee Kim, and Kyunghee Park:

[…B]efore South Korea decided to host the U.S.’ Thaad missile-defense system [, Chinese tourists made up 85 percent of foreign visitors to the resort island of Jeju]. China views the deployment as a security threat and is discouraging tourists from taking Korean vacations.

“We’ve seen about a 20 percent decline in Chinese tourists so far this year,” said Byun Chang-sik, a general manager at the Jeju Teddy Bear Museum, where the stuffed animals strike poses resembling The Beatles and Mona Lisa. “There’s nothing we can fix on our own.”

A more recent report from the Global Times on the continuation of  “China’s cultural cold war” against South Korea notes that popular Korean dramas have been pulled from Chinese streaming sites, while Chinese adaptations of Korean shows are attempting to distance themselves from the originals:

“I’m bored. I don’t know what to do with myself,” avid TV fan Stephanie Shi told the Global Times. Before last week, watching Korean TV series was a major part of her daily routine.

Changes haven’t just been limited to the removal of South Korea programming. Chinese TV programs adapted from South Korean shows have also undergone some changes to distance themselves from their South Korean sister shows.

These changes are just a part of China’s informal sanctions against South Korea, along with Chinese travel agencies suspension of travel packages to South Korea and Chinese citizens boycotting South Korea’s Lotte conglomerate, the company that agreed to provide land for the deployment of  THAAD. [Source]

While South Korea considers filing a formal WTO complaint against China for violation of trade deals, an op-ed from English-language paper The Korea Times asks Beijing to “grow up,” attempting to situate the government-fed anti-Korea sentiment into the history of Chinese nationalism and incompetence:

China often acts like a spoiled child, doing whatever it takes to get what it wants.

[…] This state-sponsored backlash against a chosen target is typical for China.

During the Cultural Revolution, Mao Zedong marshaled hundreds of thousands of “Red Guards” to weed out his political rivals and get the nation back under his control. Millions of Chinese died, the entire nation turned into re-education gulags and society was upended.

Toward the end of Qing Dynasty at the start of the 20th century, rebellious Boxers arose, encouraged by Empress Dowager Cixi. Foreigners were trapped in Beijing under siege by the Boxers and the Chinese imperial army for 55 days. The city was “liberated” by foreign expeditionary forces, signaling the end of the last Chinese dynasty and bringing foreign imperial powers in to take pieces of the Middle Kingdom.

What these two historic events and the latest Korean bashing have in common are the presence of incompetent leaders that pander to the population’s nationalistic sentiments. [Source]

The spat comes as South Korea is mired in political uncertainty, with suspended President Park Geun-hye awaiting a decision regarding her impeachment over a Samsung bribery conspiracy. The THAAD system is controversial in South Korea: thousands in the rural region where the system is being deployed protested against it in July, and Moon Jae-in, the candidate set to be the front-runner in the likely presidential replacement election, earlier expressed concern that THAAD deployment could harm relations with China and Russia.

Meanwhile, with U.S. Secretary of State Rex Tillerson set to have talks with President Xi next week, The Washington Post’s Emily Rauhala reports that the THAAD deployment could push Beijing to adopt a harder line towards the Trump administration:

China’s foreign ministry did not specify any actions against the United States Tuesday, but Beijing’s displeasure over the antimissile system marked an abrupt change in tone after a generally cautious approach until now toward the new American president.

Though some Chinese initially welcomed the idea of a Trump presidency, convinced a seasoned businessman would take a practical approach to politics, Trump’s early moves on Taiwan spooked Beijing.

Since the inauguration, Chinese officials have taken a careful approach, playing up the positive and downplaying areas of disagreement, including Trump administration comments on the South China Sea. That is, until Geng’s statement on Tuesday.

Plans to deploy the THAAD system, which predates the Trump presidency, have long been a source of tension between Seoul and Beijing.  [Source]

Rauhala also notes the contradiction between Beijing’s politically motivated attacks against Korean businesses and Xi Jinping’s stated willingness to take up the role of free trade and globalization cheerleader amid the global order uncertainty of Trump’s election.

At Bloomberg, David Tweed reports on how the mounting tensions between the Koreas and China are raising Trump’s geopolitical stakes in Asia:

While Trump initially signaled he’d be open to talks [with Pyongyang], more recently he’s indicated he could follow Barack Obama’s lead in insisting North Korea abandon its nuclear program before negotiations can occur.

The stakes for Trump are potentially higher than Obama, given Pyongyang’s progress in developing an intercontinental missile capable of hitting the U.S. with a nuclear warhead. The recent events are probably Kim’s way — after a hiatus in his provocations — to try and force Trump to the table with concessions, analysts said.

[…] “Efforts over the past eight years to slow the North down and prevent it from achieving this goal, relying on a mix of puny sticks and carrots plus otherwise trying to ignore the problem, have been unsuccessful,” Joel Wit, a former state department official who met North Korean diplomats in Geneva, wrote in The Atlantic in November after the meeting.

Yet at the start of the year, Trump signaled he’d revert to Obama’s policy. He vowed to prevent Pyongyang from developing the capability to strike the U.S. with a missile — without saying how — and harangued China for not doing enough to deal with North Korea. [Source]

For more geopolitical analysis of the THAAD standoff, see Q&As from Bloomberg and The Washington Post.