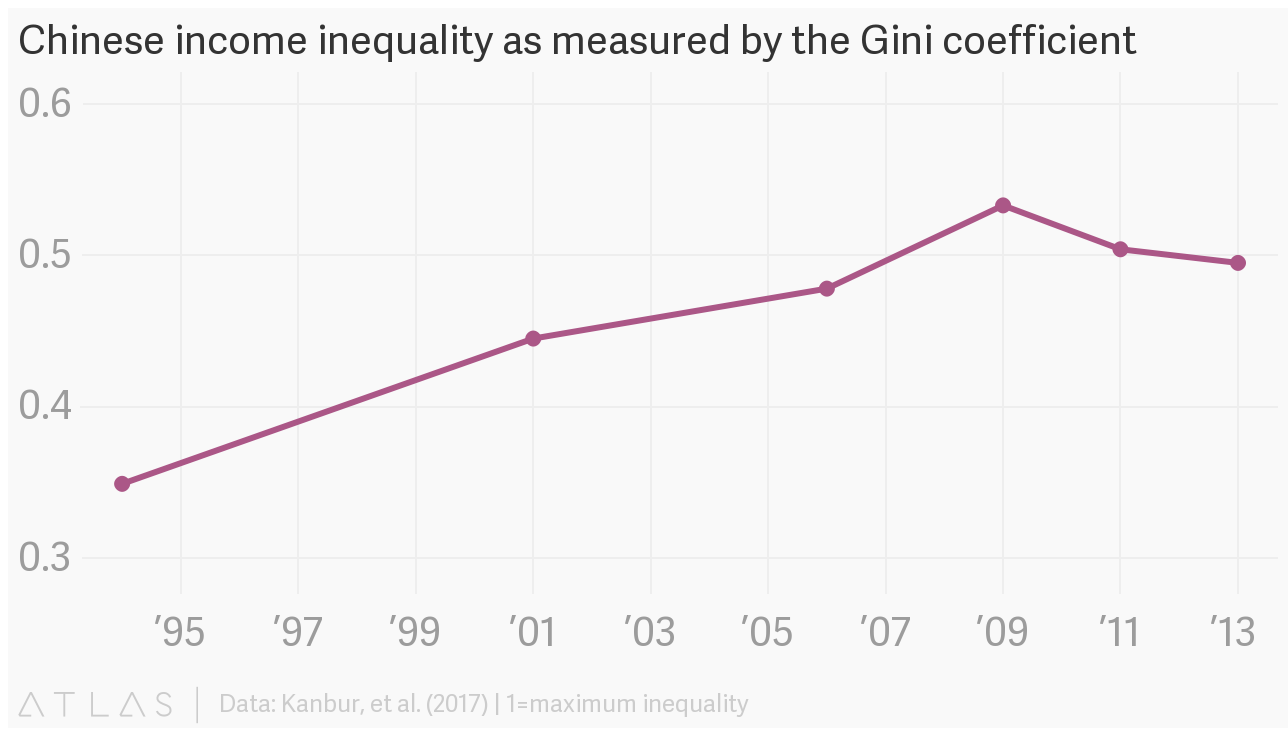 At Bloomberg Businessweek, Dexter Roberts reports on economist Gan Li, his study of and concerns about inequality in China, and his “mission to depoliticize statistics.” Gan conducts a biennial survey on household finances across the country, and begins work on the next edition in July.

The now much anticipated project almost suffered a premature death in 2012 after it exposed how Chinese society had become one of the most unequal in the world. Gan’s survey showed that China’s Gini coefficient, a measure of income inequality, had reached 0.61, well above the 0.4 level widely considered destabilizing by economists. The top 1 percent held more than one-quarter of China’s wealth, while 430 million Chinese struggled day-to-day.

Less than 24 hours after Gan released the news, six cadres from the National Bureau of Statistics descended on his Survey and Research Center for China Household Finance. They demanded the data. The economist wondered whether he’d be shut down. His fears proved unfounded: “They found no errors,” he says. “A few days later, someone told me we should be OK.”

[…] After his run-in with the authorities in 2012, Gan hasn’t released an updated Gini coefficient, but he still sees income inequality as the biggest obstacle to China’s development. Even as the country has built up new social welfare programs, including a monthly subsidy for the poorest, household consumption has not grown much, because most Chinese still have no extra money to spend: The nation’s high savings rate is produced by the wealthy few. Gan wants more redistribution of income from the rich to the poor through property and inheritance taxes, neither of which exist in China. “What he found fundamentally changes the way we think about China’s economy,” says Tom Orlik, chief Asia economist at Bloomberg Intelligence. “China doesn’t face the challenge of building a welfare state but ensuring more equal distribution of wealth and income, which is much harder.”

Many share Gan’s concerns about inequality. But according to Ravi Kanbur, Yue Wang, and Xiaobo Zhang at Cornell and Peking Universities, China’s income inequality, though still severe, has actually declined since its peak in 2010. From Dan Kopf at Quartz:

This is the chart of Simon Kuznets’ dreams. Kuznets, a mid-20th century economist, famously hypothesized that for industrializing countries, income inequality would at first rise, but eventually begin to fall as the population got richer. It rises because the rural workers who migrate to cities make more money than those they left behind—urban work is more productive than rural work, and thus there is more demand for workers in cities than the supply in the early stages of industrialization. However, eventually, inequality starts to fall as a large proportion of people receive relatively high city wages. At the same time, rural workers also start to get paid more as fewer workers remain in the countryside, reducing the supply of labor and improving workers’ bargaining power.

The Cornell and Peking economists think Kuznets’ vision is a good description of what has actually happened in China. They also think that government interventions, such as minimum-wage regulations and increases in the social welfare state, likely contributed to the fall in income inequality. [Source]

The Economist also reported on these trends last year.

As for public attitudes toward the gap, Sixth Tone highlighted a 2013 Renmin University survey’s finding that nearly three quarters of Chinese saw the country’s income inequality as “unreasonable,” though only 30% said that it was also “unacceptable.” In 2013, Harvard’s Martin King Whyte suggested at Foreign Affairs that “China needs justice, not equality”: that unequal distribution of political power is a greater problem than that of wealth. He argued that potential anger at wealth inequality had been largely defused by satisfaction with absolute gains in prosperity and the prospect of more to come.

At The Washington Post, Simon Denyer reports on research indicating that enormous income gains between 1990 and 2005 were accompanied by a marked decline in happiness, with prosperity more than offset by rising insecurity. Spirits have since rebounded, but may still not have reached their former level.

The first major implication of the findings is that China’s Communist Party has weathered the storm. It has navigated through the most disruptive period of economic turbulence without losing power: thanks in part, of course, to a ruthless system of state repression.

But its ability to keep economic growth on track has also begun to reap benefits. The past decade has seen happiness levels begin to rise again, as continued economic growth has helped to bring down unemployment and given the government enough revenues to begin to rebuild the social safety net.

[…] Some external pundits argue that the current slowdown in China’s economic growth could cause upheaval and unrest, but Wang said his findings show this should not be a big concern.

[…] What matters most to people is income security, family life, and the health of oneself and one’s family, the report notes. When people are asked open-ended questions about what is important to their happiness, “broad societal matters such as inequality, pollution, political and civil liberties, international relations,” – issues which most individuals have little ability to influence – are rarely mentioned. [Source]