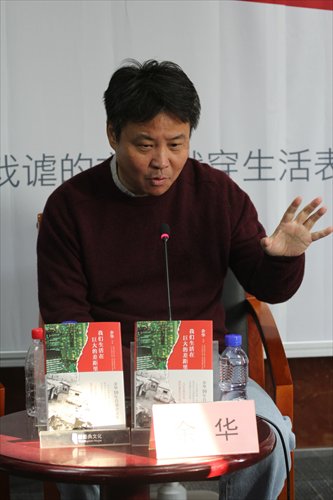 Compared with the differences brought about by time, Yu seems more worried about the economic gap and imbalances between different areas of the country that have cropped up amid the past three decades of rapid economic development.

“In late 1990s, CCTV interviewed kids nationwide around Children’s Day, asking what they wanted most as their gift for the day. A boy from Beijing said he wanted a real Boeing aircraft instead of a toy one and a girl from Northwest China said she wanted a pair of white sports shoes… It is appalling to see the huge gap between the dreams of two Chinese kids’ of the same age,” Yu wrote.

He wrote about the huge gap between the past and present in his novel Brothers, while in The Seventh Day, with an absurd touch, he illustrates the economic gap that exists between Chinese that live in the same era. In his essay, he could not make his point clearer, “This historical gap allows a Chinese to experience in 40 years the drastic changes that could take 400 years for Europe to witness, while the economic gap makes Chinese people of the same time live as if they were in different eras.”

[…] “This is our life. We live in huge historic and materialistic gaps. We live between these two extremes all the time… We are all sick. Since I too am sick, it’s more accurate to say I’m seeking a cure rather than just telling stories through writing,” he writes in We Live in a Huge Gap, pointing out that the increasing economic gap has led to psychological imbalances in many people. [Source]

Last month, an IMF working paper ranked China among the world’s most unequal countries. Read more about Yu Hua and income inequality in China, via CDT.