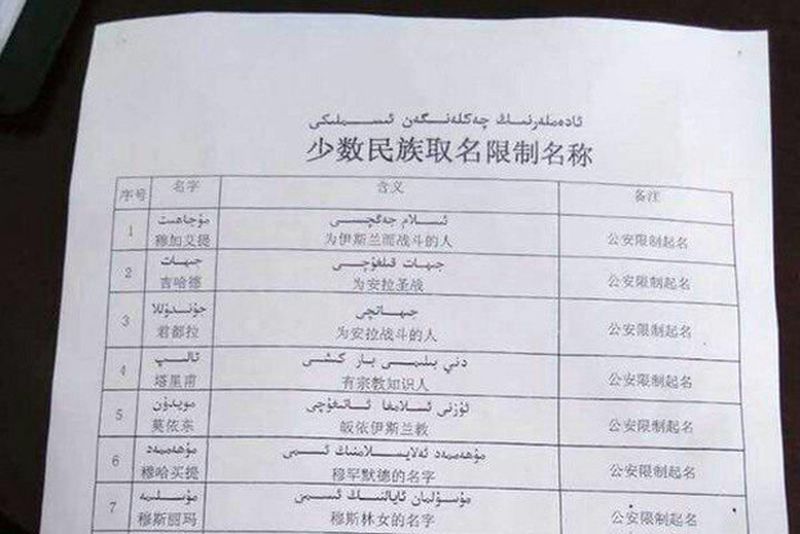 In the latest of a series of recent regulations aimed at combatting “religious extremism” in Xinjiang, regional authorities have reportedly released a list of Islamic names new parents would be prohibited from naming babies. The AP reports:

“Muhammad,” ”Jihad” and “Islam” are among at least 29 names now banned in the heavily Muslim region, according to a list distributed by overseas Uighur activists.

An official at a county-level public security office in Kashgar, a hub in southern Xinjiang with strong Islamic influences, says some names were banned because they had a “religious background.” It is unclear how widespread the ban is or whether it is tightly enforced. The official refused to identify herself, as is common with Chinese officials.

At Radio Free Asia, Xin Lin reports on information about the ban and its enforcement, gathered from an employee at an Urumqi police station:

An employee who answered the phone at a police station in the regional capital Urumqi confirmed that “overly religious” names are banned, and that any babies registered with such names would be barred from the “hukou” household registration system that gives access to health care and education.

“You’re not allowed to give names with a strong religious flavor, such as Jihad or names like that,’ the official said. “The most important thing here is the connotations of the name … [it mustn’t have] connotations of holy war or of splittism [Xinjiang independence].”

Asked if names of Islamic scholars were acceptable, the employee replied: “Get him to change it; it’s the sort of thing that [could be regarded as] promoting terror and evil cults.”

“Just stick to the party line, and you’ll be fine,” he said. “[People with banned names] won’t be able to get a household registration, so they will find out from the hukou office when the time comes.”

“They have received training in this sort of thing over here [in Xinjiang] so they’re the experts [on what is allowed],” he said. [Source]

The reported list of banned baby names comes amid a nationwide crackdown on terrorism launched in 2014 in response to increasing incidents of violence in Xinjiang and elsewhere in China. Last month, rules against “extremist behavior,” including wearing Islamic face veils or long beards, were released—the first region-wide ban, which came after some localities had enacted similar rules.

“China’s policies are increasingly hostile,” said Dilxat Raxit, a spokesman for the World Uyghur Congress, a group in Munich that advocates self-determination for Xinjiang. “Uighur people have to be cautious if they want to give their children names they are happy with, and at the same time avoid punishment from the government.” [Source]

While Uyghurs in Xinjiang traditionally observe a moderate form of Sunni Islam, in recent years conservative practices have increased, which some interpret as a subversive response to increasing state regulations on religious observance.

According to media reports, Xinjiang authorities have recently banned dozens of names with religious connotations common to Muslims around the world, such as Saddam and Medina, on the basis that they could “exaggerate religious fervor.” Children with banned names will not be able to obtain a “hukou,” or household registration, essential for accessing public school and other social services.

This is just the latest in a slew of new regulations restricting religious freedom in the name of countering “religious extremism.” On April 1, Xinjiang authorities imposed new rules prohibiting the wearing of “abnormal” beards or veils in public places, and imposing punishments for refusing to watch state TV or radio programs. These policies are blatant violations of domestic and international protections on the rights to freedom of belief and expression.

[…] Violent incidents and ethnic tensions in Xinjiang have been on the rise in recent years, but the government’s farcically repressive policies and punishments are hardly solutions. Instead, they are only going to deepen resentment among Uyghurs. If the government is serious about bringing stability and harmony to the region as it claims, it should roll back – not double down on – repressive policies. [Source]

The ongoing crackdown has also recently included massive military rallies, increased surveillance measures, and the punishment of officials for not substantially enforcing rules. One Uyghur official in Hotan was reportedly demoted this month for “not daring” to smoke in front of religious elders. Other Uyghur Party officials in Xinjiang have published commentaries in state media admonishing  fellow Uyghur cadres for their failings, and calling on them to reveal “two-faced people” and “clean them out.” At Reuters, Christian Shepherd reports on a more recent Xinjiang state media article from Uyghur officials appealing to the patriotism of Uyghur youth:

Four senior Uighur officials, writing in a front-page article in the official Xinjiang Daily newspaper, asked young people to reflect on why Uighurs are labeled “terrorists”.

“A small group of devils create violence and terror in order to split the motherland and destroy ethnic unity,” they said.

“Because of this, we regularly face round-upon-round of safety checks, sometimes we finding it hard to stay in hotels or to rent housing.”

Young Uighurs should reflect on how the party had created a “harmonious, prosperous, happy and safe” life for minorities in Xinjiang, they said, adding that a failure to grasp the nation’s common language of Mandarin was a “disgrace”.

“Siblings, the great motherland has granted us a blessed, heavenly life, how can we follow those devils to abandon our motherland?” they said. [Source]

For more on the ongoing crackdown on terrorism and continuing ethnic and political tensions in Xinjiang, see “The Wild West of the Far East: Uyghurs in Xinjiang” from Perry Arrasmith at the Harvard Political Review, or read prior coverage via CDT.