Military Rallies in Xinjiang Ahead of Top Party Meetings 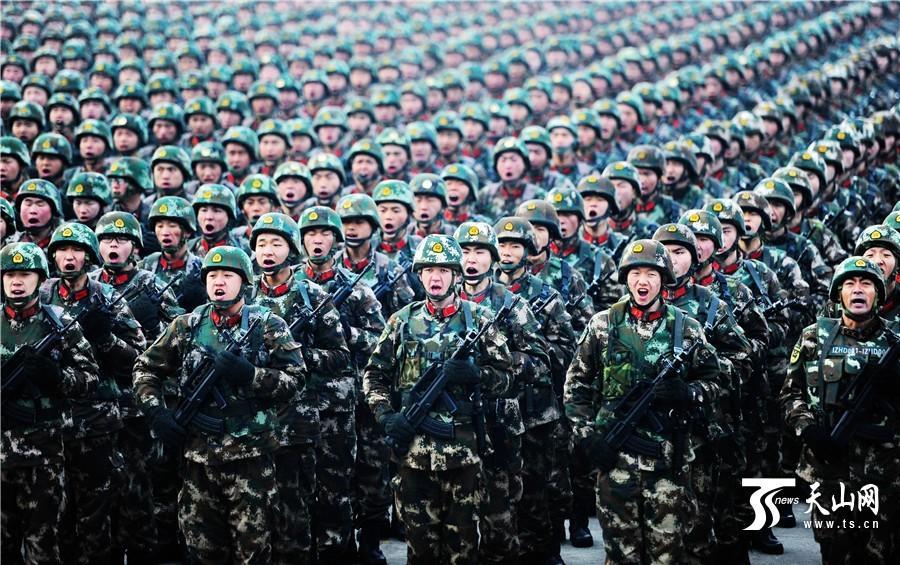 Following a deadly knife attack in Pishan county, Xinjiang on February 14 and amid an ongoing “people’s war on terrorism,” authorities last week announced new security measures, and oversaw police rallies showcasing the might of the People’s Armed Police in several regions of Xinjiang. At Reuters, Michael Martina reports on a massive rally staged on Monday in Urumqi, where over 10,000 armed police officers were in attendance and a new rapid-response air patrol system was on display:

At an Urumqi airport later that day, Chen dispatched 1,500 armed police to the “frontlines” in the Xinjiang cities of Hotan, Kashgar and Aksu.

Those cities, which have seen their own mass rallies in recent weeks, are part of the region’s southern Uighur heartland, where recent violence has flared. Three knife-wielding attackers killed five people and injured five others before being shot dead in Hotan this month.

People’s Armed Police (PAP) and military helicopters, as well as 10 civilian aircraft, carried the forces as part of an “all new” air-land mechanism that would bring high-speed armed helicopter patrols anywhere over Xinjiang’s vast and rugged territory, a notice posted to the Ministry of Defence’s website said. It did not give further details on the patrols. […] [Source]

The massive and widely publicized rallies come during an especially sensitive political time: ahead of annual top political meetings in Beijing beginning later this week, and before the 19th Party Congress later this year. The Guardian’s Tom Phillips reports further on the massive anti-terror rallies in Urumqi and other parts of southern Xinjiang. Phillips notes state-run media cheering on the displays of force, and quotes Xinjiang expert James Leibold on their scale and timing:

“It’s safe to say that we haven’t seen this level of public sabre-rattling since the aftermath of the 2009 riots [see prior coverage of the riots, via CDT].

“The two recent attacks were small, minor incidents involving unsophisticated ‘cold weapons’ – knives – that seem to indicate little planning and coordination. There might be something going on behind the scenes in terms of the security situation in Xinjiang but I suspect it’s more a case of political posturing.”

[…] Leibold said he sensed Xinjiang’s party chief was staging the rallies, which have not been widely reported in China’s English-language press, for a domestic audience.

“Not only for the residents of Xinjiang – Han and Uighur alike – but also for the political bosses back in Beijing. It’s a form of political theatre of the highest order [that says]: the party is in firm control in Xinjiang and those who seek to resist will be crushed.” [Source]

Plane loads of troops being deployed to the 'frontline' of China's 'people's war on terror' in southern Xinjiang pic.twitter.com/6uz4fygE0d

Either a Xinjiang army drill or Rogue One outtake pic.twitter.com/8r7I3uRBcY

More official images of the rallies can be seen via state media web portals.

Amid the continuing “war on terror, ” Xinjiang’s relatively tight media and internet controls have been further fastened. Ongoing government directives against independent reporting on violence in the region means incidents often go uncovered in China, or are otherwise covered only by Chinese state media or foreign-funded organizations and advocacy groups.

At Human Rights Watch, Maya Wang reports that one Chinese news portal defied censorship directives to shut down reader comments on news of the most recently publicized attack in Pishan county on February 14. The archived comments reveal a nationalistic bigotry that Wang sees as both a product of Xinjiang propaganda and censorship policies, and an obstacle to the goals of those policies:

Although authorities had given no such information, netizens immediately jumped to the conclusion that the incident, which took place in the region home to 10 million ethnic Uyghur Muslims, was a terrorist attack by Islamists, and the victims were ethnic Han Chinese. Most remarks were virulent and derogatory, equating Islam with terrorism, calling it an “evil cult” and Muslims “dogs” and “leeches.” Muslims who sought to distinguish Islam from terrorism were dismissed as “whitewashers” by commenters.

Many netizens lamented the authorities’ “preferential treatment towards minorities,” and complained that government censorship is unfairly protecting Muslims. A number called for collective punishment: “Families of terrorists should all be killed!” wrote one, while another advocated for the eradication of “the entire [Uyghur] ethnic group.” Calls on the Jiangnan platform to demolish all mosques seemed mild in comparison.

[…] The Chinese government has long justified censorship in minority areas as a measure to maintain “ethnic harmony.” But ironically, this censorship fuels bigotry and ignorance – heightening already-strained ethnic relations. [Source]

Violence in Xinjiang has been blamed by authorities on radical Islamist militants with alleged ties to the global jihad movement. The official terror crackdown has been criticized by rights groups for including policies regulating the religious and cultural practices of the predominately Muslim Uyghur ethnic minority. While Islam has so far been the primary religious target of official suspicion in Xinjiang, Radio Free Asia reports on a directive appearing to target other religious and missionary practices across Xinjiang:

After officials confirmed a generalized ban on unofficial Christian churches last week, RFA has obtained a document believed to originate from the Xinjiang Uyghur Autonomous Region religious and minority affairs department that details a very specific list of 26 types of banned religious activities.

[…] The list singles out attempts to proselytize or carry out missionary work “in the guise of” poverty and disaster relief, tourism and academic and cultural exchanges, according to a copy of the document shown to RFA.

[…] Under the new rules, no religious group is permitted to carry out any religious activities including preaching, missionary work, proselytizing of new believers and ordaining clergy without prior government approval.

[…] “Missionary activities by groups or individuals from overseas under the guise of business, tourism, lectures, overseas study, cultural exchange or donations to disaster relief or to fund studies or alleviate poverty and sickness,” are also prohibited by the document. […] [Source]