Bird of the Week: Thorn Bird 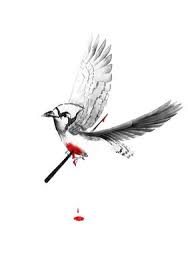 A self-applied nickname used by Guo Wengui, an exiled billionaire with known ties to China’s intelligence agency, to describe his expected destiny as a martyr. Draws inspiration from the 1977 novel “The Thorn Birds” by Australian author Colleen McCullough.

The title of McCullough’s best-selling 1977 novel, as she explains in the book, comes from the Celtic legend of the thorn bird, a mythological bird which sings just once in its life, immediately preceding its death. In the book, McCullough describes the tale: “There is a legend about a bird which sings just once in its life, more sweetly than any other creature on the face of the earth. From the moment it leaves the nest it searches for a thorn tree, and does not rest until it has found one. Then, singing among the savage branches, it impales itself upon the longest, sharpest spine. And, dying, it rises above its own agony to out carol the lark and the nightingale. One superlative song, existence the price. But the whole world stills to listen, and God in His heaven smiles. For the best is only bought at the cost of great pain.”

Guo likens his own recent activities exposing alleged corruption among top Party leaders to the thorn bird’s mythological life cycle. By Guo’s account, he is laying out his “song” for the “whole world to still and listen,”at the cost of becoming one of China’s most wanted fugitives.

In a September 4 tweet, Guo’s Twitter follower @henry_chen81 asked him, “Can currying favor with the emperor bring you pardon?” (讨好皇帝能被赦免吗?) This was a reference to Guo’s repeated insistence that he is not seeking the fall of President Xi Jinping, a key element of “Guo’s Seven Articles,” one of which asserts that Guo is “not opposed to Chairman Xi” (不反习主席). Guo replied with a tweet:

If you believe Wengui is so ignorant, silly, and naive, then you totally misunderstand me! Wengui’s [my] ending has long been foreordained, even the heavens can’t change that! Only if “Guo’s Seven Articles” are carried forward and acknowledged can I regard my mission as complete! No matter what, my ending is the same as the Australian thorn bird’s fate! I only care about the results of the three-year exposé! And the return of our lawful assets. That’s fair. That’s honor! I rely only on myself, and expect nothing from anyone else. Likewise, others cannot stop me! [Chinese]

Guo has not always struck such a fatalistic tone, saying in earlier statements that he was aiming to “save his life, save his money, and gain revenge” (保命保钱报仇).

Other of Guo’s Twitter followers replied after he described himself as a thorn bird:

Thorn bird! No, you’ll be reborn as a phoenix!!! [Chinese]

We don’t want Guo Wengui to become a thorn bird, we want him to lead the Chinese people toward democracy, freedom, equality, and a nation of law. [Chinese]

Guo-follower @Gsa7PvldTpZ6r9G reimagined McCullough’s description of the thorn bird myth in the context of Guo Wengui:

Australia has a type of thorn bird who spends its whole life searching for a thorn tree. Once it finds the tree, it impales itself on the longest, sharpest spine, and before dying calls out one of nature’s most moving songs. This is his predestination, and all those who love him cannot alter it. China has a similar type of man, and just like the thorn bird he sings a poignant song, rousing the dormant from their dark sleep one by one and bringing life to dead souls. He will be reborn in Nirvana, flying over that high wall… [Chinese]

See also All of this is only the beginning!.