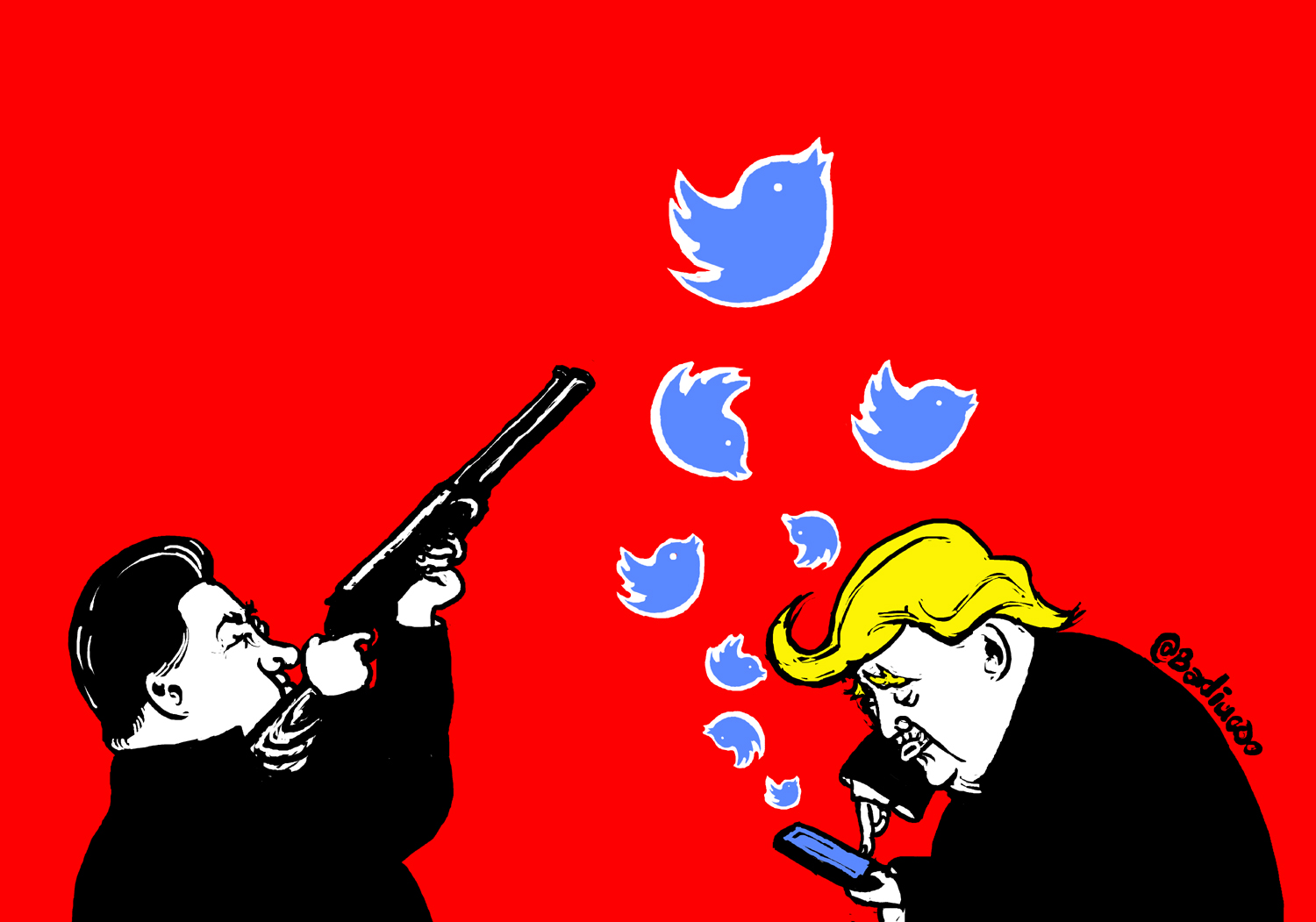 As President Trump travels to China on his “state visit-plus,” some are wondering if and how he will be able to maintain his prolific Twitter habits, when the site is blocked in China. CDT cartoonist Badiucao depicts President Xi taking aim at Trump’s tweets, while assuring him, “It’s not personal.” 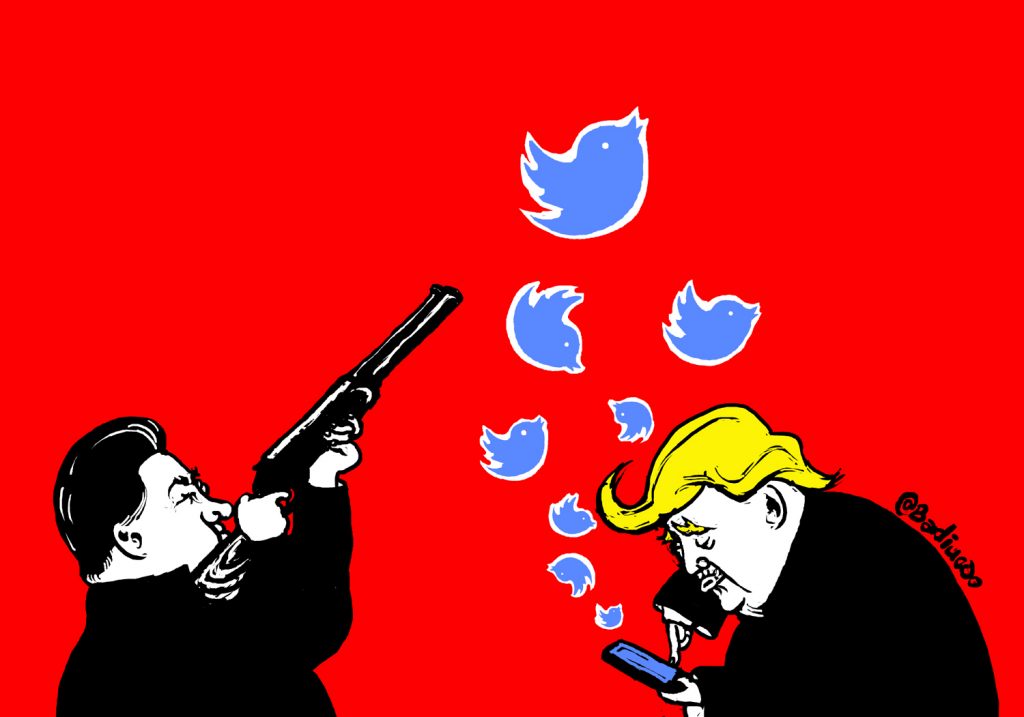 These "Is Trump able to tweet from China?" questions are depressing. Little understanding of circumvention and how Chinese censorship works.

Aaron Mak reports for Slate that Chinese officials have assured the public that Trump will be able to tweet at will from inside the Great Firewall:

China, the next stop on his trip, is notorious for its Great Firewall that blocks many major websites, including Facebook, YouTube, and, yes, Twitter. That raised an unlikely but tantalizing possibility for the 68 percent of Americans who, according to an ABC/Washington Post poll, find the president’s tweets “inappropriate,” the 65 percent who find them “insulting,” and the 52 percent who find them “dangerous.”

However, several anonymous officials told the Associated Press that Trump will be able to satisfy his Twitter habit in China despite the restrictions, and Chinese Vice Minister of Foreign Affairs Zheng Zeguang assured reporters on Friday that they “should have no reservations about Mr. President’s ability to keep in touch with the outside.”

[…] It’s unclear what exactly Trump’s workaround will be. Neither the AP’s sources nor White House itself is willing to divulge the details. Yet Quartz notes that the president will likely use sophisticated satellite links and government-issued phones to both access Twitter and ward off hackers that lurk in China’s cellular networks. [Source]

While China’s massive censorship machine technically blocks Chinese citizens from using Twitter, there are ways around it—especially for foreigners. First of all, foreigners can sometimes access Twitter and other blocked social networks within China, just by using international hotel chains’ Wifi or because they’re roaming on a Chinese telecom network, rather than permanently registered on it.

[…] And, of course, as the US president, Trump is likely to have his own channel to access Twitter. Top US government officials traveling in China rely on satellite links and secure government-issued phones, set up by the White House Communications Agency (WHCA). Air Force One, the presidential plane Trump will travel on, has satellite hookups, secure internet connections, and 85 phone lines.

“We can all agree that if some feather-ruffling domestic issue arises while Trump is in China, he’d likely be on Twitter in the time that it takes to drink a cup of tea,” Charlie Smith, a co-founder of Greatfire, which fights against Chinese censorship. [Source]

Amnesty International listed four things that Trump will likely not tweet about from China, including China’s forcible return of North Korean refugees, fake news, China’s treatment of Uyghurs, and political prisoners and dissidents including Liu Xia. Indeed, recent mentions of China on Trump’s Twitter account have been complimentary of Xi as he begins his second five-year term:

Getting ready to make a major speech to the National Assembly here in South Korea, then will be headed to China where I very much look forward to meeting with President Xi who is just off his great political victory.

While Trump will most likely have free rein of Twitter in China, Laurent Thomet and Joanna Chiu of AFP point out that use of social media sites is becoming increasingly risky for Chinese netizens:

While Trump will likely find ways around the firewall, Chinese people face increasingly stringent controls over what they can do, say and see on the internet.

Chinese internet users face three years in prison for writing defamatory messages that are re-posted 500 times under a law passed in 2013. Web users can be jailed if offending posts are viewed more than 5,000 times.

New rules policing content were imposed this year and several of the country’s biggest tech firms were fined for failing to remove illegal online content such as pornography and violence. [Source]

Most Chinese don't even know of a wider web with better information, and others depend on faltering VPNs for career and academic advancement, says @underbreath @CDT #TrumpinAsia https://t.co/Cf9YqeA7Lx

You can send support Badiucao by buying “Watching Big Brother: Political Cartoons by Badiucao,” available in EPUB and PDF formats. The book covers the early years of Xi’s presidency, from December 2013 to January 2016. No contribution is required, but all donations will go to Badiucao to support his artwork. CDT is also selling merchandise featuring Badiucao’s work in our Zazzle store. See also a Q&A with Badiucao in which he discusses his artistic and personal influences, and his earlier cartoons for CDT.