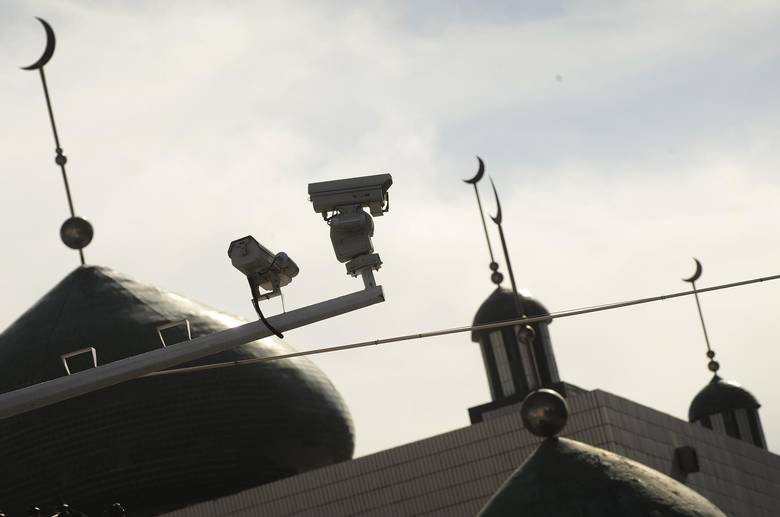 As Chinese authorities ramp up efforts to create an unprecedented digital police state in Xinjiang, citizens caught questioning government policies in the region are given unusually harsh punishments, such that even mild critics are now at risk of facing lengthy sentences. Zhang Haitao, who made online criticisms of the government’s treatment of Uyghur minorities in Xinjiang, was sentenced to 19 years in prison on charges of subversion and espionage. AP’s Gerry Shih reports:

“They wanted to make an example of him, to scare anyone who might question what they do in the name of security,” Zhang’s wife, Li Aijie, told The Associated Press earlier this week, one day after she arrived in the United States and asked for political asylum. “Even someone who knows nothing about law would know that his punishment made no sense.”

Elsewhere in China, Zhang would have been sentenced to no more than three years, said his lawyer, Li Dunyong, and may not have been prosecuted at all.

But Xinjiang, the tense northwestern region where most Uighurs live, has been enveloped in recent years in a vast dragnet of police surveillance , which authorities insist is needed to root out separatism and Islamic extremism. Zhang, who moved to Xinjiang from central Henan province more than a decade ago in search of work, wondered in his social media posts whether these policies were stoking resentment among Uighurs. He warned that China’s restrictions on the Uighurs’ religious practices risked sparking an insurgency.

[…] Court records say Zhang was convicted of sending 274 posts from 2010 to 2015 on Twitter and the Chinese social media service WeChat that “resisted, attacked and smeared” the Communist Party and its policies, earning him 15 years in prison for inciting subversion of state power. He was given another five years for talking to foreign reporters and providing photos of the intense police presence in the streets of Xinjiang. That, the court said, amounted to providing intelligence about China’s anti-terror efforts to foreign organizations. [Source]

Uyghur scholar Ilham Tohti was sentenced to life in prison in 2014 on charges of separatism despite his public opposition to independence for Xinjiang. The case has been viewed as a signal that the government is bent on eliminating the ideological middle ground with the intent of branding any attempt at dialogue as an act of subversion. In an interview Ian Johnson at The New York Review of Books, scholar Wang Lixiong remarks: “The only conclusion is dark: it’s that they don’t want moderate Uighurs. Because if you have moderate Uighurs, then why aren’t you talking to them? So they wanted to get rid of him and then you can say to the West that there are no moderates and we’re fighting terrorists.”

Ilham Tohti’s niece has recently been handed a harsh sentence, according to RFA:

RFA reports that #IlhamTohti’s niece, a 25-year-old nurse – was secretly sentenced to 10 years.

With the rise of predictive policing and the use of advanced technologies for social control, authorities in Xinjiang are increasingly intruding into the day-to-day lives of Uyghurs in ways that resemble North Korea and South African apartheid. From Nathan Vanderklippe at The Globe and Mail:

What is taking place in Xinjiang has little historical precedent in the extent of authorities’ command over people’s lives, according to two scholars who recently visited the area.

“It’s a mix of the North Korean aspiration for total control of thought and action, with the racialized implementation of apartheid South Africa and Chinese AI [artificial intelligence] and surveillance technology,” said Rian Thum, a historian at Loyola University in New Orleans. “It’s a truly remarkable situation, in a global sense.”

[…] David Brophy, a lecturer in Chinese history at the University of Sydney, was shocked on a recent visit to see barbed-wire fortifications around public buildings and parking-lot attendants equipped with bullet-proof jackets.

“Xinjiang very much feels like a military occupation now,” he said, albeit one with an ideological objective. “Every night on TV, there was a lot of footage of oath-swearing ceremonies,” in which people pledged to root out “two-faced people,” the label given to Uyghur Communist Party members not fully devoted to Chinese policy.

“It really gave the feel of a serious purge in process,” said Dr. Brophy […][Source]

The oppressive policies towards Uyghurs are driving a large number of them to take up arms with terrorist organizations in Syria in hopes of returning to China with combat skills to avenge ill treatment suffered under the CCP. Thousands of Uyghurs have traveled to Syria since 2013 to train as fighters. In a separate article as part of a series on Xinjiang, Gerry Shih at AP looks at how the government is creating grievances and breeding anger that have led to the radicalization of Uyghurs in what has become a self-fulfilling prophecy for the Chinese state.

“We didn’t care how the fighting went or who Assad was,” said Ali, who would only give his first name out of a fear of reprisals against his family back home. “We just wanted to learn how to use the weapons and then go back to China.”

[…R]are and extensive Associated Press interviews with nine Uighurs who had left China to train and fight in Syria showed that Uighurs don’t neatly fit the profile of foreign fighters answering the call of jihad.

[…] As the repression mounted, what began as a trickle of Uighurs fleeing China grew into a mass exodus. In 2013, more than 10,000 left across southern China’s porous borders, according to Uighur exiles. Nearly all the Uighurs who spoke to the AP after returning to Turkey from Syria recounted being persecuted by Chinese authorities as a motive for taking up arms.

“The Chinese government had been accusing Uighurs of militancy for a long time when there hasn’t been much of a threat,” said Sean R. Roberts, an expert on Uighur issues at George Washington University. “That changed after the 2009 crackdown. It’s become a self-fulfilling prophecy.” [Source]