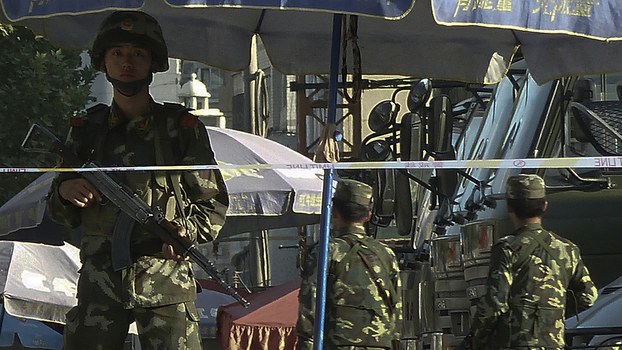 Mass disappearances are taking place in Xinjiang as part of an intensive effort spearheaded by Communist Party chief Chen Quanguo to create a digital police state in the region complete with data-driven surveillance targeting its Uyghur population. At Radio Free Asia, Shohret Hoshur reports that nearly ten percent of residents of one Xinjiang township have been detained by Chinese authorities and sent to re-eduction camps and jails over accusations of harboring “extremist” views, :

A former resident of Kashgar Kona Sheher (Shufu) county’s Bullaqsu township recently told RFA’s Uyghur Service in a letter that “a large number of people” have been arrested in the county this year, leaving some townships with “hardly any males to be seen.”

[…A]n official with the Bullaqsu Office of the Judiciary said there are currently more than 3,300 of the township’s 36,000 residents detained in either prison or re-education camps.

“According to the information I have, 2,514 [people are imprisoned] … but that information is a bit old and I do not have the latest statistics,” he said.

It had been around a month since the latest figures were released, he said, but 57 people had been imprisoned since then. Of those sentenced to jail, the longest term was 20 years, he added.

[…] Additionally, he said, 806 people from the township are currently held in re-education camps. [Source]

The ongoing crackdown has also targeted Uyghur students travelling abroad to Egypt and other countries for Islamic studies as authorities take steps to round up individuals from overseas who are suspected of committing alleged political crimes. Gerry Shih looks at the latest developments in and beyond Xinjiang to launch an exclusive AP reporting series on the security campaign in the region:

Along with the detention camps, unprecedented levels of police blanket Xinjiang’s streets. Cutting-edge digital surveillance systems track where Uighurs go, what they read, who they talk to and what they say. And under an opaque system that treats practically all Uighurs as potential terror suspects, Uighurs who contact family abroad risk questioning or detention.

[…] The government has referred to its detention program as “vocational training,” but its main purpose appears to be indoctrination. A memo published online by the Xinjiang human resources office described cities, including Korla, beginning “free, completely closed-off, militarized” training sessions in March that last anywhere from 3 months to 2 years.

[…] Chinese authorities had extended the scope of the program to Uighur students abroad. And Egypt, once a sanctuary for Uighurs to study Islam, began deporting scores of Uighurs to China. […] [Source]

Besides forced indoctrination and detentions, Shih notes that a growing tactic of repression involves invisible predictive policing that makes use of advanced technologies including facial recognition systems and other biometric tracking and movement monitoring devices. Beginning this year, Xinjiang authorities have implemented mandatory health checks to collect DNA samples and other biometric data of residents in several regions in Xinjiang.

These developments are part of an ongoing nationwide “war on terror” that was launched in 2014 in response to a series of violent incidents in Xinjiang and elsewhere in China. While authorities have attributed the violence to Uyghur separatists and religious extremists, critics argue that the state’s repressive policies in the region are the root cause of unrest. In April, officials banned parents from naming their newborns Jihad, Imam, Medina and Mohammed, among other Muslim names with religious overtones. New legislation was also passed in March prohibiting “abnormal” beards and the wearing of veils in public places. Cash reward systems for information on illegal religious and separatist activities have been set up in the region to incentivize whistler blowers.