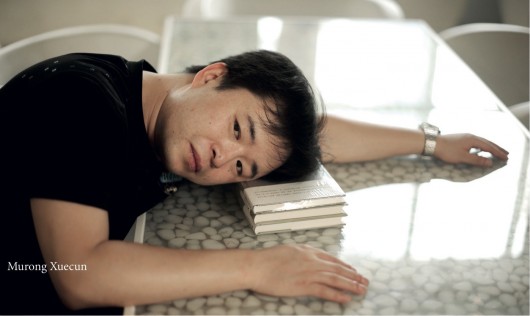 Genuine bravery for a writer […] is about calmly speaking the truth when everyone else is silenced, when the truth cannot be expressed. It is about speaking out with a different voice, risking the wrath of the state and offending everyone, for the sake of the truth, and the writer’s conscience.

—Murong Xuecun, “Words We Can Use, and Those We Can Not“

Murong Xuecun is the pen name of writer and anti-censorship activist Hao Qun (郝群). Originally an internet novelist, he has become one of the most prominent China-based critics of Beijing’s censorship regime.

Born in 1974 in rural Jilin, Murong began writing fiction in 2001. In 2002, he started posting installments of what would in 2006 become his first published novel, “Leave Me Alone: A Novel of Chengdu” (成都，今夜请将我遗忘), a dark comedy focusing on scandal, vice, and social contradiction amid China’s rapid economic growth. In 2008, “Leave Me Alone” was long-listed for the Man Asian Literary Prize. Murong has since published four other novels and “The Missing Ingredient” (中国少了一味药), a work of longform investigative journalism about a pyramid scheme that won the 2010 People’s Literature Prize. He was barred from delivering his acceptance speech, which contained a tirade against censorship, and instead delivered the speech to the Hong Kong Foreign Correspondents Club.

In a 2014 profile of Murong for Foreign Policy, Alexa Olsen describes two triggers that in 2011 transformed the promising young novelist to a dissident and activist. The first was a frustrating encounter with the editor for “The Missing Ingredient”; the second was the detention of blogger and activist Ran Yunfei, a close friend of Murong’s. Since 2011, Murong has regularly published opinion articles castigating CCP policies and China’s regime of censorship.

In 2014, while serving as a visiting scholar at the University of Sydney in Australia, Murong published “I, Too, Will Stand Up for Tiananmen” in the New York Times, in which he declared his intent to “turn [him]self in” upon his imminent return to Beijing. In the article, he drew attention to the detentions of his friends Xu Youyu, Hao Jian and Pu Zhiqiang, among others, after a meeting in Beijing commemorating the 25th anniversary of the 1989 Tiananmen crackdown that he himself had been unable to attend. He later posted a “Statement of Surrender” to Beijing authorities online, and was briefly detained days later when authorities invited him to tea. Describing his hours in detention, Murong noted that no questions were asked about his many dissenting columns in the New York Times.

Murong continues to regularly express his opinion on censorship and CCP policies in the New York Times.