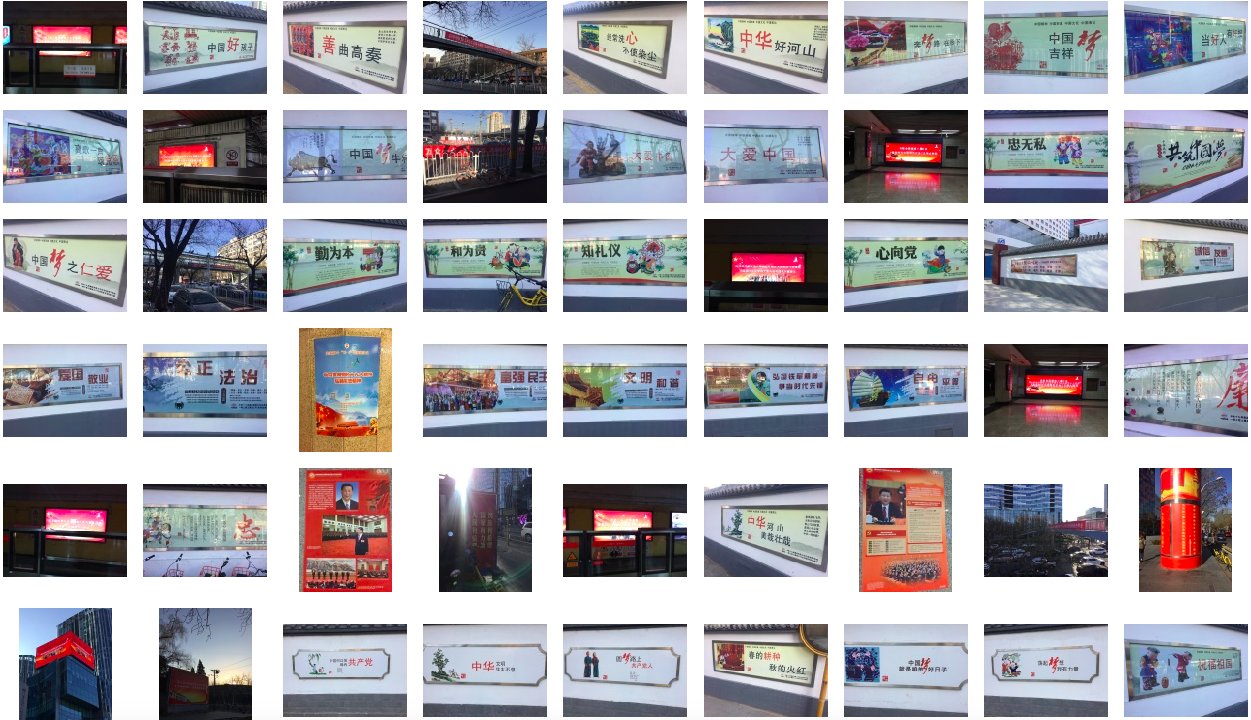 At The New York Times, Javier C. Hernández and photographer Gilles Sabrié present a guided tour of some of the dozens of examples of propaganda along Hernández’ daily commute, covering topics from Xi Jinping‘s "Chinese Dream" and anti-corruption drive to ideology and ethnic harmony.

People joke that it’s now easier in many Chinese cities to use Communist Party slogans rather than street names to give directions.

[…] Mr. Xi’s Beijing bristles with adulation for the party and the president. During my half-hour commute to work at The New York Times bureau here in Beijing, I encounter more than 70 pieces of propaganda.

Billboards emphasize the importance of taking care of parents and being loyal to superiors. Banners urge people to remember the original intention of the Communist Revolution.

Even at home, propaganda is inescapable. I look out a window to see a screen describing China as “united by one heart” and President Xi, China’s most influential leader in decades, as the architect of a national renaissance. [Source]

One example of the rhetoric Hernández highlights is the reference to China’s ethnic groups as "One Family." In 2010, a variant of the slogan—"Tibetans and Han are One Family"—was spotted on a banner on the side of an armored patrol vehicle in a Tibetan part of Sichuan. A satirically photoshopped version of the image was later used to express anxiety at mainland influence in Hong Kong.

While official propaganda may be hard to avoid in the capital, some of the official bodies who oversee it are more elusive according to a 2010 blog post, translated by CDT, by former professor Qiao Mu. Qiao, who left China for the United States last year, shared the post from his new English-language Twitter account this weekend. It describes his summons to the Central Propaganda Department’s headquarters in his former capacity as coordinator for international broadcast news studies at Beijing Foreign Language University.

On Nov. 25 I was again notified to attend a meeting. The notice gave the topic of discussion and the time, but didn’t give the location of the Central Propaganda Department. It said only what floor and what room in the department. The notice requested the name of the attendee and the number of their car be reported to a contact in advance.

[…] But where was the Central Propaganda Department? This place – other than on American satellite images – cannot be found on a Chinese map. I knew it was close to the Party Central Committee, or even itself is the very “Central.” But I didn’t know the exact location or what street it was on. The number I had been called from in the past appeared as eight zeros on my phone. Was this to be mysterious, or just secretive?

I fearfully called the contact number on the notification. “Where’s the Central Propaganda Department?” I got an answer telling me how to get there by car. Fearful again, I said I had no car and that I was preparing to take the public transportation. There was an obvious and dumbfounded silence followed by low, hesitant instructions on which route to take and how to proceed.

The metro arrived in a prosperous Beijing commercial district. I knew the Central Propaganda Department was near, but no matter how I looked I couldn’t find it. I asked several people but they were unsure. I had no choice but to call the contact again and timidly ask for directions. Following the directions, I walked to an unmarked gate. Seeing the armed police post, I figure this was it. Entry was granted only with reception from someone within. Our Party had been the underground party for so many years, only to become the current ruling party. Yet it has maintained the exceptional tradition of its underground secret workings. Even the omnipotent internet is helpless in dealing with this China’s most powerful, influential and longstanding institution. [Source]

Of the meeting itself, Qiao writes, “we must keep our lips sealed.” The CPD has offices at 5, West Chang’an Avenue whose location may not be widely advertised, but is not an absolute secret, and is listed in the department’s Wikipedia entry.