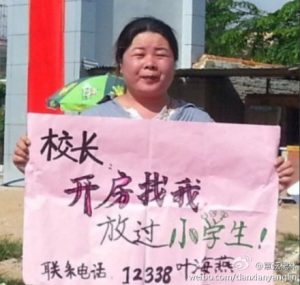 Ye Haiyan holding a protest poster that reads “Principal: spare the school children, get a room with me instead! (Source: Weibo/@單弦杨林)

Born on September 25, 1975, Ye Haiyan is a social worker and women’s and gender rights activist. Also known as Hooligan Sparrow (流氓燕), Ye has since 2005 worked to raise awareness of the plight of Chinese sex workers and campaign against the sexual abuse of children, fiercely advocating on behalf of sex workers and people living with HIV/AIDS. Her high-profile activism has resulted in significant official unease and attention, and she has reported attacks, threats, and pressure.

In 2005, Ye began blogging about the plight of sex workers under the moniker “Hooligan Sparrow.” Her website experienced frequent hacking attacks, and she was maligned as a pimp by web users. That year, she learned that a 23-year-old sex worker and contributor to her website had been murdered. In 2006, she established a rights association and community group that educated sex workers about health issues and advocated on their behalf in Wuhan. By 2009, Ye had become one of China’s leading critics of the criminalization of prostitution, but had won attention from police, and was frequently invited to tea. Following a large protest she organized with sex workers publicly soliciting signatures for a petition to decriminalize prostitution, in 2011 Ye was driven from her hometown and forced to return to Guangxi, where she had been married. After returning to Bobai, Guangxi, she established the China Women’s Rights Workshop (中国民间女权工作室) which provided outreach services and distributed free condoms. Her attempts to register her organization as an NGO failed due to a lack of government support, but her writing and advocacy earned her financial backing from both low income and high-profile supporters, including internationally renowned artist and rights activist Ai Weiwei.

[…] Master Meng Jianzhu [Translator note: Meng is China’s Minister of Public Security]: Hope you can understand the pain of the grassroots. Don’t exploit administrative fees from sex workers, especially the poorest among them. I wish that the Public Security Bureau could issue an internal notice and ask the police officers to stop raiding poor sex workers, particular as the new year approaches. A humble plea from Ye Haiyan, Chinese grassroots women’s rights defender.

[…] Beginning now, I am providing free sexual services for rural migrant workers. First of all, this is to prevent them from being caught and legally robbed by police. Secondly, this is to serve the sexual needs of the grassroots and help relieve social pressure. Thirdly, I want to create a sharp contrast between my love for the grassroots and the cruelty of the government. I hope that they will be touched by my action, which will end tomorrow. […] [Source]

In 2013, Ye led a campaign against a Hainan elementary school principal accused of raping several female students. This campaign along with her earlier activism and the persecution she experienced because of it—including eviction, being the target of angry mobs, and an international travel ban— was the subject of a 2016 biographical documentary entitled “Hooligan Sparrow.”