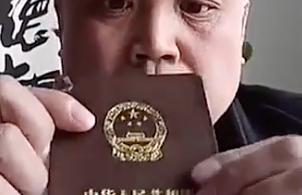 In January, rights lawyer Yu Wensheng had his law license revoked and was then detained in apparent retaliation for his repeated public criticism of Xi Jinping and calls for political reform. On April 19, Yu was formally arrested for inciting subversion and obstructing public servants. This week, RFA reported that he has dismissed his own defense lawyers, according to a handwritten notice shown to his wife.

Such dismissals have been seen repeatedly in the wake of the 2015 "Black Friday" crackdown on rights lawyers. Supporters of the detainees believe they have taken place under coercion in order to guarantee smoothly choreographed trials and help keep detainees isolated and unable to share details of abuses suffered in custody. This apparent strategy by the authorities follows earlier use of lawyer dismissal as a stalling or protest tactic by defendants in political cases. As a defensive measure, vulnerable figures have increasingly recorded pre-emptive disavowals of lawyer dismissals or other coerced actions such as the forced and televised confessions recently examined in a landmark report by the group Safeguard Defenders. RFA’s report on Yu noted his own use of this measure:

[Yu’s wife Xu Yan] said she was allowed to speak briefly with Yu by video chat on Monday.

"I asked him whether they had told him when he could come home, but Yu Wensheng didn’t say," Xu said. "He was pretty quiet on the question of his statement, too, but towards the end, when we’d been chatting awhile, Yu Wensheng repeated two or three times that he had totally lost his freedom and was incapable of doing anything."

Xu said Yu had warned in a video recording and statement in May 2015 that if he ever "lost his freedom" and fired his own lawyers, it should be assumed that he was acting under duress, or had been tortured.

"If I lose my freedom, and if I sign any kind of statement, confession or guarantee in the absence of a lawyer, then none of the words in such documents can be taken to represent my true intentions," the recorded video statement said. "This statement was signed by Yu Wensheng on May 10, 2015."

Xu said Yu was likely alluding to that statement by the repeating the words "loss of freedom." "There is no way that I am going to accept that Yu Wensheng fired his lawyers of his own free will," she told RFA. [Source]

Yu’s video statement that "I will never accept a lawyer appointed by the authorities unless I am tortured" was released on Thursday:

In a statement this week, Yu’s lawyers Chang Boyang and Xie Yang claimed the legal right to meet with Yu to confirm their dismissal firsthand, and stated that until such confirmation could be obtained, they would regard it as invalid. They also expressed concern about Yu’s treatment, and urged the authorities to retain comprehensive video footage of his detention, adding that they would not accept explanations such as power outages, equipment failure, or limited storage capacity should the footage be incomplete.

On 17 April the lawyers of human rights defender, Zhen Jianghua, were also dismissed after having received a notification similar to that which was given to Yu Wensheng’s lawyers. He had also shared with friends and colleagues a written testimony confirming that he would not voluntarily dismiss his lawyers or accept state-appointed lawyers while in detention. Zhen Jianghua, a human rights activist with over 10 years’ experience working in defence of human rights in China. He is the executive director of Human Rights Campaign in China, an organization that campaigns on behalf of arrested human rights defenders and helps the victims of human rights violations to record and publicize their experiences. Zhen Jianghua has been kept in incommunicado detention since he was first arrested him in his home on 2 September 2017. He was formally arrested on charges of “inciting subversion of state power” on 29 March 2018. Following intense intimidation from the authorities, the human rights defender’s family has been very hesitant to speak out about his case.

Hear more on Yu from Bill Birtles at the Australian Broadcasting Corporation, who described him as "the only lawyer willing to speak on camera about human rights issues when I first arrived here."

Police in the southwestern city of Chongqing held a press conference on Monday to make public the latest allegations against [Guo]. In an unusual move in criminal matters, China’s State Council press office invited foreign reporters to attend ahead of time.

The press conference by Chongqing’s Public Security Bureau also aired video confessions from the two brothers, Chen Zhiyu and Chen Zhiheng, who were allegedly paid by Guo to forge the “secret government documents”.

Officials in Chongqing told the press conference the forged documents were “distributed abroad, misleading the public, and creating an evil impact”, according to the Communist Party mouthpiece People’s Daily. [Source]

Read more on Chinese authorities’ latest accusations against Guo from Xinhua and The Financial Times. At The Globe and Mail, Nathan VanderKlippe reported that the two men’s Canadian citizenship has drawn Canada "into the ruthless interplay of elite Chinese politics":

“The suspicion that those confessions were made under duress is, I think, valid because this is a highly politicized case. It’s almost Guo Wengui versus the entire Chinese Communist Party,” said Willy Lam, an expert on Chinese elite politics who is a senior fellow with the Jamestown Foundation, a non-partisan research and analysis firm.

“Certainly, Beijing would hope that Ottawa doesn’t do anything,” Mr. Lam said.

But, he said, ”I think Canadian External Affairs are duty-bound, at least, to find out the facts.”

[…] “When it comes to these confessions involving foreign citizens, almost all of these forced confessions are obviously statements of foreign policy,” said Peter Dahlin, a human-rights activist who himself delivered a confession in early 2016 he says was forced and scripted.

He and others have called for foreign governments to sanction Chinese media who broadcast such confessions, including state outlets with offices in places like Canada. [Source]

Dahlin’s account of his detention and confession is featured in the Safeguard Defenders report. He also discussed the experience in a recent op-ed for The New York Times. Whatever the truth of the brothers’ confessions, the report noted that "the broadcast of any confession on state or regional television should be regarded as a violation of human rights and the right to a fair trial and is equally condemned by Safeguard Defenders."

Cornell University’s Magnus Fiskesjö has been another persistent critic of both the televised confessions and of media organizations like the South China Morning Post who have helped create or disseminate them. He addressed the issue again in this quarter’s "Made in China" journal from Chinoiresie:

These fake confessions represent a modernised version of Stalin’s show-trials. They violate both international and Chinese law, and several prominent Chinese judges and legal officials have protested bravely, arguing that legal matters are supposed to be decided in the courts, not on television (Fiskesjö 2017). The spectacles fly in the face of the painstaking effort to build up the ‘rule of law’ in China over the decades since Mao’s death. But today, we no longer hear the admonitions, previously issued by Chinese judicial authorities, to stop police torture and forced confessions (Xinhua 2012). In the increasingly harsh environment inside China, it has become too dangerous to openly criticise these spectacles.

[…] We actually already know a lot about the concrete procedures behind these fake confessions, and in substantial detail. Multiple victims, when regaining a chance to speak freely, have given us accounts of how it works. Recent major examples include Gui Minhai’s heroic colleague Lam Wing-kee and the brave female lawyer Wang Yu—both of whom spoke out despite the immense risk of repercussions (France 24 2018; HKFP 2016). Several foreigners detained and treated according to the same program have also given us similar accounts, including another Swedish citizen, Peter Dahlin (China Change 2017). The victim is intimidated through a series of measures that can be called modern ‘clean’ or ‘stealth’ torture (Rejali 2009): sleep deprivation, extended isolation, being forced to stand for long periods, excessive heat or cold, threats against family members and colleagues on the outside, and so on. These measures will break down almost anyone. In the end, very few of us, if any, would refuse to read the script for the cameras.

[…] We are talking about a political crime wave, orchestrated by a government-run propaganda machine that uses living human beings as props and tools for political influence. To be sure, there are other comparable examples, such as the Islamic State in its infamous victim videos shot just before their execution. But China’s campaign is especially dangerous because of the country’s increasing weight in the world, which it is now throwing around in order to re- define the ‘truth’ by force. We should not let them. [Source]