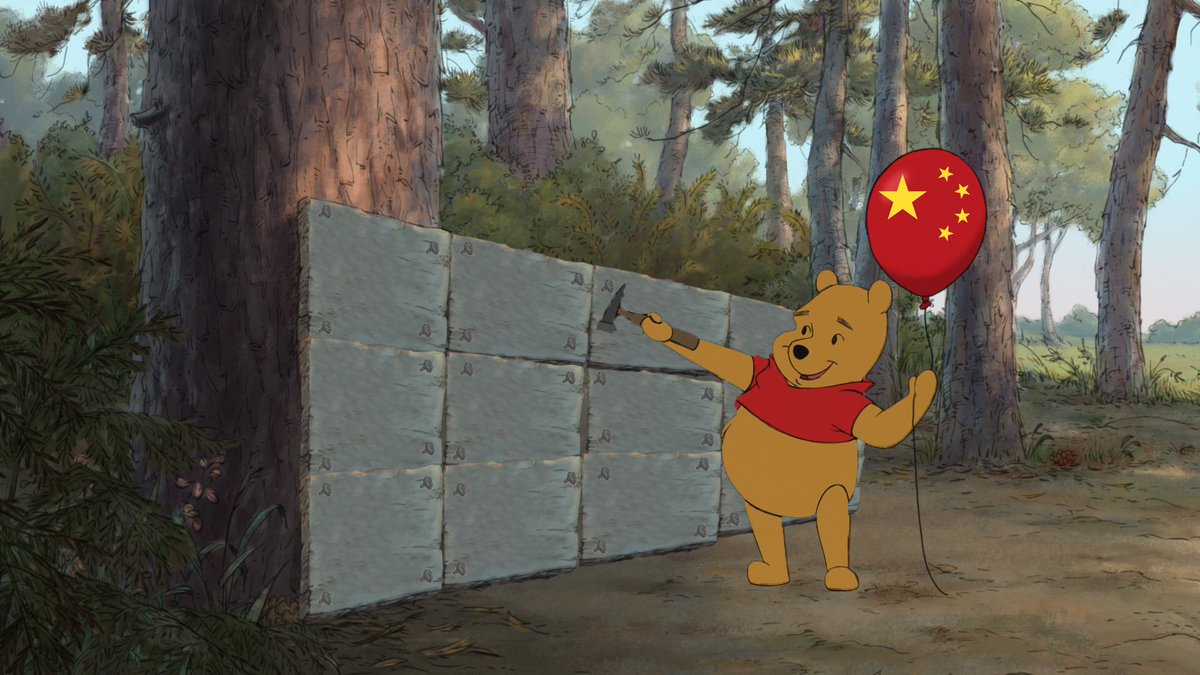 [Opening Twitter Address] Hello all online friends: The Communist Youth League’s official account is now online! Here we will pass on information about the Party caucus, listen attentively to the voices of the youth, share stories of youthfulness, spread youthful energy, and serve the needs of the youth. We will build a bridge for connecting the youth to the organized system through communication. We look forward to your attention and support!

[Meme mocking a 2012 official statement on “national rejuvenation,” an official campaign that has been heavily promoted under Xi’s tenure, explained in the archives of China Digital Space]

Since that inaugural tweet, the anonymous operator of the handle has continued regularly posting snarky comments and memes critical of Xi Jinping and the Communist Party of China from this parody account, often mimicking the brand of rhetoric used by official accounts online. Bearing the username “Communist Youth League in Exile,” the current bilingual account description reads “Parody • Counterfeit account certified by the Central Committee of the Communist Youth League •  Ranked first in the Wanted List •  Offering the best Chinese politically satirical jokes •  Best Political Satire in China • Unless otherwise noted, all tweets are fake news • fake news only” [italics indicate English in original account description].

The parody account quickly caught the attention of CCP authorities, who officially complained to Twitter about the handle fast enough to attract the attention of Reuters within days of that first tweet. @ComYouthLeague became one of 27 accounts bearing a username suggesting official affiliation with the Communist Youth League to be labeled imposters by the CCP.

According to CDT founder and editor-in-chief Xiao Qiang, due to the increasingly harsh penalties for political critique, and the ever-reinforcing system of online controls enacted by the CCP, “the ‘Communist Youth League in Exile’ Twitter account can only use its honest mockery of Xi Jinping to shed light on this harsh reality to those outside of the Great Firewall.”

CDT has translated a selection of recent tweets from @ComYouthLeague. While much of the humor may be lost in translation, Xiao notes that “it’s not about how funny they are, it is about someone (who is likely living inside of China) still expressing his or her brave critique of Xi in such a manner. It is the courage that matters here, not the humor.”

[Shandong Creates VR Test of Party Nature] Zouping, Shandong Party Spirit Education Service Center meticulously designed the Party Spirit VR Examination Center. The VR scene centers on General Secretary Xi Jinping’s “Roll Up Our Sleeves and Work Hard” address. If one fails to test for suitable Party spirit in the VR scene,  experts will be consulted and a treatment plan will be enacted to allow the Party member to recover their Party spirit.

[Xi Jinping Meets Kim Jong Un] On Monday North Korea’s highest leader Kim Jong Un took a special train to Beijing. Chinese President Xi Jinping amiably received him in his office. Having not visited China for many years, it was hard for Kim to keep from feeling a little bashful. Xi Jinping confidently held Kim Jong Un’s little hand, invited him to sit by his side, and said that the bond between China and North Korea is built upon blood, that here they are considered one family, and family should often come to sit and chat as such.

[Unafraid of Sanctions, ZTE Develops a Human-Arranged Computer] The U.S. has implemented a ban on ZTE microchips, but ZTE continues to innovate. Inspired by “The Three-Body Problem,” they have developed a human-computer, with each part of the machine made from humans and a flag used instead of binary code to perform its operations. As of now, the human-computer can already complete junior high-level* operations, and is predicted to soon reach the PhD level. This will thoroughly bid farewell to the American microchip restrictions.

[*”Junior high-level” is a reference to Xi’s pejorative nickname “junior high student” (chūzhōng shēng 初中生). Xi’s education was interrupted during the Cultural Revolution, and there have been allegations that Xi may not have legitimately earned his higher degrees. This nickname is often used following a public gaffe by Xi.]

A short summary of the China-U.S. trade war

Official announcement! In the initial battle of this trade war, China was victorious! The victory lasted 17 hours, 17 minutes, and 26 seconds.

[China-NK Relations Placid on the Surface, but are Maintained by Intimate Contacts in the Background]  The Ministry of Foreign Affairs has refuted rumors that China-DPRK relations have chilled in recent years. While the world has noticed that China-North Korea dealings have lessened, background communications have not been interrupted, and the Sino-Korean friendship has unceasingly deepened.

We’ve heard that a certain fool is busy building a wall*.

[*In late March, the official Weibo of Party mouthpiece People’s Daily posted a comment critical of recently announced U.S. tariffs on China, including the phrase “The sage builds a bridge, the fool builds a wall” (智者建桥，愚者建墙). This is also an allusion to China’s “Great Firewall,” which has been heavily reinforced under Xi’s rule.]

The Helmsman of the Nation, the Leader of the People

The frequent occurrence of Winnie-the-Pooh as a representation of CCP General Secretary and PRC President Xi Jinping alludes to a long sensitive nickname that netizens applied to Xi in 2013.

Just as official Party organs attempted to force the Chinese-language @ComYouthLeague account off of Twitter last year, the official Party mouthpiece People’s Daily made a similar bid to have @relevantorgans, an account parodying China’s English-language soft power moves, booted in 2014. @relevantorgans is still posting as of May 29, 2018:

Beijing-based foreign journalist friends, please be careful when hitting “Reply All.” We put a lot of effort into spying on you individually, and we hate to feel like it was wasted.