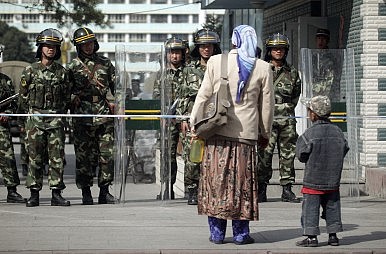 Authorities in Xinjiang have detained an estimated one million or more Turkic Muslims in “re-education” camps and turned the region into a frontline laboratory for draconian surveillance methods that have since expanded to Muslims in Gansu. Now, Gansu authorities are following the Xinjiang model in shutting down a 34-year old Arabic language school that supports underprivileged students, raising fears that such religious controls will only continue to tighten across China’s Muslim communities. At Inkstone, Mimi Lau reports on the school’s impending closure:

Pingliang Arabic School, a charity that caters to underprivileged students, has been told by city education officials to close by December 17 and send its 200 students and 20 teachers home.

Officials claim the school does not have the operational permits it needs, although it has been in business since 1984 in Pingliang: a poor, small city on the border between Gansu and Shaanxi province.

[…] Facing a deadline to shut down before next Saturday, teachers at Pingliang Arabic School last week sent a petition containing more than 1,000 signatures to the education bureau.

[…] “It seems that the officials are not interested in talking to us at all,” said the teacher, who requested anonymity.

[…] “If the school is closed, they could end up as dropouts on the street.” [Source]

“The controversial re-education centres are among the measures used but that doesn’t mean Hong Kong should borrow the idea. As a matter of fact, we have no such needs due to the differences in terrorism situations we each face.”

[…] “The response time to terrorist attacks in Xinjiang is just one minute, to avoid mass casualties. It is worth knowing how they manage to execute such a prompt response,” the source continued.

On a similar mission, security minister John Lee Ka-chiu will next month lead the unit chiefs to Beijing and southwestern Yunnan province.

Islamist terrorists have been said to be using coastal routes to slip into Xinjiang via Myanmar and Vietnam and then Yunnan in recent years.

Beijing is increasingly drawing international criticism for its ongoing crackdown in Xinjiang. Despite this, it has refused to back down. Instead, it has sought to legally justify the camps as vocational training and Mandarin instruction centers, released glowing portrayals of life inside the camps, used U.S. “War on Terror” rhetoric, and threatened retaliation if the U.S. sanctions Xinjiang Party Secretary Chen Quanguo under the Global Magnitsky Act.

On November 26, an international group of scholars issued a joint statement—which now has over 600 signatories—calling for worldwide action against China for its “mass human rights abuses and deliberate attacks on indigenous cultures presently taking place in China’s XUAR [Xinjiang Uyghur Autonomous Region].”

Human Rights Watch has also sent a letter to EU foreign and interior ministers requesting that the entire EU expedite Turkic Muslims’ asylum claims, and suspend deportation of Turkic Muslims back to China until it ends its widespread repression in Xinjiang.

The Organization of Islamic Cooperation has also been briefed on the Uyghurs’ deteriorating rights in Xinjiang:

During its recently concluded 14th Regular Session held in #Jeddah from 02-06 December 2018, @OIC_IPHRC was briefed on the #humanrights situation of #Uighur #Muslims in #China's #Xinjiang region, which shows rising discrimination on the basis of their religion. 1/ pic.twitter.com/Ekgx49dIkV

@OIC_IPHRC expressed concern on these disturbing reports on the treatment of #Uighur #Muslims and expressed hope that #China which has excellent bilateral relations with most #OIC countries as well as the #OIC, would address the legitimate concerns of Muslims around the world. 4/ pic.twitter.com/F2jDfjgD99

@OIC_IPHRC also recalled that the Constitution of #China provides clear and full guarantees for the right to freedom of #religion and belief, which makes it obligatory on its authorities to ensure the exercise of these rights by all its nationals. #OIC #Uighur #Xinjiang 5/ pic.twitter.com/SXHhrdvNCC

Now, a new report from RFA shows that starting in April 2017, several hundred residents of a Kyrgyz village have been sent to re-education camps for possessing “strong religious views” and “politically incorrect” ideas. The report claims that the Kyrgyz had enjoyed a relatively high degree of freedom prior to Chen’s arrival.

Reuters worked with Earthrise Media, a non-profit group that analyzes satellite imagery, to plot the construction and expansion of 39 of these camps, which were initially identified using publicly available documents such as construction tenders. The building-by-building review of these facilities revealed that the footprint of the built-up area almost tripled in size in the 17 months between April 2017 and August 2018. Collectively, the built-up parts in these 39 facilities now cover an area roughly the size of 140 soccer fields.

Construction notices published on local government websites, including tenders and procurement requests, have provided clues about the location and features of many of the camps. The technical specifications in these documents include references to guardhouses, surveillance systems that leave “no blind spots,” automatic weapons and their safe storage.

[…] “I was immediately struck by how many camps there were, how large, and how quickly they are growing. In a matter of months they are throwing up five-story buildings, longer than football fields, lined up in rows in the desert,” said Edward Boyda, co-founder of Earthrise. “The construction and arrangement of buildings is very similar from site to site, in the new sites especially, which means there is a method behind it.” [Source]