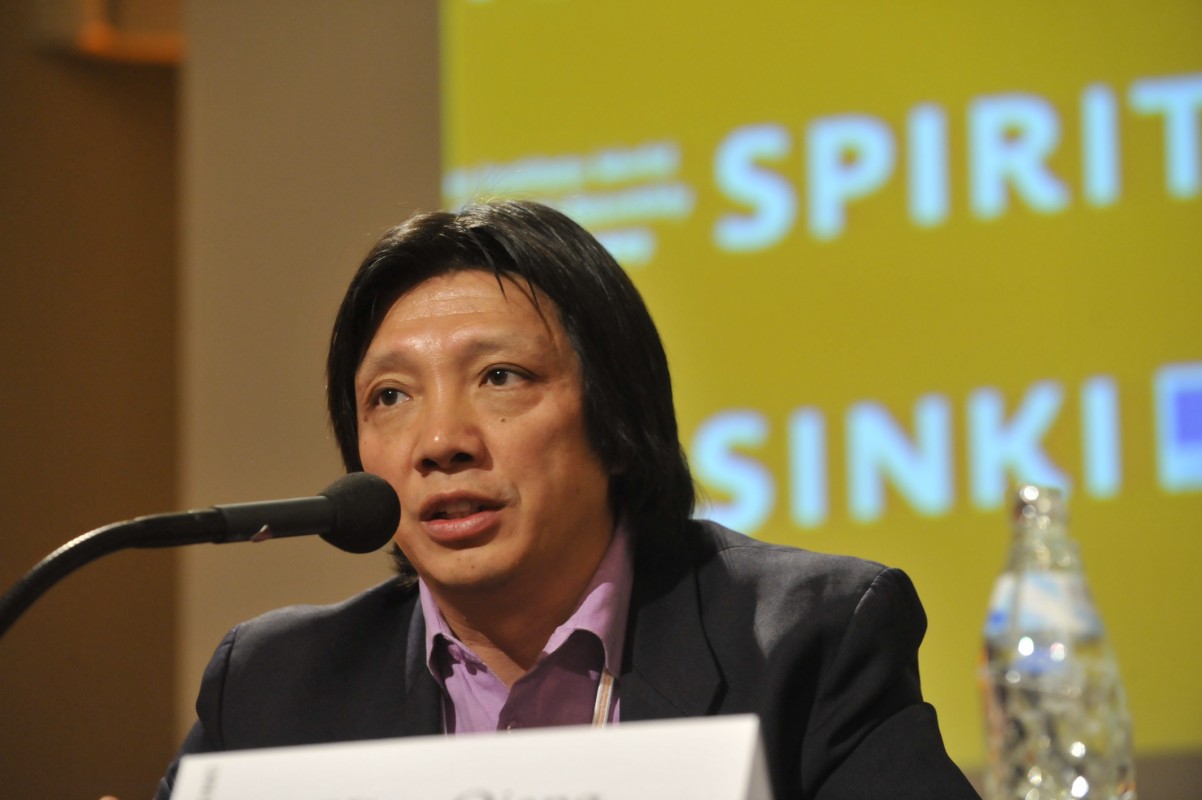 As part of their ongoing series “Internet Contest,” Radio Free Asia’s Mandarin Service last month interviewed China Digital Times’ Founder and Editor-in-Chief Xiao Qiang. CDT has translated the interview in full, in which Xiao discusses what led him to a career as a human rights activist, the beginnings of CDT, and CDT’s work covering internet censorship in China. The host’s descriptions of  regular series and general content focus on the CDT Chinese site, though CDT English does regularly translate some of this content (most notably the “Directives From the Ministry of Truth” series).

Hello listeners, we welcome you to RFA America’s special program “Internet Contest,” I am your host Xiao An.

Dear audience, on the Chinese internet, which sensitive topics are limited from discussion? Which are deleted or blocked, which WeChat accounts have been sealed? These are all questions that RFA is concerned with. In this respect, we’ve already quoted information from U.S.-based Chinese website China Digital Times many times. What kind of website is CDT? How do they monitor China’s censorship situation? That is what we’ll look at in today’s program.

CDT was founded by Professor Xiao Qiang, who teaches at the University of California Berkeley. Its English site launched in 2004, and the Chinese site opened in 2009. Its content is a collection and aggregation of official actions to block and censor Chinese media and websites.

CDT Founder Xiao Qiang earlier served as the executive director of Human Rights in China, a New York-based civil society organization. He later was awarded the MacArthur Genius Award, which is given to those displaying outstanding talent in various fields. RFA has interviewed Xiao Qiang. Let’s first listen to Mr. Xiao recount the creation of the China Digital Times website.

Host: Mr. Xiao Qiang, in 1984 you graduated from the University of Science and Technology of China, and in 1986 arrived in the U.S. to begin a PhD in astrophysics at Notre Dame. How did you go from a PhD student to a human rights activist? This is quite a big transformation.

Xiao: It was because of June 4, 1989, because of the Tiananmen student protest and the massacre it brought about. I was in the U.S. watching all of this, and hoping to do something for the cause of China’s democracy, to help the Tiananmen students continue towards completing their task. I joined an organization for Chinese students abroad, and left my PhD program. In 1991 I went to New York to work as the executive director of Human Rights in China, which had been set up by overseas Chinese students.

Host: Doing this type of work requires a lot of courage. Afterwards, you went to the University of California Berkeley campus to teach, and it was there that you established China Digital Times, right?

Xiao: This is after I received the MacArthur prize, which encourages innovation. I handed Human Rights in China to my successor, and then went to the UC Berkeley Graduate School of Journalism to teach human rights courses–I hoped to gain new knowledge, in part related to my original study of physics, but also because new technology had the potential to provide more freedom in China.

Host: So the CDT project was your own creation?

Xiao: Yes. It was a website that I set up while teaching that later was retained as a news project. In 2006 the site was blocked by China’s Great Firewall. Due to my human rights activism background, I always paid attention to what was being censored in China, to deleted information. At that time, since China’s economy was emerging, the U.S. was also engaging with China. There were very few individuals or groups genuinely publishing on or pointing out China’s censorship system.  I take the perspective of news-watching, but also that of a human rights activist. It is our responsibility to publish information suppressed by the Chinese internet.

On CDT’s website, “River Crab Archives,” “On the Record,” and other columns track the censorship situation on Sina, NetEase, Douban and other Chinese websites and mobile platforms. Additionally, the “Sensitive Words,” “Fifty-cent Observations,” and “Directives from the Ministry of Truth” series track sensitive topics such as banned words, propaganda instructions, and policy changes for China’s network censorship. Now we will continue to listen to the interview with Mr. Xiao Qiang.

Host: The information provided by CDT is very important. Words that are sensitive on the Chinese internet are published on the site. For example during the “Third Plenary Sessions” period, “incapable ruler,” “shameless,” and “throughout the ages.”… These are sensitive words, that is forbidden search terms, on Weibo that you collected. What means do you use to detect this online censorship?

Xiao: This is something that we are always striving for. Really, our work has two parts. One part is to directly follow Chinese social media. Despite the efforts of the internet censors, it is impossible to delete everything, and there will always be people who send deleted content, even send them to foreign social media. We also develop some technology that automatically tracks microblogs, WeChat, and other blogs. But most importantly, this content is not what we say, it is content created by Chinese netizens. All we do is record the voices of these netizens and the actions of the censors.

Host: Your website also has the regular column “Ministry of Truth.” This is the general name that netizens have for censorship agencies such as the Central Propaganda Department and the Cyberspace Administration of China. Now that column has a section for the 2018 U.S. midterm elections, which says: “regarding the US midterm elections, do not conduct live broadcasts or aggregate special topic pages. Do not cite foreign media reports, and do not conduct reporting without prior arrangement.” How do you obtain this information?

Xiao: That column attracts a lot of attention. The instructions released by these propaganda departments are supposed to be confidential, what we collect is only a very small part of all Chinese propaganda directives. These are leaked by those in China who are discontented with online censorship. They will leak on Chinese or overseas social media, or in other hidden places. We occasionally find them online due to our experience [monitoring social media platforms]. Our additional responsibility is to verify them [before publication].

Xiao: The “Ministry of Truth” name comes from Orwell’s “1984.” The allegory of this political novel is that a totalitarian government is made of many departments, one of which is the Ministry of Truth, which specializes in manipulating the news, revising history, providing people information that the regime wants them to know and limiting them from what the regime doesn’t want them to know. The novel’s Ministry of Truth does precisely what China’s Propaganda Department does.

Xiao: Yes, this is what netizens call it.

Listeners, welcome back to RFA’s special program “Internet Contest.” CDT not only tracks the status of China’s network monitoring and censorship, but also pays attention to updates in China’s network review technology.

Mr. Xiao Qiang believes that the intensity of Chinese censorship is gradually increasing, amazingly, which makes it even harder for netizens to make it over the Great Firewall. Here is the last part of our interview.

Xiao: After Xi Jinping took office, internet censorship greatly increased in terms of labor power and [technical] resources, as did measures to arrest people, the organization and scale of the 50 cent army, which is now completely different than it was before 2012.   To use the Chinese government’s phrase, this is called, “clearing up the internet space,” and greatly suppresses freedom of speech. New methods are plentiful, one of which is the use of big data and AI to more effectively discover “politically harmful information,” and quickly find and delete and undesirable public opinion. We used to think that IT would increase the public’s ability to access information and allow the people more convenient exchanges and opportunities for expression, that it would benefit democratization. This was only half the truth. On the other hand, technology has greatly increased government control of the internet and information. I didn’t previously see that.

Host: At the beginning of November, China received the UN Human Rights Council periodic review. The Ministry of Foreign Affairs vice chief Le Yucheng dismissed the view that “China suppresses the freedom of expression.” He said, China has 800 million netizens, making China the world’s greatest source of information. This is his point of view.

Xiao: It is his point of view. He didn’t say how much information is deleted in China. He also said “it is  speech that allows the incitement of separatism, hatred, and terrorist extremism. Is that called free speech?” Much of the content on CDT is deleted from China’s internet. Please ask him, what of that incites separatism, hatred, and terrorism?  Why was it deleted? Can he answer that? Will he debate with me? If he doesn’t allow others to speak, if he arrests those who express different views or deletes that speech, that makes his speech the “truth.” But for me, what he says are not the facts.

Host: Listeners, this program allowed us a comprehensive introduction to U.S. website China Digital TImes, which follows developments in China’s internet censorship. This concludes our “Internet Contest” special program. If you have the opportunity to visit foreign websites, you are welcome to search for our RFA website, and of course also CDT. I am moderator Xiao An, thanks for listening and we will see you next time. [Chinese]