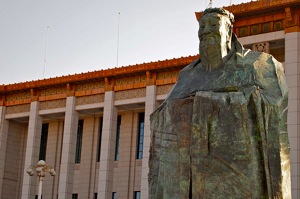 Waves of U.S. and international universities have closed down Chinese government-funded Confucius Institutes due to academic freedom concerns. Now, after determining that Beijing has been using them to downplay Chinese economic and security threats, the Senate Permanent Subcommittee on Investigations has recommended ending over 600 such programs at U.S. schools and universities. At the Wall Street Journal, Melissa Korn and Kate O’Keeffe report on how this marks the U.S.’ strongest action yet against the institutes:

The bipartisan report also accused the Education and State Departments of poor oversight of the programs, which have been flagged by U.S. counterintelligence officials, and said that if the Institutes aren’t shut down, the Justice Department should consider requiring their Chinese government-selected teachers to register as foreign agents.

[…] Meanwhile, the report found, China has blocked U.S. cultural outreach in China, citing at least 80 examples from January 2016 to July 2018, as documented by the State Department.

Seven of 29 “American Cultural Centers” promoted by the State Department never opened because they were hindered by the Chinese government, and Beijing interfered in the operations of the others, the report found.

[…] It also said that while Education Department rules require colleges and universities to report foreign gifts of $250,000 or more, nearly 70% of U.S. schools that hit that threshold from Hanban didn’t properly do so.

[…] The subcommittee cited an October letter from Sen. Chuck Grassley (R., Iowa) to the U.S. Attorney General, saying the activities of the Confucius Institutes “show that they are inherently political in nature and intended to influence U.S. policy and public opinion,” which “falls squarely within the scope of” the Foreign Agents Registration Act. [Source]

Senate investigators uncovered no evidence connecting the Confucius Institute with Chinese espionage, an increasing U.S. concern that has prompted the Trump administration to step up its monitoring and enforcement efforts at American campuses.

But the investigation, which was earlier reported by The Times, found that the Chinese government had provided about $158 million over the last 13 years to establish and run more than 100 Confucius Institutes in the United States, including seven in California, to promote the study of Mandarin and Chinese culture at universities and K-12 schools.

Chinese Embassy spokespersons in Washington did not respond to requests for comment. The director of the Confucius Institute U.S. Center, a kind of public relations and support office for the programs, denied that the Chinese government has had a big hand in the operations of Confucius Institute centers as the report indicated. [Source]

The full Senate report can be read here, alongside a Government Accountability Office (GAO) report containing interviews and analysis of nearly 100 contracts between U.S. universities and Confucius Institutes. At Inside Higher Ed, Elizabeth Redden digests both government reports:

[The Senate report] alleges that “the Chinese government controls nearly every aspect of Confucius Institutes at U.S. schools,” down to having veto authority over events and activities included in the annual budget submitted for approval to Hanban. The report also says that “Hanban provides no information to U.S. schools on how candidates for Chinese director and teacher positions at Confucius Institutes are screened or selected in China” and that U.S. colleges are therefore unable to judge if these practices are in accordance with their own hiring practices.

[…] “Officials at 10 case study schools told GAO that they do not use materials provided by Hanban for credit-bearing courses, and school officials stated that Hanban did not place limitations on events of any type,” the GAO report states. “Nonetheless, school officials, researchers and others suggested ways schools could improve institute management, such as by renegotiating agreements to clarify U.S. schools’ authority and making agreements publicly available.”

[…] Among other recommendations offered by college officials interviewed by GAO researchers, one administrator argued that universities should eliminate the Chinese assistant director position; this administrator said his college’s CI “would never have a Chinese assistant director because the position suggests an excessive degree of Chinese influence.” A few officials also recommended that the CIs should not be involved in teaching credit-bearing courses (the involvement or lack thereof of CIs in teaching credit-bearing courses varies across institutions). One suggested that the CI should physically be relocated to an external location off the campus.

Finally, officials from two of the universities in the case study “stated that schools should organize events through the institute specifically intended to address what some might perceive as a topic sensitive to Chinese interests to demonstrate the school and institute were not subject to undue Chinese influence.” [Source]

Efforts to close down more institutes worldwide have continued. The University of Minnesota will close its institute by the end of the semester. A Tibetan-American student at Portland State University launched a petition calling on its board of trustees to shutter their institute. In the Netherlands, its last remaining institute in Groningen will be subject to a “critical look”:

Confucius Institute in Leiden already slated to leave. Last remaining one in the Netherlands is in Groningen. Now the municipality and university there announce they will take a ‘critical’ look after Dutch tv documentary. https://t.co/rBHDJKyje8

The documentary also reveals that the President Poppema of the University of Groningen was a member of the global board of the Confucius Institutes while negotiating with Dutch and Chinese governments over a campus in Yantai, pushing on seemingly blind for reason.

Assisting the University of Groningen in negotiating for the Yantai campus was the director of the Groningen Confucius Institute. The university has just announced it will 'compensate' 669,000 in tax-payer money used for the failed plans in breach of spending rules.